Bank crashes and the Basel Accords

I need information and understanding - please help me, somebody.

I've pointed out more than once that M4 bank lending in the UK accelerated from 2003 on, and I suspected it was something to do with reducing bank capital adequacy requirements, so the government (via its regulators) would have been implicated. In other words, I've been looking for the villain of the piece, and the smoking gun. 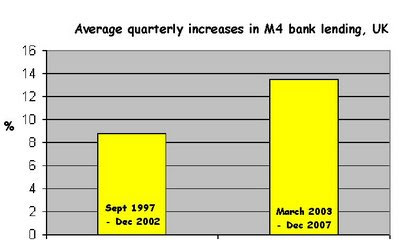 But do you think I can find them?
What I have found so far is references to the Basel Accords, Basel I and Basel II. Basel I became law in the G10 countries including the UK in 1992, and Basel II was published in 2004. The general drift, I understand, is to encourage a uniformity of approach to systemic financial risk, and to introduce a system of risk-weighting bank capital according to what the banks are lending against or investing in. What a success that has proved! Perhaps we should refer to the scheme as "Basel Fawlty".
But can somebody help unpack and simplify what actually happened? Is it, for example, possible that this system was perceived by the banks as a more pliable alternative to fixed minimum reserve ratios, and so they reduced the cash in their vaults to the very least that they could tweak the definitions? For example, we have read many times how mortgage-backed securities are at the heart of the subprime problem, because the packages could be represented as having much less risk than they actually contained.
So is the present crisis an unintended consequence of more elastic international regulation, dating back as far as the early 1990s?

No, the current crisis was merely a symptom of the attempt to lower interest rates centrally in order to force banks to spend more to get us through the last recession without pain (and thus still voting Labour). Banks need to shift a higher volume of loans if interest rates are reduced from say 10% to 5% - in fact double. They need to do this at a time when income from savings is low. In order to do this they must do the following:-

1] Sell loans to people that don't normally qualify for credit

2] Get the loans off their books so they can play the fractional reserve lending game without falling foul of the rules on holding reserves.

In order to achieve [1] they sold 125% loans to people that barely had an income and had a poor credit history. They gave away credit cards without doing credit checks, often with enormous credit limits. They gave people loans against mortgage equity so the average equity in the mortgage market fell dramatically. They bailed out failing companies for years getting dubious collateral in return. They funded mad "private equity" deals in the crazy belief that a management team with debt to pay will perform better than a management team with no debt to pay.

Its all down to a government that is quite mad enough to believe that you can stimulate an economy to avoid the pain of recession by reducing interest rates to ridiculous levels. Inspired by John Maynard Keynes. I go Labour through the last election and judging by the polls there is every chance it will do so again. I used to wonder how Goebbels got away with his lies to the German people towards the end of WWII, but now I have seen the same propaganda used here in the UK and it works a treat! There seems to be no limit to the dim-witted voters easily lead by a government hell-bent on keepng its hands on power. I look forward to buying their homes from under them in a few years time at knock down prices.

Thanks for that, Anon, and many will second you. I'm just wondering whether the accords gave the banks the chance to trim reserves even further to permit the lending spree.