ART: The use of paint in paintings, by JD

This first painting is a copy of Goya's "El Quitasol" which I did more than thirty years ago. I used Winsor & Newton oil paints and, as you can see, the colours are clear and vibrant. It is about A4 size on canvas-textured paper suitable for oil painting. It has been stuck to the wall with blu-tack for the last twenty years! 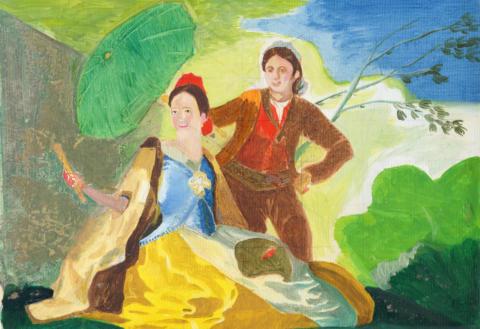 Obviously I am nowhere near as good as Goya but I am pleased with my effort and it is surprising how much you can learn just by copying one of the masters.

Speaking of mini masterpieces, readers may like this site:

Thank goodness it was affordable, otherwise perhaps we'd never have had that masterpiece:

and an art programme I saw recently said the blue in the Wilton Diptych was in part a demonstration of the king's wealth, that he could afford so much lapis pazuli for the painting.

Good stuff, JD! So, painting is much more than being able to depict reality, on paper or canvas - or even to depict unreality. There's the issue of materials - all too real!

Sackerson's comment relating to the colour blue reminded me of something I read about American artist Maxfield Parrish's famous vibrant signature blue:

"He was and still is associated with a particularly vibrant shade of blue that blanketed the skies of his landscapes, although you will only rarely see a glimpse of that color in reality. And it was not easy for him to render. He devised a laborious technique using base of cobalt blue and white undercoating, which he then glazed with a number of thin alternating coats of oil and varnish. The particular resins he used, called Damar, are known to floresce a shade of yellow-green when exposed to ultraviolet light, giving the unique turquoise hue to the painted sky."

Clip from this blog
https://artsenclave.wordpress.com/2010/01/18/how-maxfield-parrish-got-so-blue-2/

The way you work with colours is quite special. The photo I provided is a poor substitute of your painting. The photo does not show the vibrancy of the colours or the 3D effect that lures me into the painting (which is on the wall behind me as I type) :-)

Looking forward to seeing more of your paintings :-)

I always felt JD to be a fabulous artist in his use of colour, not a long way from the primitivists and that is no insult.