At #5 is Leroy Vandyke with 'Walk On By':
Giles cartoon for this week: The first American in space 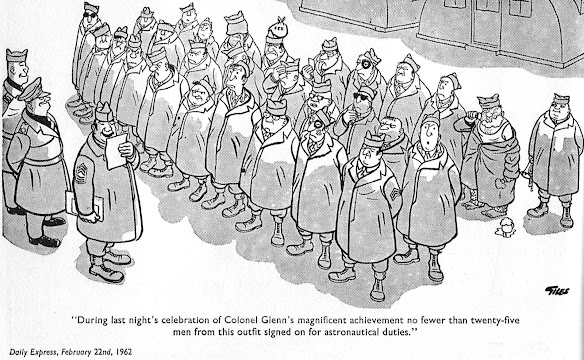 (See 20 February below for details of John Glenn's historic spaceflight)
Some memorable events (via Wikipedia):
18 February: 'Two pilots of the French Air Force, described as "renegades", defied orders, broke away from a routine mission over French Algeria, flew their planes across the border into Morocco, and then attacked a rebel camp in the city of Oujda with rockets and machine gun fire. The two, believed to be members of the Organisation Armée Secrète, then flew their planes to Saïda, Algeria, landed, and deserted.'
20 February: 'The United States placed an astronaut into orbit for the first time, as John Glenn was sent aloft from Cape Canaveral aboard on third Project Mercury mission, in the space capsule Friendship 7. Glenn was launched at 9:47 a.m. local time and attained orbit 12 minutes later. After three circuits of the Earth, Glenn left orbit at 2:20 p.m., landed in the Atlantic Ocean at 2:43, and was recovered by the destroyer U.S.S. Noa at 3:04. Glenn, the first American astronaut, returned to outer space on October 29, 1998, at the age of 77, becoming the oldest man to orbit the Earth.'
21 February: 'Margot Fonteyn and Rudolf Nureyev first danced together, in a Royal Ballet performance of Giselle at Covent Garden in London, creating one of the greatest partnerships in the history of dance. Nureyev had defected from the U.S.S.R. almost eight months earlier on June 16, 1961. He and Fonteyn received 23 curtain calls from the audience.'
'On the day after John Glenn's historic flight, Soviet Premier Khrushchev sent a telegram to U.S. President Kennedy, proposing that the two nations co-operate on their space program. The first joint venture took place in 1975.'
22 February: 'Pope John XXIII signed Veterum sapientia ("Ancient Wisdom") as an apostolic constitution, the highest possible papal decree. The declaration, published the next day, directed that Roman Catholic seminary students should not only be instructed on the use of the Latin language, but that lectures should be given in Latin, "a bond of unity between the Christian peoples of Europe". The Pope also prohibited priests from arguing against the use of Latin, and created an institute to create new words in Contemporary Latin to keep it apace of modern developments. In 1963, the second Vatican council approved an order retaining Latin for specific rituals, but native languages for most other purposes.'
23 February: 'Astronaut John Glenn arrived in Cape Canaveral to a hero's welcome and was reunited with his family for the first time since before going into space. U.S. President John F. Kennedy, for whom Cape Canaveral was renamed during the 1960s, greeted Glenn and personally awarded him the NASA Special Services Medal. Kennedy praised Glenn for "professional skill, unflinching courage and extraordinary ability to perform a most difficult task under physical stress." It was then that Glenn revealed in an interview that the heat shield on his capsule began to break up upon re-entry, the loss of which would have been fatal. Glenn calmly said, "it could have been a bad day for everybody."'
24 February: 'The United States government began its first telephone and television transmissions via satellite, bouncing signals off of Echo 1, which had been launched on August 12, 1960.'
UK chart hits, week ending 24 February 1962 (tracks in italics have been featured previously)
Htp: Clint's labour-of love compilation https://www.sixtiescity.net/charts/61chart.htm 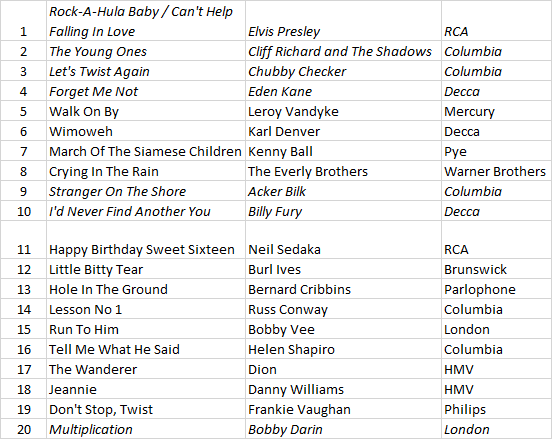