WEEKENDER: The Winds of Change, by Wiggia

Road racing until recently has never had black champions, in fact hardly any black riders in the top flight, but in 2015 there was a breakthrough when Daniel Teklehaimanot, an Eritrean, became the first black African rider to earn the polka dot best climber’s jersey which he held for a period during that year's Tour de France; he also won the climber's jersey in the prelude race to the TDF, the Critérium du Dauphiné.
The fact he comes from Eritrea is interesting. Much is made of cycling being an expensive sport and that prevents poor blacks in African countries and elsewhere from even thinking about taking up the sport. Recent efforts by a South African team to promote black riders in the European races were made by MTM – Qhubeka; the team has had a mixed start in pro cycling and its original aim to have an all black squad had to be watered down as there simply were not enough high quality black riders to fill all the places. Chris Froome has been running a foundation in Kenya, his birthplace, to promote local riders but so far without any results.
Fast forward to this year and the big breakthrough has occurred; last week the first of a series of one day races held in Belgian and northern France known as the Spring Classics and including three of the world's most prestigious road races was kicked off with the minor classic, the Gent-Wevelgem. 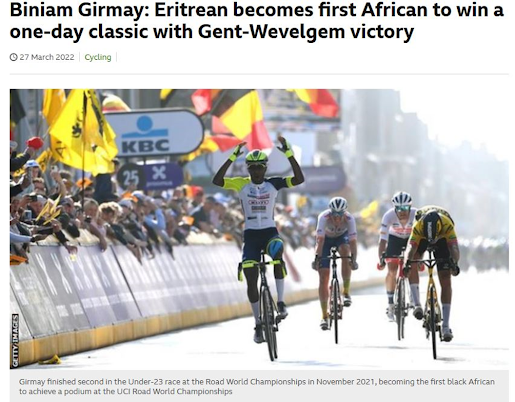 What is significant about this is not just that he is black but that he comes from a cycling-mad country. Eritrea may seem an unlikely source of professional road racers but not so: the country has many problems outside of cycling, but has a rich cycling history though few would have known, and the mixed terrain and areas of high altitude make it a mini Columbia.
The link below gives the full story and history of cycling in Eritrea:
http://www.radiosandwell.co.uk/sport/tour-de-france-daniel-teklehaimanot-wears-king-of-the-mountains-jersey
Road cycling by its historic nature has been the preserve of European riders since the first races were held. That started to change post-war, though a few ‘incursions’ did happen previously, when riders from more remote European nations or ones not noted for producing top riders plus an antipodean influx started to make their presence felt. That was followed by American riders and almost the whole world managed to appear at one stage or another, yet still no black riders and the few who made it over here did not make a mark in the sport.
Is it about to change? Some sports for a variety of reasons have not succumbed to the large numbers of black athletes who have literally taken over many sports as a way to escape poverty, and up to now cycling has been one of them. Of course the attraction of the money in say football is a reason to take that route, and reality says that is the obvious way, as making money in cycling is extremely hard and for the few not the many, as in football.
The similarity between Eritrea and Columbia may well be the difference. Both are cycling-mad countries and Columbian riders have shown the way. Will Eritrea follow suit? It seems that it could. Will other African nations follow up? Not so sure about that; a few maybe, but nothing obvious at this time.
The Winds of Change are indeed sweeping through sport, or the women's versions of sport, something I thought I would never see: the totally gutless politically correct British Cycling are allowing a man to compete in women’s events. The argument over trans rights in sport should never have got off the ground; the fear as I said before is that while so far the trans people who are racing as women have not been very good - hence the switch - inevitably you will get better men who decide winning is easier in the women’s versions and make the switch and this one is a small step up in quality. I have no idea what is going to happen but women competitors are going to have to make a stand by refusing to compete with people like this.
As before the switch is only one way: men to women; that says it all about the mind set of these charlatans. Suddenly sport is being infiltrated by trans competitors; where have they all come from? In time there will be events that women, real women, will simply not be able to compete in any more on a level playing field. It is a farce being foisted on women's sport by gutless governing bodies using selective science to make changes they will surely regret. Who the hell apart from voyeurs wants to watch pretend women competing like this?
What is going on in the western world with this being seen as progress and politicians pushing the agenda, frightened in case they upset a minority by speaking and acting on the truth, that they are not women:
https://www.bbc.co.uk/sport/cycling/60911823
https://www.newstatesman.com/comment/2022/03/theres-got-to-be-a-better-way-to-include-transgender-women-in-sport
And Sharron Davies' almost lone crusade on the matter:
https://www.dailymail.co.uk/news/article-10667459/Sharron-Davies-likens-trans-athletes-drug-cheats-Emily-Bridges-prepares-race-Laura-Kenny.html
So this week we have good news in the sport, and very bad news. It is time for competitors in all sports to speak out or boycott these events, or for those same sporting bodies to set up a separate class for trans athletes - why that is considered a problem is strange as every other type of competitor by sex, by weight and endless para classifications already exist, so add trans categories.
As I finish this piece news arrives that the UCI, cycling's international governing body, have overruled British Cycling and stopped ‘Emily’ competing, but here is this from the BBC website -
https://www.bbc.co.uk/sport/cycling/60934099
- does not exactly give the impression this is all over. BC'smealy mouthed response and the fact that the UCI's own rule book on all this is open to interpretation almost certainly means the trans activists and human rights hand-wringers are gearing up for intervention; plus further delving into the UCI statement does give the impression this is just a temporary injunction, which frankly is not good enough by any standard
The UCI along with all the other sporting bodies, and for once Lord Coe has put his head above the parapet and said the right thing, have to make a unified stand and sort this freak show expanding, for that is what it will become if nothing is done, for good. Get on with it and stop all this self-loathing.