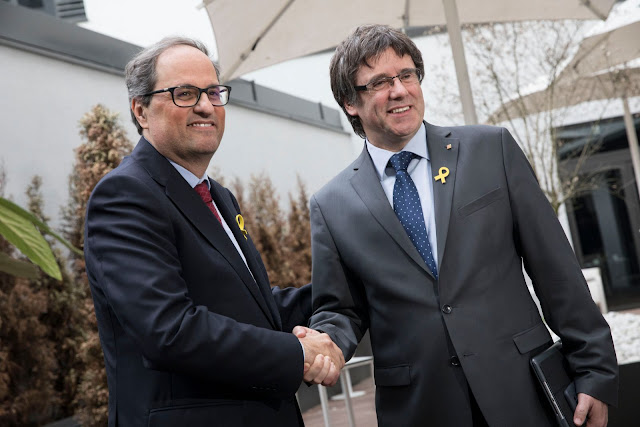 
I see the Catalans have finally elected a new regional president but this one is another lunatic. Quim Torra he is called. That is a wonderful name :) He sounds like a Catalan Supremacist. He described Spanish speakers as "The Castilian speaker, according to Torra: "Beast, hyena, viper, scavenger ..."  http://www.elmundo.es/cataluna/2018/05/15/5af9e6a246163fc7138b456e.html

His sole mission in life is the creation of an independent Cataluña by fair mean or foul; that second method being the preferred method. That should win him lots of new friends! The smallest party, CUP who are anarchists and have four seats in parliament, didn't vote for him because he is not radical enough. So it looks like the petulance will continue. And we think our politicians are stupid!!!

The archives of Barcelona’s Autonomous University hold a booklet signed by Nosaltres Sols! that was published around 1980, according to historian Enric Ucelay-Da Cal. It contains eight pages of typewritten text written in the Catalan language, and titled “The scientific basis of racism”. The authors reach the following conclusion: “For the above reasons, we consider that the Catalan racial makeup is more purely white than the Spanish one, and hence that Catalans are racially superior to Spaniards.”
https://elpais.com/elpais/2018/05/15/inenglish/1526373293_276622.html

And I found this from 1931-
http://www.filosofia.org/hem/193/var/931nsols.htm
It does not state explicitly the racial superiority of catalans but there is no doubting their mindset.

This will not end well. The Catalans are determined to restart the Civil War. Their stupidity is breathtaking. And it has spread to the Balearic islands. Mallorca is seeing an exodus of doctors and nurses because of new regulations requiring proficiency in the Catalan 'language' Earlier this year Ibiza lost its last remaining paediatrician. And, as if to demonstrate how insane this has now become, the members of the Orchestra of the Baleares must speak Catalan. The music director is Japanese and speaks English in rehearsals. The assistant director is Spanish and speaks Spanish when he is in charge.
https://slippedisc.com/2018/04/you-can-join-our-orchestra-if-you-speak-catalan/

John Lennon was right 50 years ago - our government, every government, is run by insane people for insane purposes!

They must have a President before 22nd May and Torra is their third choice. The tidal surge behind it? I wish I knew but their belief in 'racial supremacy' has to be a factor plus the usual vanity and egomania of politicians. Sackerson asked - "How much social disruption is caused by posh people's boredom?" http://theylaughedatnoah.blogspot.co.uk/2008/08/posh-tarts.html
Maybe not so much these days, more like political vanity and egomania as I say above.

And then there is the 'cause' which is invariably imaginary. In the 1931 document they were comparing themselves to Ghandi and De Valera struggling for their countries. There was a definite logic to those two but Cataluña has never been a country. In fact a lot of things I have read will pretend that Aragon is really just another name for Western Cataluña as if Aragon were subject to Catalan rule when it has always been the other way round.

By the way, Craig Murray and Julian Assange are strong supporters of Catalan independence. They obviously haven't done any research on the history and even less by way of thinking about it. Which, to me anyway, calls into question their accuracy and/or motives for their other 'causes' (I also think Murray and Assange fit into Sackerson's "posh people's boredom" category but with added sanctimonious righteousness.)

I conclude with a reference to Tabarnia. Here is the BBC's version of the story -
http://www.bbc.co.uk/news/blogs-trending-42777496

The provinces of Tarragona and Barcelona (Tabarnia) voted to remain part of Spain and the other two provinces, Lerida and Gerona voted for independence. Albert Boadella, who is a comic actor, has appointed himself as President of Tabarnia and the campaign for Tabarnia to remain part of Spain is based word for word on the Catalan campaign to leave Spain, only the words Spain and Catalonia have been switched.

And here is Belgian television's report on Tabarnia's desire for independence-
https://www.youtube.com/watch?v=wAE5z2Di-bw

I see from YouTube that Torra is already the subject of a lot of humour plus one studio interviewee, Joaquin Leguina, describing him as an imbecile
https://www.youtube.com/watch?v=g8tFZfjuW0A

It will be a long road back to normality :)