Nature the Great Leveller, by Wiggiatlarge

Having worked in horticulture in various capacities including running my own garden design and build company one does over the years learn to respect nature and its vagaries.

Gardening and agriculture are both involved in working with and against nature to achieve the result we want, whether it be crops to put food on the table or a garden to enjoy and hopefully relax in.

It is rare for two years to be alike and the different types of weather dictate growth, the timing of crops and flora and the crop output in the food section. All the weather throws at us can be mitigated to a degree in the form of plant protection and fertilizers that can boost a poor year in the sunshine department as examples, but never totally.

This year has been a bit different: the early heat, the heavy following rain, the humidity and a repeat of all three have provided - especially the humidity - a perfect breeding ground for pests and fungus. It has been the worst year I can remember.

I have lost three mature eight-foot shrubs. Two I originally thought to be die-back from the incessant wind - we have also had dessicated leaves and causing early tree leaf drop - but inspection proved it to be a disease that killed the two to the ground. 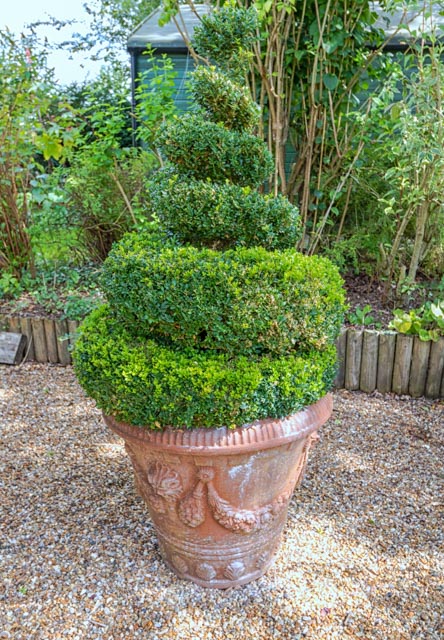 The third was Verticillium Wilt, a spore fungus that waits underground until conditions are right and enters the shrub/plant through the root system and cuts down the uptake of water in the stems. You can cut back and hope new growth will come back untainted but that is a bit of a long shot so the only way is to remove the shrub and burn the infected plant; this will not rid the ground of the spores so you have to plant something that is not affected by it. The plant/shrub I lost was a rare species, Cotinus, American smokebush, that had reached a stage when it was glorious in colour, both during the year and in the autumn. 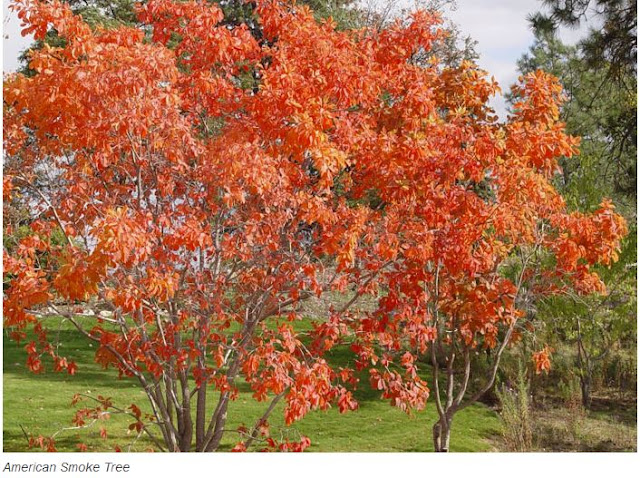 Mid season saw not a new pest but an ever more prevalent one: Lily beetle. I grew a lot of Lilies in the past but their susceptibility to fungus disease made me reluctantly give up the unequal struggle; but recent years saw me return to growing them as the price has fallen dramatically from those early days and the culture growth used to raise these bulbs now means they are a lot ‘cleaner’ than before and you can expect a reasonable innings out of them.

Yet along comes the Lily beetle in an attempt to make me give up again. The bright red beetle comes from underground and lays its eggs under the leaf. They hatch in an amazingly short time and then cover themselves with their own shit, to put it bluntly, to make themselves unpalatable to birds !
Unchecked, they can strip a lily plant in a couple of days, but if spotted you can creep up on the red buggers before they go upside down and fall to earth as their defence mechanism dictates and take great delight in putting your boot on them; but they do return and it is easy to miss the emerging young, so spray is the order of the day and spray and spray……

Having repelled the red buggers all was serene in the garden until a couple of days ago. I noticed what I thought was simply a bit of die back on my topiary box, but on checking a couple of days later I soon saw it was the dreaded box blight. I have dealt with box blight over the years and it has a mixed result on the box. Some are only mildly disfigured and recover. No box is actually killed by the disease, but many really don’t respond and many are not worth the effort in saving; it is a mixed bag.

Where it has the most damaging affect is with topiary, as topiary is a manicured plant cut to a shape, having a large dead hole in the middle of that plant rather destroys the whole purpose of topiary, so there is in those case little choice other than to burn on the now very busy garden bonfire.

Inspecting all my topiary revealed that only two large variegated cones so far have escaped the blight and I have moved them in their pots as far away from the infected ones, probably too late but time will tell. For me it is not the expense of these plants: the two spirals shown here would cost north of £500 each from a specialist nursery and my two large variegated cones are almost impossible to find never mind the cost, but it is the fact I grew these from basic plants myself from scratch. The two spirals have taken around twenty years to reach their current size, and to see that destroyed almost overnight leaves me using a lot of bad language to no avail. 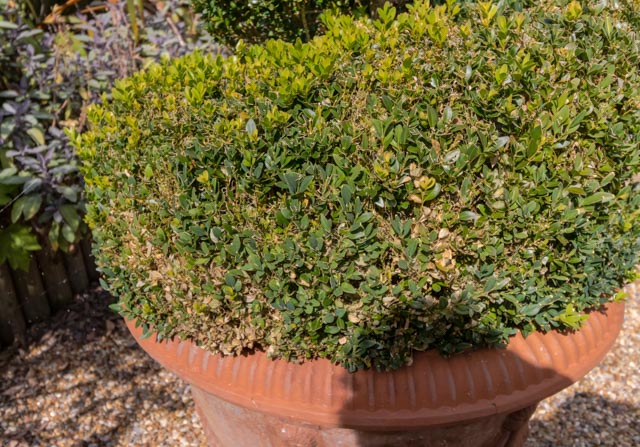 But that is nature. The strange thing re the box is that there is another pest spreading across the country for which there is no antidote: a moth that lays eggs and the caterpillars emerge and destroy the plant almost overnight. It has spread from its native Japan where it does have a predator, a hornet, but it has no adversaries outside of Japan so far. So box is in danger already of virtually disappearing from gardens after centuries of cultivation. The biggest box nursery in the UK has admitted that box is in a perilous position. They themselves have launched an all-out attempt to stop the caterpillar - after all, it is their livelihood - by constantly spraying using substances that are not available to the public and inspecting thousands of plants and removing by hand anything they find and killing it.

But spraying eight times a year and the rest is not viable in the domestic garden so who is going to buy box as and when the word gets out? So box is likely to go the way of the Elm until resistant cultivars are discovered or bred, never a quick process. What with Ash trees disappearing fast and Oak under threat there could be a large change in the landscape soon; though in many cases these diseases peter out or are confined, there have been many examples of recovery or resistance in nature such as the recent Chestnut scare and the London Plane trees some years back, both have stopped being infected.


So all in all not a good year in the garden and a lot of work, as that which thrived has grown like the proverbial and an extra hedge cut is called for. You really, really can never win with nature if it decides to fight back.

I have a fair bit of Box as a hedge. Right now it is OK but I am keeping an eye on it. My pal a few miles away has the caterpillars.

My Hazelnuts are looking a bit thin, they have dropped a lot of leaves during the dry spells.

My Aubergines are doing well, but the tomatoes have been burnt a bit. The cherry toms are in full flood but the other more standard ones are small, and late. Runner beans are coming, and the squash look to be good for the Winter. The chilli pepper plants are fruitful.

We lost two native paw-paw trees that we planted 16 years ago, due to all of the rain that we had had. It's like losing an old friend.

Update, on closer inspection the two spirals as in the photographs have the box caterpillar, one other box ball also, the others have the box blight, so as there is no point as I described keeping topiary that is almost impossible to treat they have been cut down and put on the bonfire, twenty years plus to grow, 30 minutes to destroy before the caterpillar does, their rate of destruction is unbelievable, sad but inevitable.