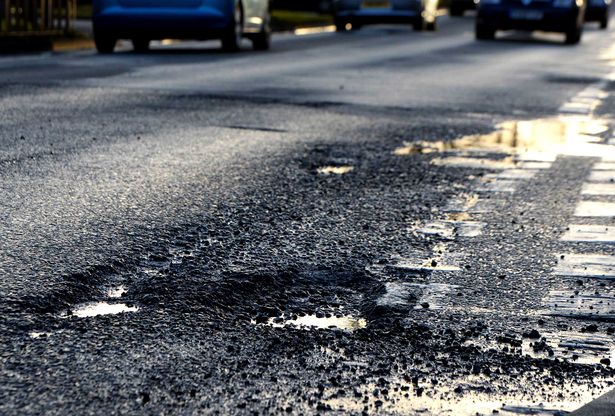 Potholes are a popular item for discussion around this time of the year: the first hard frosts and persistent rain bring about an explosion of these obstacles on our roads with a regularity that is now an acceptable fact of life.

A twenty mile journey on a local A road that I had to make in pretty awful conditions highlighted the true state of potholes in this area and I suspect everywhere else. Constant neglect of our road system and the temporary repair ideology that all councils adopt in the name of cut backs has left the road I traveled on looking in large parts like a cross between the Nairobi – Mombasa highway - anyone who has traveled on that will know what I mean - and no-man's-land in the Somme. The endlessly refilled potholes had as one succumbed to the cold and wet and scattered their collective innards all over the highway leaving an assortment of craters to be avoided.

This annual farce forced upon the populace by hand-wringing local government officials as an inevitable consequence  of “cuts” is, as has been pointed out by those who really know about such things, nothing more than money down the drain, as the temporary repairs last for ever shorter spans. We have one at a small road junction nearby that has been filled three times this year alone, showing the cost of the short-sighted approach to this and all the other infrastructure defects in this country.

A good resurfacing will last without further maintenance for a predictable time if the work has been properly carried out, and so the costs can be reliably approximated. Continually employing people to fill ever more potholes is a waste of taxpayers' money as eventually the road will have to be resurfaced at greater cost than originally due to excess damage, and the refilling money has to be added to that.

Anybody coming back from a continental trip can see the disparity between our road infrastructure and that abroad and the gap in the quality is growing apace, year by year .

I suspect the government is fully aware of the problem but successive governments  have failed to do anything meaningful about it and now the cost has reached a prohibitive level, such is the problem unless toll roads are introduced (and they are not coming anytime soon, but will come as necessity demands.)  No political party wants to be “unpopular”-  which is rather funny considering none of them are popular - and they will kick the can down the road as long as possible, until perhaps another party has to deal with it as they do with everything else.

In Africa you get enterprising men who stand by the badly potholed roads with a large pile of gravel, and if you give them a small amount of cash they will fill a few holes; perhaps a cottage industry on those lines could be started up here !

If the trend in neglect continues will we all have to fit monster truck tyres to our family cars in order to navigate the ever increasing number and size of these craters? Will the I-Spy books make a come back with "I-Spy the biggest pothole"? Will they become part of our national heritage and demand national treasure status, perhaps even an AA * star grading? All is possible, for certainly they are not going away.

Email ThisBlogThis!Share to TwitterShare to FacebookShare to Pinterest
Labels: Wiggia

"Anybody coming back from a continental trip can see the disparity between our road infrastructure and that abroad and the gap in the quality is growing apace, year by year"

It would seem Sackers that the Delorean family are still trying for the flying car............

Try here in Ohio. There are many potholes, and people have actually been fined for filling them in.