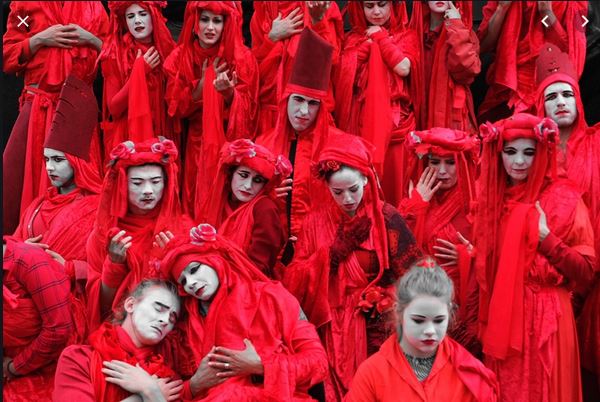 At this moment in time it seems that every Brexit report, ad nauseam, is matched by another launch of "save the world for the children" or alternatively another green measure, some think tank backed by government (our) money has come up with to further ensure more penury for the little people in the not too distant future, usually following some new report of a climate model that spells out doom for all, yet no climate model has been correct on anything.

Naturally all these schemes come with the approval badge from those who either gain from it financially or find comfort in doing the ‘right’ thing regardless of consequences they will never have to endure.

I notice that any ‘good’ news on the sustainable front is given priority in the news. A report that for the first time sustainable energy provided more than 50% of the total needs omitted to tell that the quarter they were referring to was the three months of a very hot summer and the longest days when demand was at its lowest; of course when those still overcast drab and very cold winter days come come along and the sustainables only provide zilch there is no headline, only the threat of power cuts, which neatly brings me to the next nonsense in the eco world.

The 2050 target for zero emissions cannot possibly be reached with our current infrastructure. The National Grid report here talks of the need for 85 gigawatts needed by 2050 as against 60 now. In the light that they can’t get a single new nuclear plant built in twenty years, that can never be achieved with a combination of running down coal-fired power stations and replacing them with the weather-reliant wind and solar systems. And none of the figures show any allowance for the expanding (forever) population: official figures say that the next ten years will bring in 3 million extra, enough for another 3 Birminghams alone, never mind the endless illegal migrants that are reckoned to be anything from 1 to 10 million according to which report you want to believe.

These are basic facts. Silly claims that smart meters will make an eight gigabyte saving are pie in the sky: there is no proof for that assumption and it is just another push to get control of your energy so they can decide what you get and what you pay, never believe anything else on that front. Smart meters give the power companies the ability to decide what you can have at a given time and ramp up the price during peak periods, like the motor car in whatever form that takes it will be priced to dampen demand and use, they will have no choice because of the lack of the right type of infrastructure.

This quote from a government minister on smart meters….

‘Eventually, residents would be able to choose real-time tariffs, to switch on appliances when energy is cheapest' - i.e. you can use your kettle and save money if you put it on at 1 o'clock in the morning, plus he gives a veiled threat to those who have not complied and sought to have smart meters fitted…..

‘Lord Duncan admitted there had been "hiccups along the road", but there were potentially "big incentives" for people to agree to a smart meter being fitted. He added that those who stuck with "relic meters" risked "very high" maintenance costs.’ There are so far no advantages in smart meters for the consumer,  all the advantages are for the supplier and the veiled threat is just that. What high maintenance costs? Or are they going to charge us an exorbitant rate for meter reading as you have failed to toe the government line?

Still we will all be able to travel by train when we are priced off the road….

The contrasting views on future needs were highlighted in a Times business report on the aviation industry, in which it was stated that world-wide the number of aircraft expected to be in operation by 2050 will have doubled to around 44,000 - interesting in the light of what we are told re travelling by air, could it be just us being stopped from flying as it appears no one else will be ! And certainly not those celebs who happily pose with the likes of XR (Extinction Rebellion) protestors to boost their green credentials while at the same time totally ignoring the same advice regards themselves. (The Guardian forecasts 48,000!)

Naturally the population explosion world-wide is left out of any energy plans, yet how can that be? Every extra person on the planet will require feeding and will have have an energy requirement. Both needs are now being strangled at source by the green lobby yet they believe this is good for us, the same people who claim we are at fault as a prime industrial nation for the ‘horrors’ of climate change - which we aren’t - also benefited and are where they are in the pecking order because of the industrial revolution started in this country.

An interesting short video on where the population is going from the beginning of man on this earth or at least from when significant numbers had established:

Unless another form of propulsion is advanced as with hydrogen to become practical the EV (electric vehicle) will become the status quo, and I don’t oppose that; but with all the pressure from the green lobby groups and the energy companies who see the long term future and another fuel bonanza it cannot be done. The costings for the infrastructure involved are enormous - one estimate showed around 180 billion for the charging infrastructure - and we already lag far behind many other western nations in that respect.

The retail price of EVs is simply not on. Very little R&R is required to produce ICE (internal combustion engine) cars, yet despite manufacturers' claims of huge investment, electric motors have been around longer than the combustion engine, and still a recent report gave a figure of around £800-900 for an electric motor to power an average EV. Electric motors require no expensive gearbox and very few engine ancillaries, only the battery is expensive and the price there has plummeted as they become main line; so why the ridiculous cost? To which we know the answer: as with all 'new' technology the initial launch period is where manufacturers  make their money, as with e.g. mobile phones and cameras.

No one yet has given a solution to the recycling of the enormous amount of batteries that will start to end their useful life in the near future; not just car batteries but the already surging popularity of cordless, battery-powered tools and appliances. Anyone looking at the battery collection points in supermarkets sees overflowing containers of just the small batteries used in items like phones etc. The thought of car batteries being on that scale makes the mind boggle on that scale and as I've said, apart from mouthings in some quarters no evidence of a solution has appeared.

One of the more interesting and ludicrous aspects of all this Greta Hamburger attack on everyone to 'save the planet' has been people calling out the hypocrisy spouted by resource-wasteful celebs who then back track to the position that although they carry on doing what they do, they have warned the rest of us. A typical statement came from Lewis Hamilton of all people, who will no doubt claim that the ridicule heaped on him is because he is black or at least half black. This is what he said.

"It's not easy as we're travelling the world and our carbon footprint is higher than the average homeowner who lives in one city," said Hamilton. "That doesn't mean you should be afraid to speak out for positive change."

Hamilton used his Instagram feed last week to say he felt "like giving up on everything", that the world was "messed up" and to ask people to follow his example in taking up a plant-based diet to help the environment.”

So in his case eating beans makes his air travel and driving cars that guzzle fuel perfectly OK. "Bizarre" doesn’t cover it. 'Give up on everything' - we shall see, that is one of those statements like, “I will leave the country if we exit the EU”:  it never happens,  and he is far from alone. Most of the XR leaders have been found to be a long way from following their own diktat, but it was forever thus.

It could be that all the above is not worth worrying about anyway, just the demographic part. It might well be the case that those third world countries that are expanding at these alarming rates will simply decant to the west in numbers that are never sustainable and we all go back to third world living, something else there seems to be scant concern about in the minds of those who govern us.

From JD, sums up the science nicely....

-To believe that science is enough is the most naïve of superstitions.
--Nothing proves more the limits of science than the scientist’s opinions about any topic that is not strictly related to his profession.
--Stupidity appropriates with diabolical skill what science invents.
--Being only falsifiable, a scientific thesis is never certain but is merely current.
https://onecosmos.blogspot.com/2019/11/society-for-prevention-of-dunning-kruger.html