CHRISTMAS: All Lit Up, by Wiggia

The annual ritual of decorating the house inside and out has reached a state whereby people start to question ‘has this really got anything to do with Christmas?’ in a religious sense: very little items that started out as symbolic have developed into full-on festive fun ! And if you don’t agree with that, fine, but it is what it is. The likelihood of the years rolling back to a more contemplative time is long gone, rightly or wrongly.

This rather serious preamble is because I have dived into the decorating meme with abandon this year. There are reasons, none good, but the purchase of a new Christmas tree and new lights left me with the old lights plus two older strings with nowhere to put them.

The decorated Christmas tree goes back to Victorian times in its present form so we know who to blame for that item and of course when we were kids hours spent linking and licking paper chains was as near as we got to more colourful decorations.

But things have moved on a pace: my recent visit to the garden centre for the new tree and lights showed by how much.

It is easy (!) to get drawn in to the whole over-the top-decorating thing when presented with such choice. No longer a few tasteful items over the mantelpiece, a wreath on the door and the tree with the presents underneath on Christmas morning; this is no longer anywhere near enough.

The lighting is the most obvious big advancement in decorations. LED lights have put paid to that dusty string produced from under the stairs each year that you then spent several days trying to find the dud bulb that stopped it all working or the loose bulb that made everything flicker and eventually sent you mad and you binned the lot. Today's fail-safe lights mean we now have endless variations all of which are "put up and go."

But the garden centre showed a lot more than strings of lights. We now have laser displays: you can turn the front of your house into a permanently snowing tableau or a moving Father Christmas on a reindeer sledge going endlessly from left to right and giving you a migraine. Giant blow-up Santas and complete scenes of the Nativity filled one corner of the display area, the biggest nine feet high, all lit internally for the pleasure of passing motorists and others, and to top it all you can assemble a crib and have a menagerie of animatronics all moving. There is no longer an end to it or what you can spend - which is the point after all, none of the latter comes cheap. 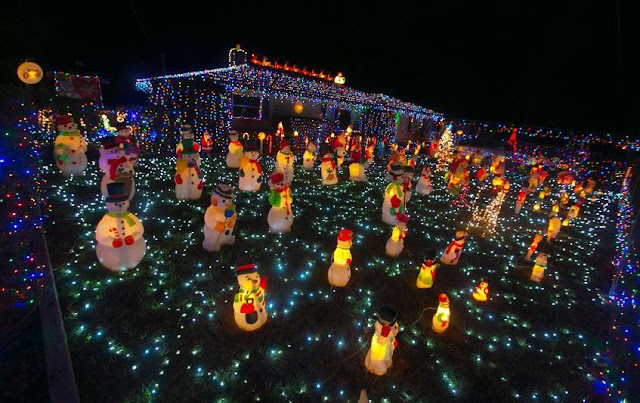 Enough of this doom mongering. What to do with the excess light strings, 2000 bulbs in total? A good question. My solution or proposal was to use the branches of the cedar tree at our entrance that traverse the drive as a support for the lights and after tying in the ends of the branches on the other side of the drive, thereby creating an arch weave, the lights in the branches would create a hopeful appearance, not unlike the entrance to a grotto !

Only one problem to accomplishing this: me. Thirty, even twenty years ago it would not have been a problem, but now... I laid the supply cable, I placed the waterproof connection box at the ready and then unravelled the light strands, put my ladders in place and climbed up to start the process.

An hour later it became evident that getting up between the branches was not on. Approaching from the ground and not the trunk was also fraught, as there was nowhere to place the ladders and secure them. So after another hour I climbed down and gave up, before I had an accident and hung myself and lit up all at the same time.

This didn’t go down too well with No. 1 as the prospect of a grotto had ingrained itself on her mind and my safe alternative to light up the ten-foot-high shrubbery in front of the house (the house is elevated) was met with a distinctly muted response. I got the impression me hanging and lit up would have been the preferred option. Nonetheless less after an hour or so of continual re-jigging the lights' positions it looked half decent and it got a grudging thumbs up. 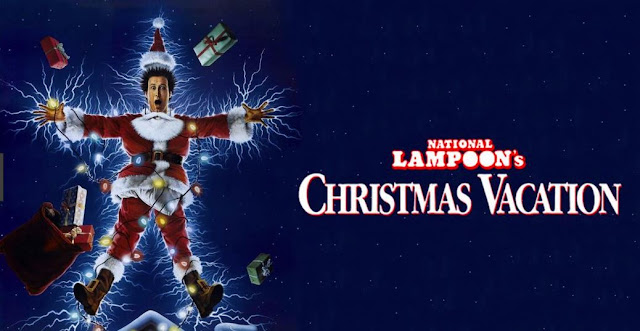 Having made a rather splendid job of decorating the tree No. 1 has started to get critical of neighbouring properties. The stretch we are on does look a bit like a scene from the film "National Lampoon's Christmas Vacation" with me taking on the role of the hapless Clark Griswold (played by Chevy Chase) when he did the initial lighting-up; I fear for the national grid when everyone turns the lights on. 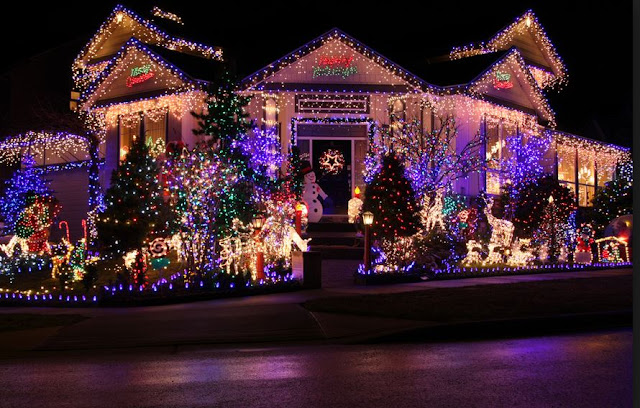 No, it is not that stretch of the road which comes in for  opprobrium, no: it is those with a feeble ten-year-old wreath on the door, or a tatty small tree with the minimum decorations. These, she considers, are not pulling their weight in the scheme of things: “If you are going to decorate, do it properly or don’t bother at all!” I can only nod weakly in agreement; the decoration police have spoken.

As of last night, the occupant of Number 42 has  elevated himself from those that do not bother by putting a large illuminated reindeer in his porch; not so many to go now !

The house itself is only part of the total look. Those who care (*cough*) go the whole way with the table decs which must include centre piece, sprigs of holly by the dining utensils, candles (how could I forget the candles? the bigger the better), crackers, and Christmas-themed serviettes - this year we have penguins! Plus if you still feel festive after all this, a Santa hat or similar to wear during the festivities - a must if children are present or even when they are not.

And before anyone comments, taste has absolutely nothing, nothing at all to do with any of this.

I can hear the cries from the more traditional elements saying this has absolutely nothing to do with what Christmas is all about. Quite right too, but it is not going to be me who broaches that angle with No. 1,  oh no no no... I have no desire to end up like Clark Griswold.