I wrote a piece about the involvement of the Regent Street Polytechnic, now Westminster University, in the 1908 Olympics some years back, but the piece has disappeared and the print version I have somewhere can’t at this moment be unearthed; probably buried with much else when we moved house a few months ago, so I thought it appropriate to re-write it.

The 1908 games were hastily put together by Britain after the original site in Rome for the original 1906 games was considered unviable following the volcanic eruption in Naples and the fact the Italians had more on their plate than worrying about an Olympics. It was also suggested they didn’t have the money to put the games on in the first place and the volcanic eruption was a timely intervention; we, and it wouldn’t be the last time, stepped into the breach.

The Regent Street Polytechnic had a proud record as many of its sports clubs were among the finest in the country. The Polytechnic Harriers produced numerous Olympic medallists over the years and had their own sports ground at Chiswick. Many of the other sports clubs and associations also had individuals and teams competing at the highest level plus the organisational skills to run big events. This made them the obvious choice to turn to in helping put on the 1908 games; politics with the IOC means that very little, in fact nothing on that matter is admitted or recorded by that organisation today and you would be hard pushed to find a mention in any IOC history - there is none - of the help that ensured the games went ahead.

I have a personal interest in all this as I was a member of the Polytechnic Cycling Club, at the time the foremost track club in the country with many national champions in various disciplines. As a club it must have had the most celebrated club house in the country in London’s Regent Street. Though the club had just one small room to call its own it did have the run of all the facilities available there: swimming pool, snooker room, gym and educational facilities should you require them.

On entry as today the marble hall is very imposing and the history of sports success could be seen everywhere: a marble slab with the Polytechnic's own sports person of the year above the grand staircase read like a Who’s Who of sport at the time, and various glass cases in the corridors contained club trophies that outshone anything I had ever seen; one of these became subject to a row over ownership after the Polytechnic ceased to be and all the sports clubs were disbanded then or a little later as it changed to a university in ‘86, so no longer a Polytechnic with a history of success in so many fields, now a dubious change for the better with a uni that is famous only for being a hotbed of lefty thinking and no sports association. 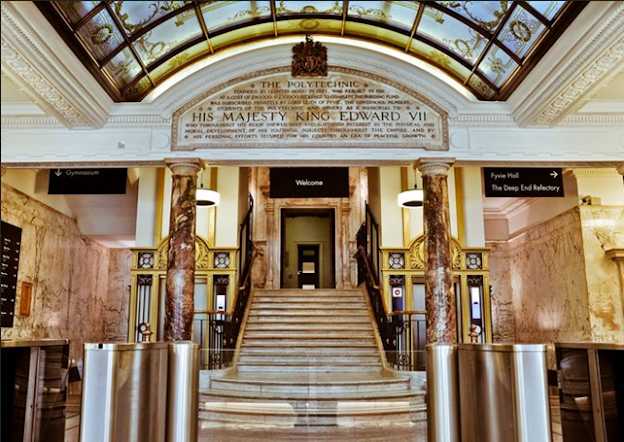 Obviously the security barriers were not there in my time and the annual best sportsman names were inscribed in marble behind the centre welcome above the door, if it is still there.

I must also mention the late Lord Hailsham, Quintin Hogg, who was very much involved in the Poly and would respond in longhand to requests on things like law that would affect members.

This gives a summary of the lead up to those Olympics and the Poly’s involvement:

“The Polytechnic Harriers and the Olympics

In 1908, when the Olympic Games came to the White City Stadium, the opening and closing ceremonies and the Marathon race were all organized by the Regent Street Polytechnic. This institution had been created by the vision of Quintin Hogg (1845-1903), a man who believed in the education of ‘mind, body and spirit’. In 1891 it became the model for applied education across London. Visiting athletes from abroad were invited to become honorary Polytechnic members and to use the sports and social facilities at 309 Regent St.

Edward VII, Queen Alexandra and the President of France visited the White City Stadium on May 26th, three weeks before the Games began. The Polytechnic staged the events, which included a parade of athletes and a gymnastic display. A series of postcards were produced to mark the occasion.

The Polytechnic Harriers Club organized the Trial Olympic Marathon race which was reintroduced as an event in the modern Games. The race was run from Windsor Great Park to the stadium and established the international distance which was fixed by the Games Organising Committee at 26 miles and 385 yards, enabling the runners to finish in front of the Royal Box.

Twenty-three Polytechnic members were selected for the British Olympic team. Charles Bartlett of the Polytechnic Cycling Club won a gold medal, and the Poly won a further four silver and bronze medals in boxing, cycling and track events.”

The Polytechnic Harriers have played a major role in the destiny of world athletics.

The club was entrusted with organising the opening and closing ceremonies for the 1908 Olympic Games at the newly-built White City Stadium in London, which were lauded by the athletes and media alike. Athletes became honorary members of the Polytechnic and, in the absence of an Olympic village, used the organisation’s Regent Street headquarters for training and lodging.

There was also a 'rehearsal' held at Chiswick – as described by The Times – when members of the Poly competed against the athletes in a variety of events.

In the official report on the 1908 games the Polytechnic is thanked by the Council of London for its assistance in so many areas.

Two things emerge from this:

“At the time of its demise in 1996, the Poly was Europe's oldest regular marathon. It had seen more world records and had been run over 42.195 kilometres (26.219 miles) more often than any other marathon.“

It also had a magnificent trophy awarded to it by the Sporting Life and the Poly marathon had a status as the most prestigious marathon in the world after the Olympic version.

The link doesn’t tell the whole story as there was a legal dispute over ownership of the trophy: it had been gifted to the Poly for their race but the Mirror group which owned the Sporting Life refused to return it and the rest is history. What those who claimed it, rightly or wrongly would have done with it is doubtful as the club no longer had a race or a winner to present it to.

Images for some reason of the trophy have completely disappeared, but in this Movietone clip of the race won by the great Ron Hill the trophy can be clearly seen.

The marathon was not without controversy. Pietri Dorando was the first man into the stadium but was suffering from extreme fatigue and did not look as though he would make the line and so was helped, and then disqualified. Such was the public sympathy for Dorando that the Queen awarded him a gold cup the next day as a consolation prize. In this old postcard of the event Dorando can be seen running through Harlesden, accompanied, as were all the runners, by a cyclist supplied by - you guessed it - the Polytechnic Harriers and cycling club. 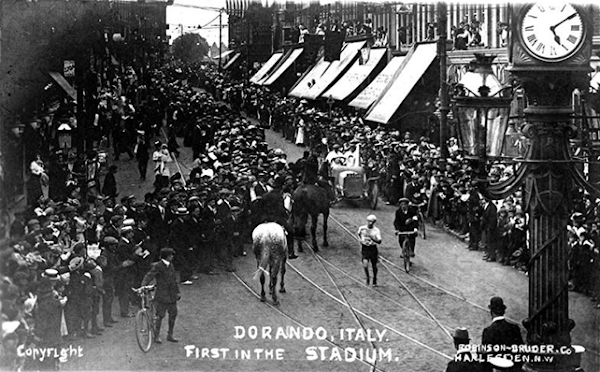 Back to the Olympics. Having stepped in to save the Games we only had two years to prepare for the event. The challenge of preparing London for the 1908 Games with such little notice was taken up by Lord Desborough (1855-1945), chairman of the British Olympic Association. This formidable aristocrat had climbed the Matterhorn, rowed in the Boat Race for Oxford and swum across the base of Niagara Falls, so organizing the Olympic Games was not an especially intimidating prospect. He persuaded the organizers of the Franco-British Exhibition of 1908 to build the stadium, at their own expense, to accommodate an athletics ground. In return they would receive a proportion of gate receipts. Soon named ‘White City’ after its ugly concrete structures, the stadium was completed in ten months by George Wimpey and included a swimming pool and cycle track as well as facilities for track and field athletics. It was designed to accommodate 66,000 spectators but could hold as many as 130,000 standing on terraces.

It is difficult to imagine such an undertaking being completed in that time today; oh, and it made a small profit !

For the only time the British team won the most medals, 146 including 56 gold medals. The White City stadium survived, later mainly as the home of greyhound racing, until it was demolished in 1986 to be replaced by a 'white elephant', the BBC television centre, itself now gone.

The velodrome/cycle track was never really used after the 1908 games and further grandstanding was built on it to increase capacity.

The games had one other first: women were allowed to compete in a small number of sports for the first time.

The games suffered from appalling weather and were extended to finish all the events: they actually lasted for six months. This photo of the track cycling gives an idea of the weather; for safety reasons, track cycling is never held in the rain, but the program got so behind they changed the rules. 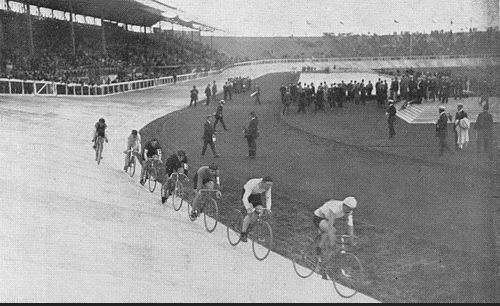