WEEKENDER: The poor quality of our representatives, by Wiggia 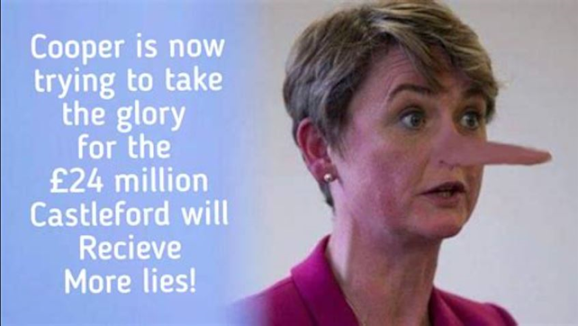 Yvette Cooper - I always thought with that name she was a cross between a cheap Vauxhall and a Mini Cooper - was reliably typical as she implored the government to include everyone in Afghanistan who want to come here to be allowed to, as she has on every other occasion there has trouble in the Middle East and elsewhere. She did this with her best impression of a wronged-woman-face on. This comes after a day of word soup from our? representatives who would welcome anyone without checks into this country. This has been one of the worst displays of faux concern from a bunch of people that in the main are not fit to run a bath.
https://parliamentlive.tv/event/index/392a628b-beda-4bc1-91df-584f2a1cdf90?in=12%3A43%3A55
(embed not available)

Why it is thought necessary to have a full day of these endless speeches, most of which as I said just repeat endlessly on the virtue theme, is a mystery. Is it a type of mutual- and self-flagellation - 'we were all so wrong but that lot were more wrong' or is it the case that if they all gather and repeat the same thing they somehow believe that the outside world will see them in a different light? The irony is that hardly anyone watches these parliamentary debates, so in reality they are virtue-signalling to themselves.

Up to our ears in debt, policies on almost everything that will impoverish the nation further, a health service no longer fit for purpose, laws being put in place at the bequest of minority woke lunatics, minorities of all colours being given preference on all things ahead of the indigenous tax paying population, law and order collapsing among the untouchable minorities etc etc, yet they spend a day scoring political points in an attempt to appear virtuous.

The only certainty from their day in the spotlight is the guarantee we will add untold thousands to the welfare bill and they will be fighting for hotel rooms with the dinghy people. When you add the dependants that will follow and the others who will follow the dinghy route, we will be filling small? towns up or the equivalent on a monthly basis. Yvette of course is well known for her generosity in taking in refugees (sarc) so we shouldn’t feel we are not all in this together the next time one of these children with beards goes on the rampage and kills or rapes someone; after all, 'lessons have been learned.'

The paucity of our representatives was today put on display for the nation. There was never a better example of why we should not vote for the vast majority of them and the bankrupt parties they all represent. The future for us? There isn't one any of us would want coming out of that place.

In the USA Joe Biden has surfaced to put on one of the most appalling displays of defence over a totally failed exit strategy in Afghanistan, blaming all and sundry for his obvious errors; and then twenty-four hours later, or five days according to Joe, he doubles down on the same strategy and again blames everything and everyone else.

Boris has put himself in a hard place as from the start he has brown-nosed Biden and followed the 'net zero', 'build back better', 'Great Reset' line, which now looks discredited, it always was, and as with the rest of European leaders he has been ignored. No good talking of being disappointed in the leadership of the USA in this one when you have failed to speak out about other obvious inadequacies that have emanated from the White House ever since Biden took charge. Bojo’s address to the house was as bad as all that which followed.

Today we have had two of our own talking total b*****. Firstly our defence minister Ben Wallace almost repeating word for word what Biden said: if nothing else you would have thought that seeing the hammering Biden was justly getting he might just have revised his interpretation for his own sake, but no he also seems to think that what happened had nothing to do with any strategy, if there was one, and everything to do with the Taliban moving to fast, so in fact it was the Taliban's fault all along.
One got the impression from this he was fishing for the feeling-sorry-for-him vote, such was the humble ‘we could do nothing’ stance throughout.

And then we had our Chief of Defence Staff Sir Nick Carter coming out with all sorts of woke platitudes in this interview including what I hope will be for him forever remembered as his words, “the Taliban are just country boys” - all that was going on outside the perimeter fence was just joshing, was it?

Obviously the reports of the chopping off of hands in the provinces and the killings outside the airport perimeter fence had passed him by, such is the state of our intelligence, and he has never read or heard anything contrary to his woke bumbling, such as this from a woman in Afghanistan in 1999:

"Living under the rule of the Taliban regime is like being in an abusive relationship. At first it's good. They make lots of promises, they watch their steps, they even deliver on some of their promises. But while you are being lulled into a false sense of security, they are making their plans.”

Or the reports that the Taliban are now starting to look for collaborators.

And this man is Chief of Defence, God help us.

Meanwhile the deputy leader of the Greens, one Amelia Womack, behind 'five homes' Caroline Lucas

- made an appearance on Talk Radio where she managed to maintain a smug 'I know better' face for the entire duration of the interview; nyone who has seen Lucas interviewed will have observed the same trait, it’s a Green thing:

See from 2.03 in; she manages to make everything a party political broad cast without ever answering the obvious questions and elephants in the room; they never do.

She is another who has never had a proper job and despite her prominence in the Green party only managed 2.1% of the vote when she stood in the general election last time, hardly a mandate to pontificate to the rest of us how we should live or the direction the planet should be heading in, yet again as with all minorities however small they get more of a say than the majority who really don’t want to be told they will have to pay much more for less, by someone who, I repeat, has never worked in the true sense.

These are just some of those in the spotlight at the moment in the UK and the USA. it has often been said that it takes a crisis to show what leaders are made of; there can be no doubt the current crisis shows we have no one of any value in the top jobs, a vacuum of talent and common sense prevails.

As a bit of light relief: the Daily Mail is on the story about the Australia v Afghanistan test match to be held in November that is ‘likely’ to be cancelled, as good a prophecy as any I suspect. At moments like this it is good to know the press have their finger on the pulse.

What I find highly amusing is that the people who are virtue signalling that 'We must save the Afghans from the Taliban' do not seem to realise that they are explicitly stating that Islam is a fundamentally violent misogynistic religion, a point of view if expressed about the fanatical Muslims in the West today would get you arrested.

Arguably, Democracy may be the worst method for picking competent leaders (channeling a little Churchill). We elect by looks and sound bites.