Infrastructure, a dirty word ? by Wiggiaatlarge 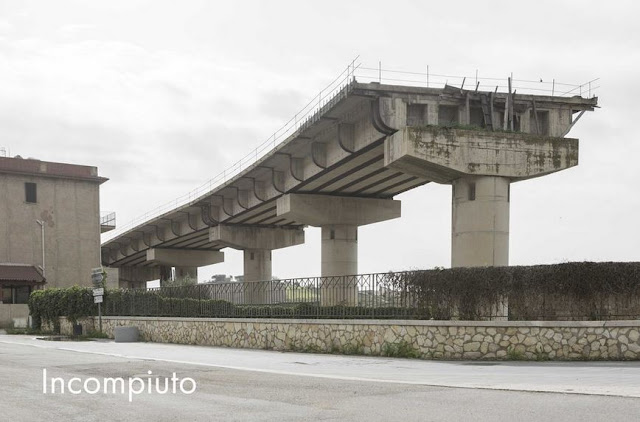 If there is one thing above all others where we have fallen badly behind our European neighbours it is in the world of infrastructure: hugely expensive, always over budget and always years late, not just in the building but in the whole planning and execution phase.

I could pick any sector. Schools, hospitals, transport, airports etc etc all are dated in short supply and/or in poor condition. It seems to have been like that for decades now and it has been. For the purposes of a small local illustration of the absurdity of the way things are "run" and planned and executed, I will tell the tale of a road to nowhere just up from me here in Norwich.

Norfolk in general is not exactly blessed with road connections. It has no motorways. It does have some A roads, the worst example being the A47 the main east to west route that still has many miles of single lane sections causing horrendous jams and stationary traffic on a daily basis during any daylight hours. We live in west Norwich and it takes over two hours to reach the A1, the nearest motorway to the north, and if you go south the newly dualled A11 (it only took thirty years to get that bit done) takes you slowly south to link up eventually with the M11, and that is it: everything else is single lane and very slow and very crowded.

Back to the road north of here. For years - it is always years - there has been a need for a northern by-pass to the City of Norwich to link at each end with the A47 and create a ring road for the city.
This was finally built and opened 18 months ago to much joy, despite certain cheap short cuts in its build which rather took the shine off it. But the real farce with this road is that it stops short on the western end of joining with the A47. How could this be? I thought only the Italians with Mafia help built roads that just, well ended, but no, we have one.

There has never been a decent explanation to this ‘short’ coming. Reading between the lines, it's likely the Norfolk Council and Highways England who are responsible for the atrocious A47 could come up with money for their bit and the project went ahead on the understanding that, well, ‘one day...’

There was needless to say a fairly large riposte to this nonsense as the road's stopping short created other problems, shovellling traffic at the short end into small rat runs through the surrounding villages. Norwich has a river network that bisects the city and this creates problems through lack of decent crossings, most are small and old. The two bridges near us for example both have 7.5 tonnes weight limits but that doesn't stop 44-tonners using the bridges and creating mayhem in the small villages and tight roads and corners that can hardly contain them. As usual in these circumstances the police are less than useless in stopping these lorries and fail totally to stop the excessive speeding in the same roads, a tale retold in many places in this country.

Back to the road to nowhere: after the obvious and pointedly ridiculous foreshortened route the council embarked on a local study as to how best to complete the route. Total nonsense of course because it has been discussed over and over for years; if they don’t know how to finish the road I would suggest they all resign and do something else for a living.

Yet on they have ploughed with a “consultation” document, meetings with proposals and diagrams for alternative routes have been held in all the affected areas and emails and letters sent at great expense to people who live in these areas. This process in itself - unsurprisingly, if you are a cynic like me - managed to eat up 18 months of time since the road stopped short, almost certainly stalling in the hope of funding coming forward which is not there at the moment.

Finally the survey is completed and analysed and a final route chosen. Naturally it is not the one that 90% of those asked plumped for which begs the question why ask? but in their consideration a route further west was chosen and the reasons given. What they don’t say is that by pushing the joining up further west the inclination is for many to not bother and take the rat run instead because it is shorter. Well done Norwich City Council, they really should not be allowed to plan anything.

And all this comes with a caveat of the funding being made available. You really couldn’t make it up.

Meanwhile at the top of our road the council has just spent £5.4 million making a dual carriageway. This involved one extra lane and some re-jigging of the less than a half mile stretch. Apart from the money being wasted - and they cry austerity at every juncture - it achieves absolutely nothing as it ends at the same set of lights and the road from then on into the city is mainly single carriageway and where it is dual it has a bus lane. Well done again Norwich City council: £5.4 million that could have gone towards the road to nowhere used for a useless road widening. We get what we vote for but sometimes I think whoever we voted for would come from the same gene pool of the current incumbents of city hall, a building that itself despite having millions spent refurbishing on it still looks like Ceaușescu’s palace.

Every time I go abroad now the difference in things like road infrastructure, railways, airports and more becomes ever more evident. In a crowded isle it is never as easy to make the building of major projects yet we seem to be shackled by planning, shackled by lack of vision, and shackled with the lack of desire to make the citizen's life easier.

Because so much is is in a parlous state through long term neglect we ended up with the unbelievably costly PFI projects for items like hospitals; these by their nature are a business man's dream and a taxpayer's nightmare at the time. PFI was an easy method to get past legislators as any government could with the right projection be seen to be actually doing something; only later did the cost raise its ugly head and while the increase in PFI projects has slowed they are still being pushed and passed in some areas. As with all such, other people's money is easy to spend whether short term or long term.

All that is wrong is exacerbated by an increasing population. All the increase comes in from abroad , from the EU and from the third world, all have access to our crumbling infrastructure and all by sheer numbers contribute to its further decline.

Is there a light on the horizon? No, not if a Prime Minister can sign away a trillion on a climate change project that will do nothing to change things; despite the hand-wringers who say we should do “something” that does not make it all right to squander huge sums that further impoverish a once powerful proud nation while disregarding the real needs of the people.

As a really powerful storm showed last night, if the climate is changing and it always has, we - homo sapiens - are in just a very small window of the evolution of the Earth. It will do as it has always done: change. If we are adding to it there is one problem that will not be solved by throwing money at it: the population explosion wipes out any gains made every minute of every day, so how about spending what we have on things that don’t impoverish the nation, just for once spend it on something that makes a difference to everyday lives and boosts trade at the same time: infrastructure!

Let's see what the Boris bounce does then. Not holding my breath.

In most of the US, they talk about infrastructure, then wait until people die.

There are a couple of bright exceptions, including the water system for New York City.

However, in the Republican-controlled states, tax cuts have priority over bridges.

"if the climate is changing and it always has, we - homo sapiens - are in just a very small window of the evolution of the Earth. It will do as it has always done: change. If we are adding to it there is one problem that will not be solved by throwing money at it: the population explosion wipes out any gains made every minute of every day, so how about spending what we have on things that don’t impoverish the nation, just for once spend it on something that makes a difference to everyday lives and boosts trade at the same time: infrastructure!"

We are nearer to the next 'ice age' that we are to the previous one.

@CherryPie - "We are nearer to the next 'ice age' that we are to the previous one."

@Paddington Warming and cooling of the earth is cyclical (although not evenly spaced). I saw a really good graph in a book that I picked up at the Natural History museum. The book accompanied there exhibition that showcased a baby woolly mammoth.

We are currently experiencing an interglacial period.