WEEKENDER: Are you queer? by Wiggia

Amazingly a word that was outlawed not that many years ago by the  LGBTXXXXX brigade a few years back is back in favour. At this rate 'faggot' and 'poofta' will be acceptable soon. such is the rate of change.

In real terms I don’t give a stuff what people get up to in their own homes. Why should I be concerned after all these years when no one ever complained about selfgendering and pronouns? I doubt the majority if confronted over the pronoun issue would have a clue what was being spoken about and that is how it should have remained.

Which all makes this announcement from ARUP  and the Westminster University aka the old Regent Street Polytechnic and now sadly a woke outpost, even more ridiculous.

The Regent Street Polytechnic was a grand old Victorian philanthropic organisation set up in 1837. Its mantra was:

“an institution where the Public, at little expense, may acquire practical knowledge of the various arts and branches of science connected with manufacturers, mining operations and rural economy. “

It was acquired by Quintin Hogg, the father of the late Lord Hailsham, who was very hands on with the institute, and was the first Polytechnic in London.

A previous article I wrote about the Poly and its central role in ensuring the 1908 Olympics went ahead has been lost though I do have a paper copy somewhere. Back to today: this once august institution seems to spend a lot of time now as a hot bed of lefty Marxist groups rather than anything constructive such as turning out people who are useful to society, but this latest announcement comes from the top and its alliance with ARUP, the architects designer planning consultant group. 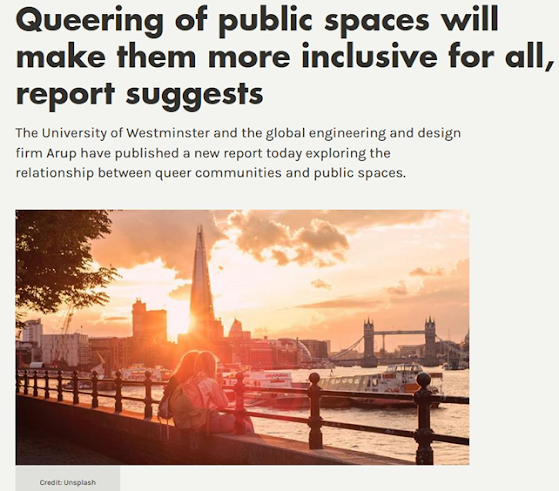 Does anyone really know what that headline means? In this time of diversity and inclusiveness any excuse is as good as another to change things that supposedly allow minorities to enjoy the fruits of life as do the rest of us; the only problem with that analogy is there is nothing to stop them now, and hasn’t been for decades. The ‘problem’ is a purely invented one.

It is worth reading the entire article:

The announcement from ARUP follows the same theme.

But what does it actually say? The bulk of it is verbal diarrhoea, it says nothing, it just fills a page with gobbledegook. This passage is a classic:

"They also said that inclusive design should contribute to the desistance of hate crime and promote the inclusion of marginalised and disempowered groups in public space. Professor Catterall and Dr Azzouz suggest attention to the scale and mass of buildings, lighting features, colours and facades and the addition of curvilinear aspects are amongst the design techniques that can help achieve this objective."

'Marginalised, disempowered, hate crime,' it is all in there - and apparently the size of buildings can make a difference! How, is not defined.

The ARUP version incorporates a review jointly produced by themselves and the Westminster University, here:

What I do not understand is why, after telling us they have what have become ‘gayborhoods’ or queer enclaves, is there a necessity to have them spread out into the general areas. They have the ability to do that now, no one is stopping them, these days minorities rule, so what is the problem?

For everyone else the constant bombardment with rainbow flags, crossings etc is wearing. Like all progressive movements there is a limit that when crossed creates a divide, which was not the original purpose.

Many from the gay community have spoken out about all this. Wokery on their behalf is not wanted, they are quite happy to continue with their lives as is. Those extroverts that seem to infest gay pride parades with their extreme agenda are a small part of the gay community. If 'queering places' means this is the next step I suggest they stay in gayborhoods.

The AJ (Architects Journal) has a broader, more practical approach to the report, yet still talks as if there is a problem. Is there really a problem? The AJ refers to safe spaces in universities for minority groups and wants to incorporate this theme in outside areas; I ask why? Putting rainbow flags everywhere doesn’t automatically give a safe space, it indicates what that place represents and could give a reverse signal to anyone so inclined to want to make trouble; but aren’t we past  the days of the Naked Civil Servant? Isn’t all this a complete overkill to suit one minority, and do they really want it?

When I grew up in the East End of London many of our haunts were gay pubs. Why? Because they provided the best entertainment, nothing more nothing less. The customers that frequented these places went there mainly for the entertainment, there was never an ulterior motive. Now, gay pubs are for gays only; is that really progress?

Has everyone become such wimps in life that they have to demand protection from everything, hurty words, demanding to be called this and wondering why they get the wrong answer? Isn’t it all getting totally out of hand. Can’t all minorities just get on with their lives like the rest of us without having to need a crutch for every perceived slight?

Oh, and I have probably just committed a hate crime.

On top of the above Sutton council in south London have just unveiled their first trans road crossing; this they believe will lead to more inclusivity? They already have a permanent rainbow crossing; if they carry on with all the genders it will be interesting to see the first time someone is knocked down on one of these crossing because the driver had not a clue what it was. There is the usual waffle from the councillors who you would have thought had more pressing items in the borough, though of course if you appoint a “lead member for Equalities” I suppose you have to give him something to do:

As with nearly all articles on subjects like this, you finish reading and say ’so what’ ? It is such infantile stuff. How anyone can take this seriously is amazing. I should say that, with days for almost everything, from causes to groups and individuals being created all the time, we must eventually run out of things to celebrate. Perhaps we can declare the whole year a bank holiday, or have we just had that, and all buildings to have mandatory flags, from trans groups to 'save Palestine' month, Black History month, clapping for the NHS, anti-slavery week, LGBQT  history month (see below, and do they really need a month?) and on and on. 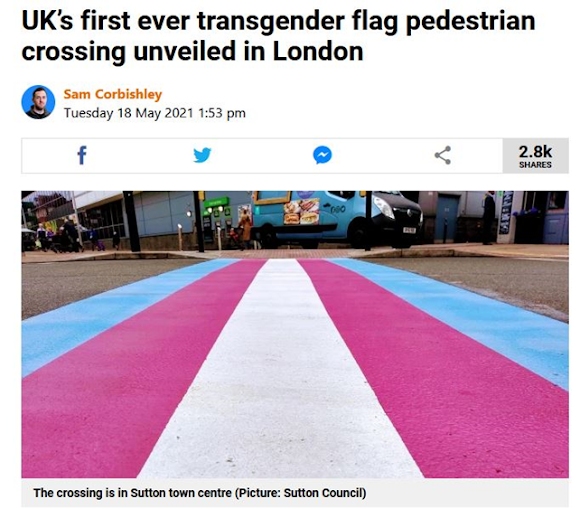 In closing, I have to ask how can these random crossings be legal? We have zebra crossings which are the legal black-and-white ones; how many others are in the official traffic regulations?

And if they are to be made legal, can we have some decent ones? ... 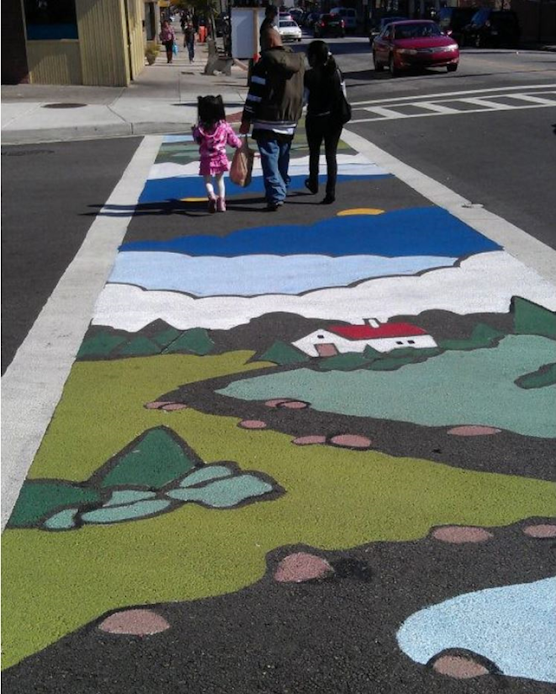 Having taken all this in we need a rest, and naturally there is a rainbow answer to ease your aching mind: 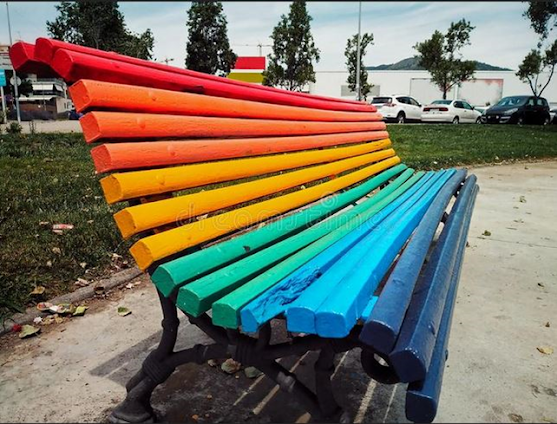 Not sure if I'm queer or not, Wiggia, but I do know it's Sackerson's birthday today. MHR of the D to him. :)

Back when we watched the BBC News, which is several years ago, there was often a delightful bloke who sometimes reviewed the morning papers. We really liked his relaxed style, and good humour.

One day, he just mentioned that he was in fact gay, and nobody batted an eyelid here but his great response to the raised eyebrow of the presenter, was that yes, he was gay, but he didn't parade around his home town, (Brighton), wearing a leather thong!

We liked him even more for that!

Improving spaces for marginalised groups, well, looking around the media it would appear there is a desperate need to accommodate straight white males and white women not married to black men and without purple or blue hair.

We could demand a safe space for both...

It might not be an issue on the UK, but in the US, there are significant numbers of murders and attacks on gay and transgender people.

We have all of it: anti-gay, anti-trans, anti-atheist, anti-Jew, anti-Muslim, anti-Sikh, anti-Hindu, anti-immigrant, and the rest.