Topping the chart at the start of the year is Johnny Tillotson with 'Poetry In Motion':

Giles cartoon for this week: The London Boat Show 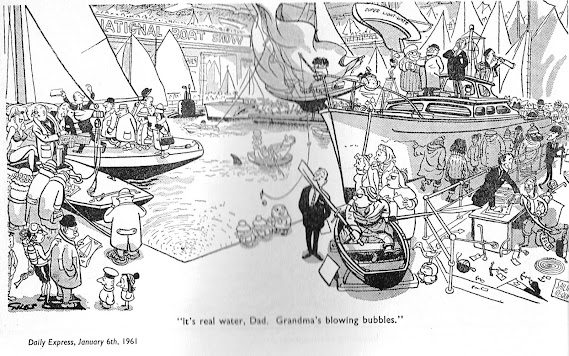 The seventh London International Boat Show was held at Earl's Court from 4 - 14 January 1961 - Pathé News preview here. The last show was in 2018.
The first opened at the Empire Hall, Olympia on 30 December 1954 (Pathé clip here), sponsored by the Daily Express (Giles' employer), whose chairman Max Aitken was himself 'a keen power boat sailor.'
One of those who helped set up the exhibition was award-winning Hampshire-born boatbuilder Jack Chippendale, who in 1954 had just formed a company, Chippendale Boats, to market self-assembly boat kits using a new technique of glued construction and went on to help found the annual Southampton International Boat Show.
Some memorable events (via Wikipedia):
1 January: 'The British farthing coin, used since the 13th century, and worth 1/4 of a penny, ceased to be legal tender.'
2 January: 'Cuba's Prime Minister, Fidel Castro, demanded that the United States Embassy in Havana reduce its staff from 87 to no more than 11 no later than Wednesday. U.S. President Eisenhower ended diplomatic relations with Cuba the next day.'
3 January: 'At the United States National Reactor Testing Station near Idaho Falls, Idaho, the atomic reactor SL-1 exploded, killing three military technicians.'
4 January: 'East Germany's Chancellor and Communist party chief, Walter Ulbricht, held a secret emergency meeting of the Politburo of his Socialist Unity Party of Germany, the SED, and told his fellow party leaders that East Germany's own economic failures accounted for 60% of the departure of East Germans to West Germany. He warned the SED that the nation needed to take action to fix housing shortages, low wages, inadequate pensions, and the six-day workweek before the end of the year. Ulbricht also criticized East German schools, pointing out that 75% of the people who left were younger than 25. Most importantly, he created a task force to stop the loss of refugees; the solution would come in the form of the Berlin Wall and the heavily-guarded border in August.'
5 January: 'Mister Ed, one of the first "fantasy sitcoms" on American television, premiered as a syndicated TV program and would be picked up by the CBS network beginning on October 1.' It featured a talking horse.
6 January: 'John F. Kennedy was formally elected as the 35th president of the United States, as a joint session of the U.S. Congress witnessed the counting of the electoral vote. U.S. Vice-President Richard Nixon, who had opposed Kennedy in the 1960 election, formally announced the result, saying, "I now declare John F. Kennedy elected president." The results were 303 votes for Kennedy, 219 for Nixon, and 15 for U.S. Senator Harry F. Byrd, Jr..'
7 January: 'Following a four-day conference in Casablanca, five African chiefs of state announced plans for a NATO-type African organization to ensure common defense. From the Charter of Casablanca emerged the Casablanca Group, consisting of Morocco, the United Arab Republic, Ghana, Guinea, and Mali.'
UK chart hits, week ending 7 January 1961
Htp: Clint's labour-of love compilation https://www.sixtiescity.net/charts/61chart.htm 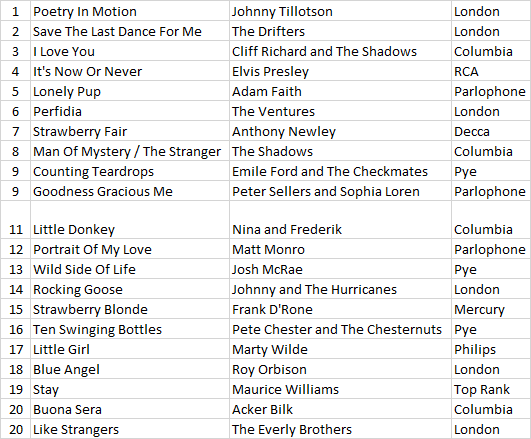