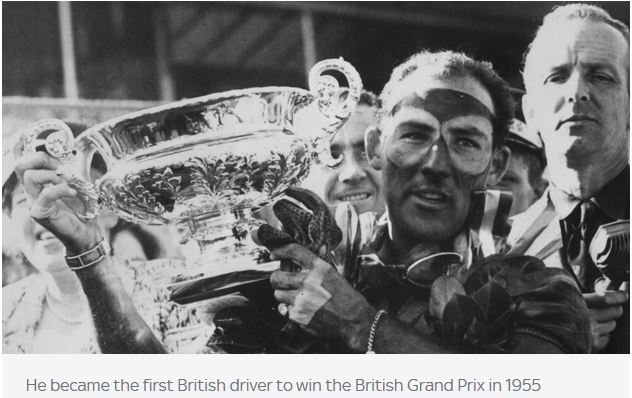 By coincidence it was only a week or so ago that I said to the wife, 'We haven’t heard much about Stirling Moss.' I was aware that he had been unwell ever since he contracted a serious chest infection in Singapore in  December 2016 and retired from the public eye on return after 134 days in hospital, so he was anything but a well man.

Yet somehow with the likes of Moss they become so embedded in our psyche that they are mentally to us always there, immortal; of course, no one is, but with some people that is how it seems.

When I was a youngster, Stirling Moss was the stand-out British driver of the age, an icon; the phrase often used by police if they stopped a speeding driver was, 'Who do you think you are, Stirling Moss?' and it stuck.

I am not going into a long résumé of his life, there will be far better versions out there in the near future by those in the know than I could ever cobble together, but it certainly was an interesting life and one played out at probably the most glamorous and most dangerous time in motor sport. Drivers and motor cycle racers died at alarming rates in those days and for far too long it was taken as being part of the job; in fact I would go further, it was not considered to be anything other than expected, so all carried on regardless.

Moss was one of those British drivers that made the sport glamorous: the girls, the parties, the venues all added to the overall 'dashing racing driver' image promulgated at the time. 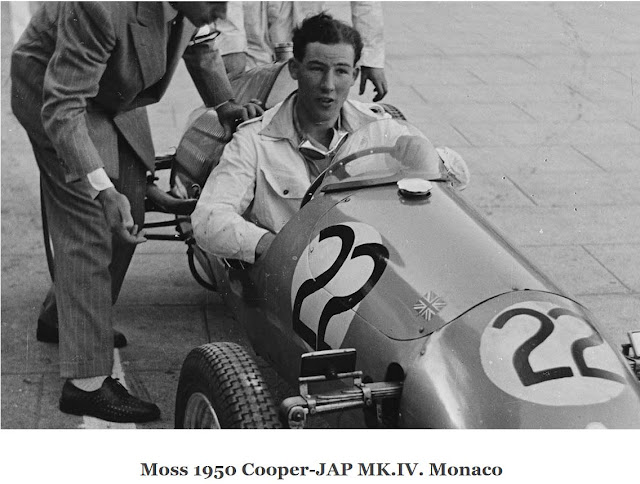 He was also a bridge between those earlier legendary days of pre-war racing and the emergence of Fangio, on into the resurgence of British racing car design that in many ways saw us become the leaders in that area, to Britain as it is today.

He was very much part of the jump from cars like the Maserati 250 F, every boy's real racing car, to the early Cooper Climax and the wonderful designs by Chapman and Eric Broadley and others that put us in the top tier of motor racing. Enzo Ferrari didn’t like it one bit, calling them ‘garagistas’ - a condescending remark about small race car operations - and saying ‘aerodynamics are for people who can't build engines'; statements which backfired on him for a while. 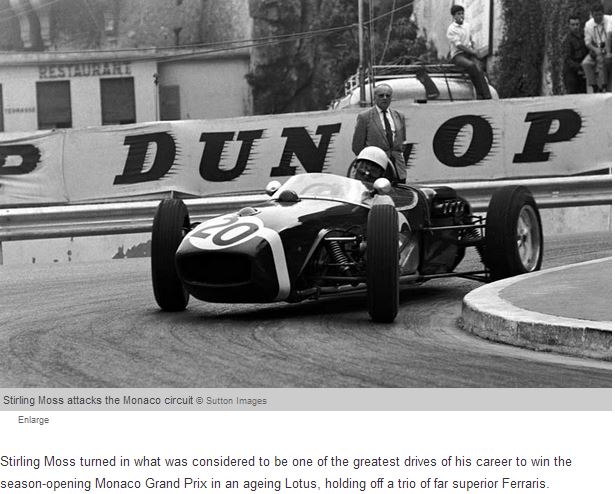 Moss was also the bridge between the previous generation of racing drivers, the gentleman drivers, many who had money and indulged themselves with fast cars. The day of the social-climbing talented driver was only just beginning; the likes of himself, Peter Collins, Mike Hawthorn and later Graham Hill were every boy's notion of what a racing driver driver should look like and be. They said what they liked, they were seen everywhere with glamorous women, drove fast on public roads, were feted on TV chat shows and were known by name by a large part of the public. The corporate restricted driver was yet to come but come he did and in my opinion the public's interest has waned, apart from petrol heads: who on the Clapham omnibus wants to know who was fastest on the second set of qualifying tires? Answer: no-one.

Moss was not a rags to riches driver. His parents were middle class, his father a dentist who Moss spoke of as having invested wisely in property in central London. Moss went to several independent  schools including Haileybury where he suffered from anti-semitic bullying because of his Jewish roots.

His father, an amateur race driver before the war, purchased an Austin 7 for young Stirling at the age of nine that he could drive round their grounds in. It was the start of a long love affair with cars, racing cars that is. His first successes came in what was the equivalent today of Karting, 500cc rear engined race cars using Manx Norton engines. He was an accomplished horseman and competed, as did his talented sister Sheila, and the winnings from the equestrian world went towards his first race car, a Cooper Norton. His father was reluctant to see his son start racing cars as he wanted him to follow in his own footsteps and be a dentist. 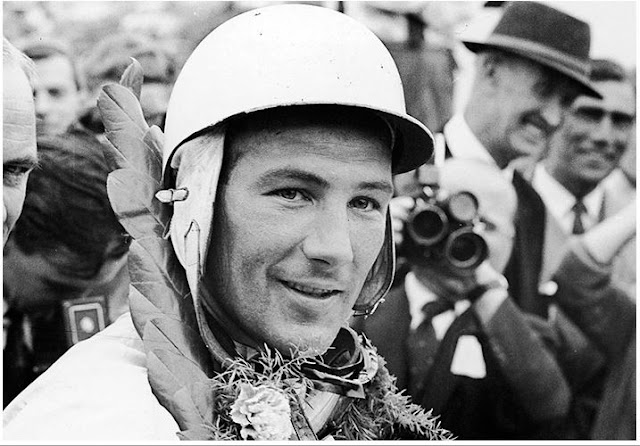 The rest is history. Moss was not an exclusive driver of Grand Prix cars as like most drivers of the era he drove almost anything and his win in the Mille Miglia in 1955 was for many his greatest drive: a road race round Italy in a Mercedes with his co-driver Denis Jenkinson, who relayed directions using pace notes as in rallies today. Ten plus hours of driving on your own; just staying awake was an achievement, but in Moss fashion 'After the win, he spent the night and the following day driving his girlfriend to Cologne, stopping for breakfast in Munich and lunch in Stuttgart.' Ah, golden days indeed.

It was also one of the few times he beat his then team mate Fangio. If he had a weakness it was his deference to Fangio; always he put Fangio on a pedestal and when he did beat him it was because Fangio let him or he had an off day. Actually, in many people's opinion he was never Fangio's inferior; Fangio was just the elder statesman, to be deferred to. 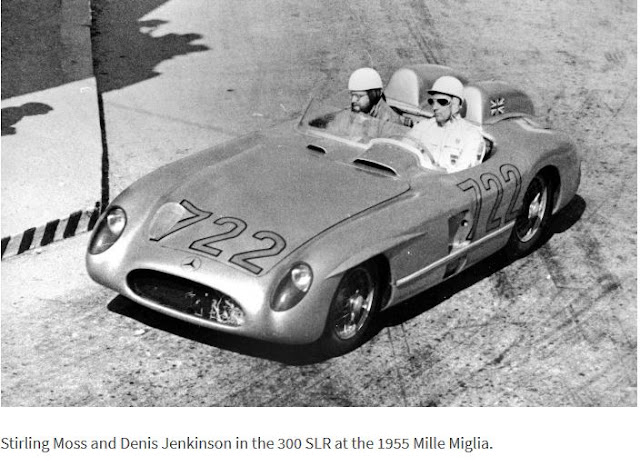 Moss drove 84 different machines during his racing career, unimaginable today. In later years, after Mercedes he drove British cars, despite never having the best works cars: he drove for a private outfit - Rob Walker was one - and they would have last year's cars with updates, never the current Grand Prix model, which naturally put him at a disadvantage. Why not drive for a foreign factory again? He answered, 'Better to lose honourably in a British car than win in a foreign one'; always one to show the Union flag, he did so to the end.

I was fortunate to see Moss drive on a few occasions before my own short and expensive foray into motor racing. One outing in particular stood out: in a last year's Lotus 24 (the 25 revolutionised Grand Prix cars) he was in an early pre-season race at Goodwood, not a Grand Prix; the cars were really using the race in many ways for a shake down before the season proper, and there was much pitting and adjustments being made. Moss more than most, but each time he reappeared he seemed to take great chunks out of the opposition and it was ‘round’ the corners he did it, not on braking, not on acceleration but with sheer corner speed; you could see him time and again close on the opposition, a masterclass in driving skills.

Sadly this was the last time Moss would race. He crashed out of sight on the far side of the circuit, a plume of smoke went up and the word soon spread that it was Moss. As always he drove flat out even when it didn't matter, he had lost several laps with pit stops; what happened was never fully explained. Did he overdo it, did he get on the grass and lose it? Moss himself was never sure, as he was in a coma for some time, but it was the end

After his crash in ‘62 the resultant injuries and near death caused a pause and when he tested again that was it, he did not feel he had got back to where he should be and retired.

Most race drivers when they retire start their own teams, go into managing teams or something similar. With Moss he made a very good living out of being Stirling Moss. Even his house in Mayfair, which he lived in to the end, was pure Stirling, with modern gadgets that got it into the House Beautiful magazines, such was its high tech interior much inspired by Moss himself. He raced vintage cars, made public appearances around the world and as in an earlier time loved telling the world all about his career and life.

Was he the best? To answer that is always an impossible task, as all eras in sport are different. It is all relative, and today total wins seems to cancel out any other attributes which would put Moss out of the frame; but for me, yes: I have never seen anyone with that car control. 'Who do you think you are, Stirling Moss?' We have all wished we were, at one time or another ! 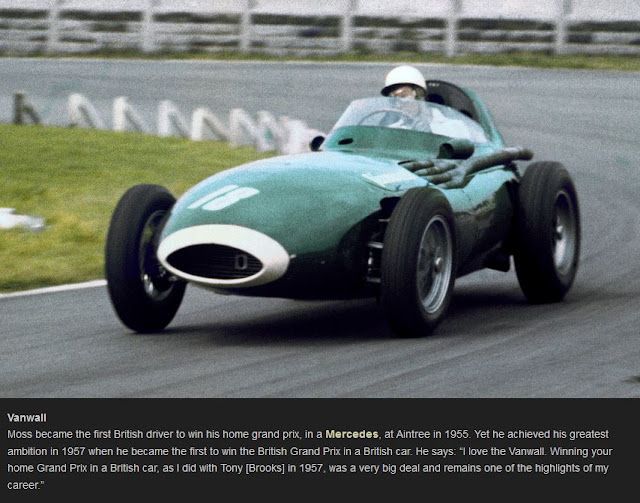 Were you around when Brands Hatch used to host an August Bank Holiday meeting?

They'd put on a dozen or so races, and bring in Archie Scott-Brown (one-armed), Stuart Lewis-Evans (who won the Bodiam Hill Climb one year - fabulous day out), and others like Graham Hill, driving an Austin A35 like a maniac...

The smell of Castrol-R lingered well into the week, and we'd talk about the races for ages afterwards!

Not so much Michael, I only attended a few race meetings in the early sixties before my own dabble at it, before then I was a gofer to my oldest friend who raced motorcycles so had a decent knowledge of the circuits before I raced, in all honesty I preferred the bikes, but was to old to start racing them.
Castrol R, I used it but most race car engines by then had moved on from vegetable based oils, the earlier period with the bikes was nearly all Castrol R, the aroma of the race track.

I loved Brands Hatch especially the long circuit, Silverstone then was horrible but a left over from the war and lack of circuits, Oulton Park was also very good, and later Donington though that was after I dabbled.
The last race meeting I attended as a spectator in those days was at Brands for an end of season motor cycle meet called the Race of the South, it was the last meeting before they changed the rules on what bikes could have in the way of engines, so there were Nine speed Yamaha V4s 250s three cylinder MV 500ccc six cylinder Honda 305cc ridden by Hailwood and virtually everything else all in one race, the sight and sound never to be repeated, Bill Ivy may even if my memory is correct riding the 125cc V4 Yamaha in the same raceplus there was the works Suzuki two strokes also V4s, amazing meeting I can still hear the Yamahas changing down gears at the end of the back straight, screaming is the word, happy days, oh Hailwood won on his favorite bike the six cylinder Honda.
You are talking of a time when the top drivers drove in several types of car at one meeting, and all could be seen doing battle in Lotus Cortinas for example, and the bike riders would ride in different engine classes at the Grand Prixs not just the premier class.

A great read, cheering in its way.

I was also at that Goodwood meeting and remember the silence when the ambulance taking him to hospital passed us.It just did not seem possible that someone as good as Moss could crash like that.