This government has made great play about building houses to fill a need for people desperate to get a home. Various schemes, Home Start and the like have been introduced to ‘help’ people get on the housing ladder. Housebuilders give incentives like discounts - that aren’t really; part exchange; deferred mortgage payments; contributions to removal costs and other add-ons all to get mainly young couples into their badly built rabbit hutches.

It has been going on for years: ever smaller homes on ever smaller plots which only maximises the builder's profits, the granting of planning on more and more green belt as it is cheaper to build on that than in urban areas and the willingness of councils to allow every small green space including back gardens to be marked for building; and the undoubted acceptance of brown envelopes from builders to get that permission - not an urban myth, a fact of which I could quote two examples that I know.

These are ‘Tiny Houses’, an idea that has been used in the States and the Continent as a way of providing temporary? or cheap one-person houses at an affordable price. Naturally the land they are built on decides the price, but don’t give the house builders ideas: they would like nothing more than  to build, I resist using the word 'homes', these things no different from a seaside beach huts - at inflated prices.

Having gone this far, the government could always take the route that in many countries provides a roof over people's heads - and they have to a degree already done it by turning a blind eye to many areas with high immigrant populations, where garden sheds and garages are turned illegally into accommodation: why not go the whole hog and allow favelas? 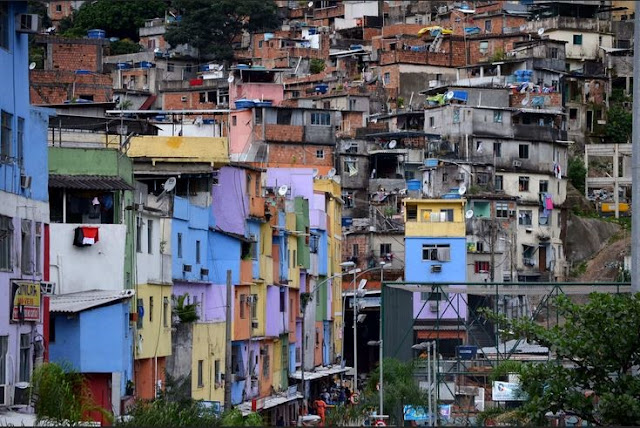 Over all the years this has been going on one thing above all else has been missing: the infrastructure to support all these estates. Our road system is chaotic and  in this crowded island the same roads are expected to carry ever more traffic - never do you see new roads, only feeder roads onto existing ones. The provision of new schools, doctors' surgeries (not that we have the doctors to man them now), shops etc mean existing providers are inundated with extra clients they cannot look after properly in regards to health and education.

But in the last few years there has been a significant shift in the Conservative Party towards a free-for-all as regards planning: a couple of easements in regards to what you can extend without planning (and bugger the neighbour who loses light and privacy!) as examples, and a loosening of the green belt laws - as we all know, brownfield sites are too expensive for our builders to consider without considerable help from councils with easings, and as in the recent case of a certain Mr Desmond in Tower Hamlets, quite a bit more than that:

“Marxist doe”: The money at the heart of the Robert Jenrick planning row

I saw a good example of how the public is conned, the council keeps schtum and builders gain when I lived not far from Stansted airport near Great Dunmow, Essex. This was when (in the late Eighties / early Nineties) Stansted was expanding at a rate and as usual ‘workers’ needed places nearby to live. Our beneficent building sector were glad to step in and help: a total of 1500 homes were planned on two sites, one of a thousand units and one of five hundred; the thousand-unit site would incorporate a school, shopping centre and doctor's surgery and community centre.

The objections to this came in thick and fast: too much, unnecessary, blah blah, from the protest groups. After much to and froing the council said the thousand unit section would be halved and the five hundred unit one would be scrapped. The builders sat on their hands during all this as they had no obligation to provide for the five hundred units the extra infrastructure they would have had to provide for the thousand. Of course this was never revealed at the protest meetings by any party.
So the five hundred were built, retrospective planning was submitted for the other five hundred and passed and probably another couple of thousand units have gone up since, all without infrastructure of any worthwhile sort provided by the builders (I no longer live in the area so cannot be sure of the facts of later development but would take a fair bet I am not far wrong as it is a pattern repeated nationwide.)

We have all seen the individual who makes the DM front pages with his illegal building hidden behind straw bales and the like, and take great pleasure in seeing it rightly demolished as it had no planning permission; but little is said about the reverse - now why would that be, when for example (also in Essex) a traveller commandeered a lay-by, hooked up to an electricity pole and fought for the right to stay. He won. The address, and I kid you not, is 'No1 The Lay-by'; paid not a cent for it and it is now a legal building.

That was a long time ago but the precedent stands, and we all saw what happened after spending millions of taxpayers' money at Dale Farm, another travellers' site turned legal by refusal of the authorities to do anything about it at the onset. They are extreme examples of a particular type of the flaunting of planning regs but nonetheless the illegals prevailed at a cost to the local community on many fronts.

What is being proposed here -

New homes to get 'automatic' permission in England planning shake-up

- is nothing more than the total subversion of all planning laws, inadequate and perverted over time as they have been. Where I live now a privately-owned large field sloping down to a picturesque river and including a part flood plain and water meadow was subjected to a planning application by the absent owner. It took a lot of effort by local people who resisted this application, including raising money for environmental, legal and non-suitability-for-building reports by professional independent assessors to get this application thrown out and rightly so, but an appeal was made and the planning inspector came down in favour of the objectors.

An aside to this was the cost: it turns out the applicant had an agreement with Taylor Wimpey that they would fund the legal costs on their side win or lose, as the land had in effect been sold to them in the event of the planning being granted. It is expensive and difficult to fight big builders in cases like this. What hope is there for that land now, seemingly having won the fight only less than two years ago?

Do we really need all these houses? Well yes, if you allow immigration to boom as it has for years now, that of course is a separate argument but a valid one as we decide (or rather, our Tory government decides for us) this is the way forward. This is a relatively small island; there has to be a limit or we end up as a giant version of Hong Kong and the ridiculous proposal we should decant three million Chinese here is perhaps an indication that that is what the Government wants !

As a nation we have been governed appallingly by successive administrations. This is just another off -loading of responsibility of government to local authority and having seen local authorities tread water, avoid issues and take their ill-gotten salaries and pensions from the ever-increasing local taxes which never seem to give anything back to us in return, I for one would not trust them to run the proverbial whelk stall. Their track record in this area proves it. You only have to look at Milton Keynes: I had no idea you could bulk buy roundabouts but Milton Keynes planners thought it a good idea to buy them all and foist them on the motorist, with absolutely no one at all having responsibility.*

With planning all local councils are interested in is the extra council tax take, no less, no more; their actions prove it. Like the NHS patient, the resident has become a hindrance, so by-pass him.

What is being proposed is the usual 'get out of jail' card being played, rather than having a meaningful appraisal of the convoluted planning laws and streamlining them to avoid the endless bottlenecks. It is much easier to grease the road ahead for those Tory donors, isn’t it, and to blight for ever many areas that until now have escaped the new-build horrors.

I expect this new proposal will escape scrutiny as we are obsessed with the latest non-deaths with the Covid virus - they can and have kept that going long enough to slip several pieces of legislation through unnoticed, it’s what governments do.

For the first time in my life I did not vote at the last election as I felt there was no one to vote for worth my vote. I did have some reservations about that but the events and handling since have vindicated my decision and as the late George Carlin said:

*Sackerson adds: this article on the development of Milton Keynes is interesting if not enraging:
https://www.theguardian.com/cities/2016/may/03/struggle-for-the-soul-of-milton-keynes - sample:

'Milton Keynes also defied 1970s austerity because it was built using a mechanism that some urban planners say could be used to solve the current housing crisis. It was a state-funded city. The government loaned the corporation money, and the corporation could (eventually) return its investment because it was entitled, under the New Towns Act, to buy land at agricultural prices. As soon as this land was developed, it became far more valuable: this uplift paid for MK’s infrastructure.'

40 years on and Douglas Adams' Hitchhiker's Guide To The Galaxy seems more relevant than ever:

P.S. It looks as though Exeter, Devon is for it, after some skirmishes:
https://www.devonlive.com/news/devon-news/greater-exeter-strategic-plan-next-4380102

- as previously Totnes, Ivybridge, Dartington etc., further west. And as for the planning blight in Cornwall, the ring roads with their hypermarkets, the withering of town centres and the social decay, let those who have seen St Austell (for example) bear witness.

It is been going on a long time. In the North East we all remember T Dan Smith who ripped the heart out of Newcastle city centre in order to 'improve' it and turn it into the Brasilia of the North (Brasilia wasn't all that successful either) But Dan the Plan ended up in prison for corruption with the usual political refrain of 'I did nothing wrong'