SOMETHING FOR THE WEEKEND: Jab, by Wiggia 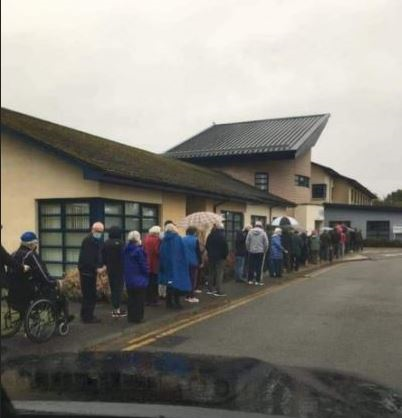 I wasn’t going to do a post for a while as we are embroiled in moving house or maybe moving house soon and there is a mega post in the not too distant future about the farce, and often a very expensive one, that constitutes the act of moving.

No, this about getting a vaccine jab. Since we are defined as extremely vulnerable, whatever that means these days, we got the call that we were being given a slot to receive our first jab, and were given times of 3.45 and 3.50 respectively, I naturally assumed it was to be like the normal flu jab, in and out at the chosen time in five minutes; how wrong I was.

No comment from me on the efficacy of the vaccine or any long term effects or whether we should be taking it at all; that bit has been done to death on social media blogs; even the MSM have had a small bite at it. The only reason I went along was because my wife wanted it and I have to drive her to the venue - difficult to just leave her there - and as it turned out, just as well.

When I received the phone call with our appointment I naturally assumed it was to be given at our large two-storey medical centre. As it has been and still is grossly underused it seemed the ideal place, but no, the authorities in their wisdom have decided we will have regional ‘hubs’. Buzz words abound since the pandemic arrived and are used in an attempt to confuse and amaze us at every opportunity, after all this time I have no idea what a ‘support bubble’ is and frankly don’t care, the whole thing has become rather amateurish, plain English has been sidelined in favour of woke phrases.

Anyway, the hub is not far from us and is itself another medical centre which adjoins a supermarket car park used by both and I assume is the reason for the choice.

On arrival we find a space and wander towards the medical centre or 'surgery' in old-speak, only to see an enormous queue stretching out from the entrance past the island flower beds, round the same and up to the walls of the supermarket. This can’t be right, I say, we have a dedicated slot and will never get in at that time despite being ten minutes early.

Alas dear reader the queue was indeed full of people with dedicated slots; it appears that they only give you a time to spread arrivals. Still it did appear to be moving and it was a lovely sunny winter's afternoon.

The queue of course was full of elderly people up to the age of eighty including my good self who is nudging in that direction far too quickly. Some were in wheelchairs, walking sticks were on parade and chairs, an ominous sign, were spread out along the queue line for those with ‘problems’.

It took over an hour in rapidly falling temperatures to reach the door, and even once inside the queue continued to snake round the entrance foyer until eventually the sliding door opened and you were given a ticket and ushered in to register, given a sheet of paper printed with yes/no questions on, 'have you recently been or are you susceptible to' etc. And then told to sit sit in a chair until called to one of the half a dozen desks to be assessed and signed off for the jab.

By now those outside were in the dark and plunging temperatures. What would have happened if it was pouring with rain or snowing as well, as it has been, I have no idea and nor do the people who think this is a good way to achieve their aim I suspect, a classic British fudge. No, it isn’t easy but during that shuffling hour outside, taking advantage of the scattered chairs because standing still is about the worst thing I can do with my arthritic hips, I had plenty of time to think of several ways this process could have been speeded up and improved; but who am I to complain, it’s free! And we are stoic and British.

The queue by the way was entirely white and if it had been viewed by the authorities I am sure they would have bussed in some BAME people to make it more representative and diverse and they could have sent them to the front of the queue to show grateful and humble we are as a nation.

We got talking to a lone lady in front of us who was a sharp as a tack. She was now on her own having lost her husband a couple of years back and has been suffering from cataracts; as is the norm now they won't even refer you until you are nearly blind and she was referred earlier this year. Still waiting, she is going private in a couple of weeks as the sight is so bad. What a nation, that can dump all ailments and diseases, many fatal if not treated, in favour of a flu virus. Something is very wrong indeed whereby that can be deemed acceptable in order to save the NHS, the same NHS that is in crisis every single winter.

Back inside we are called to the screening station which has a large poster of a hypodermic above the desk just to let you know why you are here, in case by that time hyperthermia had set in and you really didn’t care any more.

We passed scrutiny and a female doctor came read the paperwork and signed it releasing us for the next phase.

All the while as we shifted along some poor sod had to wipe the chairs with medicated wipes after we got up and moved. This applied to every person there and every time someone got up and was replaced; someone in the wipes manufacturing industry is making a fortune.

The lady doctor in charge of signing everyone off was working her backside off. She was literally running this arrival area alone. As I stood up to go to the jab area my bad hip almost gave way and she supported me as it looked like I was going to fall over; it was not that bad but something struck me as we spoke: she was the only person in the whole place not wearing a mask!

She was tireless and every now and then would go outside to the queue to see if any one needed to brought inside; several did.

The mask-wearing was interesting. In the outside queue I didn’t wear a mask but everyone else did, apart from one other rebel I spied some way back; people, especially the elderly. have been scared stiff by this incapable government and it increasingly shows.

Onto another wait area with numbers on seats. You are given a seat, eventually called and the seat is wiped again for the next recipient. Jab at last! Not quite: another small queue on a seat just wiped outside the jab area.

At last we were called in. Another young lady doctor received us, she was a rare thing in this day and age, ‘old school’, a sense of humour and a work ethic were evident. I asked out of curiosity why our medical centre was not being used to spread the load; she said the decision for regional hubs had come from above and anyway the doctors at our place would not want to interrupt their coffee break to help - 'refreshingly candid', I filed that under.

We replaced our coats and outside we had to wait for fifteen minutes in case of any reaction. Yes, you guessed it, more seat wiping before and after we left.

Making our way out into the dark you could just make out the queue in the glow of a couple of small street lights: it was as long as when we arrived. When we got back in the car the screen had frozen and the temperature gauge showed just over zero; by the time we got home it was minus one. That queue was in danger of giving people frost bite, utterly ridiculous - and we have to return for a second jab in twelve weeks.

Reaction to the jab: a bit woosy when I got home for about half an hour and a non stop streaming nose this morning. Was it all worthwhile? Not a clue.

One last thing about the regional hu:, my wife spoke to a lady who had come from a seaside town forty miles away for her jab, despite there being two regional hospitals nearby. Others had obviously travelled a distance also, as two mini buses drew up and disgorged their elderly passengers to join the long snake; they had addresses from far out villages. I would imagine some would find the journey a strain never mind a shuffling queue taking an hour to reach the door in the freezing temperatures and a total of two hours before leaving.

I am pretty sure Mr Hancock or his advisors will not be required to wait for their jabs under such circumstances so why should he think it is OK for the elderly to endure it? There is absolutely no sound reason our underused GP surgeries could not help out and spread the vaccination process; a bit more thought about the logistics is all that is required. Yet instead of that there is talk of bringing pharmacies into the process; now, since the pharmacist as it stands in this mad world is the only one regulated to give jabs. what will happen to all the medication dished out by the same pharmacist? The phrase 'run by idiots' comes to mind.

Not sure if they are jabbing today, but it is freezing and has been snowing, can’t think of a better way to bump off some more elderly people - perhaps that is the plan? They have been doing quite well in that area up to now; a final push!

The answer to the mystery of the single hub is that they are using the Pfizer vaccine. Because of the abnormal low temperatures it has to be stored at, this venue was decided on as the most suitable (?) Hence the people coming from far and wide for a jab.

As the Pfizer vaccine costs three times the AstraZeneca one and the latter can be used and stored normally, thereby lending itself to be used in many more locations, perhaps further purchases of the Pfizer one should be stopped; we could always use up the Pfizer one on politicians!

How long did it take, altogether?

How long did it take altogether?

Two hours, and by coincidence I spoke to my sister down in London who had the jab last week, she and her husband were given appointment times, went straight in signed in waited had the jab and were out in ten minutes, the vaccine was the AstraZeneca one which rather proves my point.

And in my county and the one next door in Ohio, there are something like 6,000 doses for all of the tens of thousands of aging residents, largely because President Trump turned down Pfizer's offer to sell them 60 million doses, and told them to sell them in other countries.