The first part of this post appeared originally on Nourishing Obscurity, here: 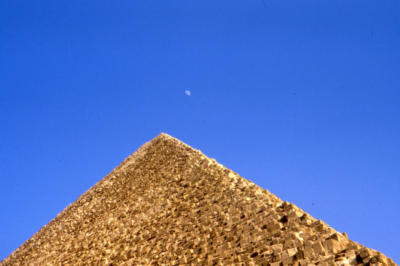 First introduction to the Pyramids comes on the road to Giza where the hedges are all shaped accordingly.

The only thing missing from the photograph below is sound. And the sound would be beep-beep. Non stop all day everywhere you go beep-beep; not an angry blaring of horns just a quick beep-beep for the sake of it. 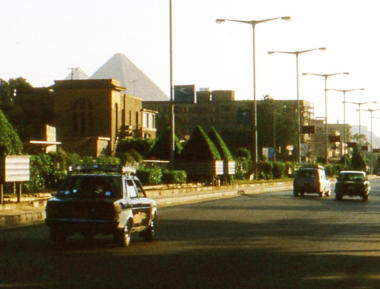 This is a very familiar sight. Everybody knows what they look like and we all know they are very large stone constructions but they are huge. It is not until you stand in front of them that you realise just how big they are.

At 480 feet, the Great Pyramid of Cheops (or Khufu if you prefer) is taller than any Cathedral in England. St.Paul’s in London measures 365 feet from the floor of the nave to the tip of the cross on the dome so it could easily disappear within the outline of the pyramid. 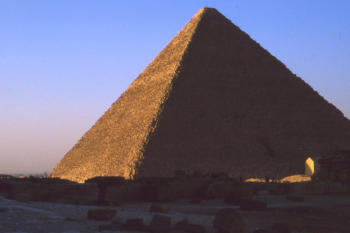 Here is a good indication of the size with people at the base and also at the entrance.
The sign sitting on the 7th course of blocks about halfway up to the entrance reads “no smoking inside the pyramid”.

I wonder what John Greaves would have thought of that; he carved the name ‘J Gravius’ in the King’s Chamber in 1637.

The limestone blocks are partially intact around the base as can be seen here. They say that if you want to see the Pyramids you just need visit Cairo’s City of the Dead where a lot of the casing stones were used for building houses and monuments.

Even more impressive was the red granite facing of the third pyramid. After all this time it still appears highly polished and the heiroglyphic characters on the face are clearly defined. The fit and finish of the stones is astonishing. 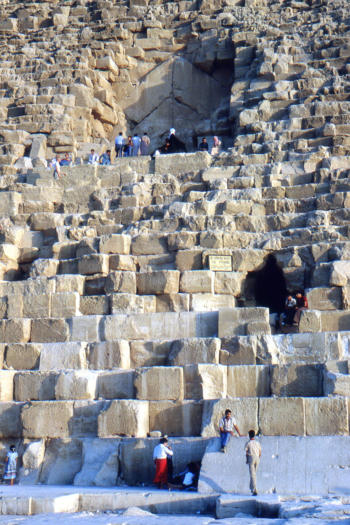 According to Herodotus it took twenty years for a force of 100,000 to build the pyramid. I heard some time ago of an American engineer who decided to calculate the time in man-hours that would be needed for the construction including all ancillary work such as quarrying, carving, hauling etc. His answer was more or less as Herodotus had said.

I may never return to Cairo but I am glad I was given the opportunity to see one of the wonders of the world. 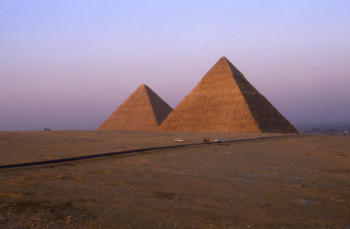 It has been more than thirty years since I took those photos and I have 'revisited' Giza in various books I have read over the years trying to get a better understanding of the enigma.

Recently I came across this video which sparked my interest once more. It's about half an hour and starts and ends with Nikola Tesla and in between it has Graham Hancock explaining the significance of the dimensions and location of Giza and its famous pyramids.

He didn't mention that the number 432 pops up again in the mean radius of the sun - 432,000 miles: and the famous Kali Yuga of Hinduism will last 432,000 years according to Sri Yukteswar (he is on the cover of Sgt Pepper top left corner!) I'm pretty sure Graham Hancock knows all that but he wouldn't want to make things too complicated or confusing.

When I first stood in front of the pyramid I thought "that is not possible!" but there it is, so it must have been possible for somebody at some point in history. Unlike Hancock I know how to build large structures but I still have no idea how it was done. A lot of years ago a friend of mine called it "God's calling card" which is no more nor less plausible than any of the other theories I have seen and heard.

There was a documentary where a group of archaeologists built a small one with the tools available in ancient Egypt.