If the 2003 reflation hadn't happened? 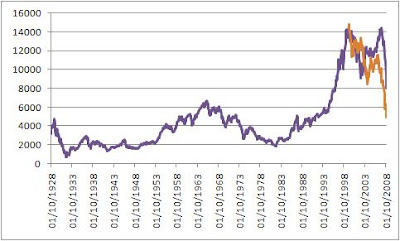 In the above graph, I show the Dow, adjusted for CPI, up to 19 November 2008, with an extra: the gold line is the same as what actually happened from the beginning of 1966 to November 1974, adjusted proportionately to the height of the boom at the end of 1999.

Interpreted and represented in this way, even the worst of the crash so far has not caught up with the mid-70s: the Dow closed last Wednesday at 7,997 where 32 years before it would have been the equivalent of 4,911. If that period of history were to repeat itself, the Dow would take another 7 years of whipsawing towards its low of 3,988 in today's terms.

So in my view, the monetary expansion of the last 6 years or so, has merely delayed progress a little. The drunkard has had a few more to put off the hangover.