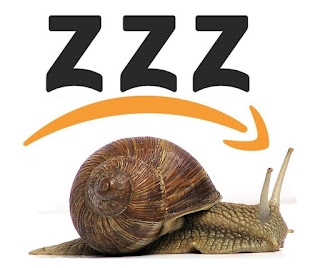 What could be easier? Sit in the comfort of your own home, browse at your leisure the things you want/desire/need, a few clicks of your mouse and the goods of your choice are swiftly despatched to your door. No problem, no venturing out in the rain, no trudging from shop to shop only to find the shops do not stock what you are looking for, no travelling and, of course, no 'worn out feeling' after you return home. Shop online and all your dreams will be fulfilled!

Unfortunately the reality is somewhat different.

Last week I checked, via Royal Mail 'track and trace' web page, the progress of an item I had ordered using this online shopping 'experience' (why is using the internet now described as an experience?) The Royal Mail site told me that my package had arrived at my local Delivery Office at 08:05 that morning and just as an aside, when and why did the sorting office become a delivery office? So I waited for delivery knowing that the sorting office is no more than half a mile from my house. And I waited. And then I waited some more. Where on earth was it? Eventually the van arrived with my package some time after 4pm. More than eight hours to travel half a mile! We have all heard of snail mail but that must be some sort of record; eight hours, half a mile, one sixteenth of a mile per hour: one hour for each half furlong. (For any dumbed own young people reading, half a furlong is 110yards or the length of five cricket pitches.)

When I mentioned the tale to a taxi driver he said "Aye well, ye know what the traffic is like these days!" Clearly he has the same sense of humour that I have.

Couple of days later I was sitting waiting once more for two more packages. I had emails from the suppliers telling me that my packages were despatched on the 20th and 22nd. Royal Mail website tells me that "in these 'difficult' times blah blah deliveries may take longer than usual blah blah" One of these packages has a tracking reference but the message was 'despatched' followed by '..we will let you know.'

Based on past experience that means they will let me know after it has been delivered!

Trying to find how to contact Royal Mail is impossible. The web page is a madhouse designed to misdirect customers into a labyrinth of choices and options all of which lead astray into further obfuscations of frequently asked questions, none of which offer any actual help. The telephone 'help' line is the usual 'press button one for...' etc and none of the buttons leads to an actual human voice.
Their web page is a wonderful demonstration of Hutber's Law ('improvement means deterioration') at its best. The law so beloved of web designers and bureaucrats everywhere. It is the law which underpins the Bible Of Bureaucratic Obfuscation or Bobo for short which is appropriate - https://www.collinsdictionary.com/dictionary/spanish-english/bobo

Just to add insult to injury, the opening hours of the sorting office have been changed and it is now open between 7am and 9am only. (It used to be open until noon.) So if I do miss a delivery I must then get up in the middle of the night to catch those opening hours which are inconveniently outside the hours during which my pensioner bus pass is valid!

The two errant packages eventually arrived on the 31st; after eleven days and nine days respectively. The Postie said the sorting office was 'chaos' with an above average number of packages and parcels; with everyone now frightened to go shopping they are all shopping online. Added to that are the staff shortages for either illness or the Government's generous 'furlough' scheme. Royal Mail is erratic at the best of times so this 'crisis' has geven them the perfect alibi for their poor service.

Before online shopping gets to the delivery stage there is the obstacle course of filling in the order form. Some are well designed and easy to use but some are bafflingly complex to my tired old brain. And sometimes they just do not work! Their are occasions when the order form flags up a message telling me my card is 'invalid' but a quick(?) phone call to the card company tells me that the card is valid and there is no block on it or what i am buying is well within the credit limit. There are times when I go round in circles trying to resolve things if the contact phone number, if any, is well hidden and so I just give up. If I do find a contact number, usually smaller companies and not the big names, there will be a cheerful and helpful voice on the other end. I will then place the order over the phone which is much quicker and easier than filling in the online order form. The person on the other end of the phone will have my failed order on screen which helps the process and the despatch is usually the same day.

I have not bought anything from Amazon for a long time. Not since they changed the way they operate which now seems to be as a reseller or agent for third party suppliers. But I have noticed that the name of the supplier is displayed, not very prominently, somewhere on the screen. I have found that by going to the supplier's web page the item is available directly from them. Very often it is the same price shown on Amazon's page and occasionally it may be cheaper. If it is non specific or one of a range, there will be alternative choices not shown at Amazon. I would recommend buying direct if possible. Why help a foreign inavader to dodge its share of tax liabilities?

Irony of ironies is that Amazon has been accused of helping to destroy the high street but they have recently announced they will be moving into the high street with lots of Amazon Shops!
https://www.dailymail.co.uk/news/article-8585211/Amazon-giant-plans-chain-UK-book-shops-cashless-convenience-stores.html

Cashless shops which automatically bill you when you take something from the shelves? I don't like the sound of that but the story prompted this perfect riposte in the comments from Billy M - "I'm a professional shoplifter. How the hell am I supposed to make a living if I sneak out with goods stuffed into my Y Fronts and then getting billed for them before I get home? This profession is stressful enough without added pressures."

Finally, a word about online grocery shopping. I am getting old and weary so buying some of the heavier items online made sense, it would save carrying it home. I rely on the bus these days having given up driving years ago. I did a tour of the Morrisons web pages, adding things to the 'basket' but when it came to checkout time I couldn't find the checkout. More spinning round in circles until eventually everything disappeared and a sign in the corner of the screen indicated that my 'basket' was empty. So I sent an email to Morrisinghs and a reply dawdled in a few days later. I don't think I am fit for the modern world because I didn't understand a word of the explanation of 'how to shop.' I did go back to their pages to have another try but I couldn't be bothered to spend ages going clickety click. It takes ages to go through all the choices. But I did notice that they now had a very prominent checkout sign in the top right corner.

I have since then been informed that their delivery service is less than perfect, with items missing or wrong items etc so I don't think I shall trouble them further. Come to think of it, I have not seen any of their vans. I have seen Asda vans and Iceland vans and the occasional Tesco van but Morrisons? No sign of one.

Internet shopping? Not a pleasant experience so far but it might be that it becomes unavoidable in the future. I think I need to advertise for a personal shopper who could also act as archivist for my vast collection of unsold and abandoned artworks. Any and all offers will be considered. I am not saying that the pay will be much but the experience and the entertainment value will be priceless!