A short piece on A K Haart’s blog about a SAAB 96 estate car gave enough food for thought for me to reply.

It set me thinking. I had some time ago mentioned in another piece about the Citroen DS that I had spent some time in a Safari version of that car, and which led me on to think (I will have to ration all this thinking, not good for me) how those great estate cars of yesteryear have largely disappeared and been replaced by either estate cars that are so well upholstered that they will never have a wet dog in the back, or the modern equivalent - the MPV or SPV or any other V that can take on board more than five people and luggage.

The Americans had capacious ‘station wagons’ long before we had this side of the pond. Many had ingenious items like rear doors that could open in various directions so giving flexible load areas and even providing a floor extension.

For me, the Citroen DS Safari is still the best of the European estates. It never sold in the quantities of its opposite number at Volvo the 240GL as there was an inbuilt fear (totally unwarranted) about the complicated suspension: it wasn’t it was just different, and it became the reason that the DS was the only estate car you could load up at the time while the car remained level and retained its superb ride.

The Volvo for good reason resembled a hearse and was the favoured vehicle of antique collectors. The Citroen also came in many altered states from ambulances various and camper conversions, all taking advantage again of the suspension.

During the same period Peugeot had another then utilitarian load carrier, the 404: this also had a long travel suspension that was as tough as old boots and many versions survived the treatment meted out to them in Africa and survived way past their sell by date. Simple to maintain and reliable, that is what is wanted in countries and continents like Africa in all things mechanical. 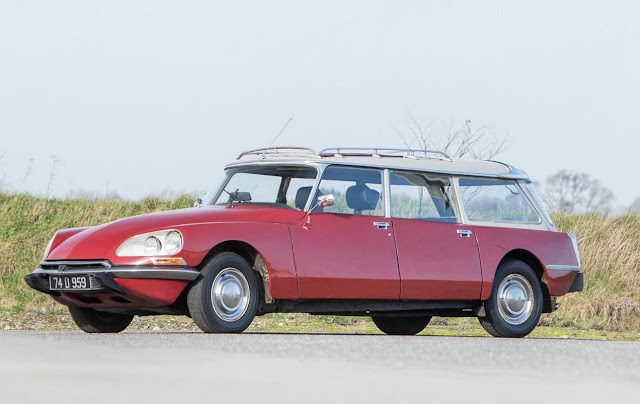 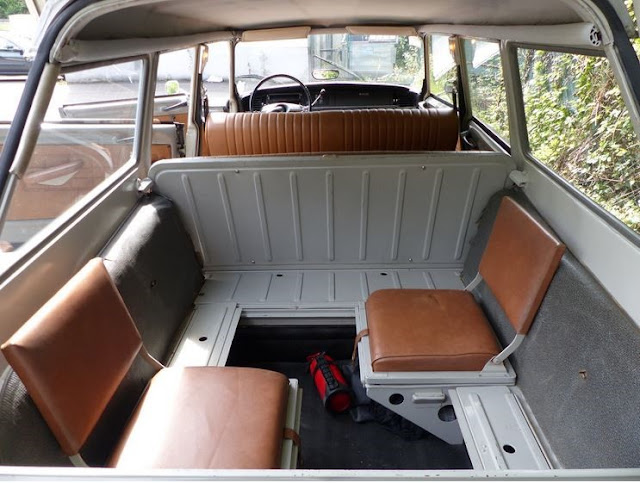 Again, the ride in the DS provided a wonderful example of its versatility, with the BBC camera car that was at the races for years. 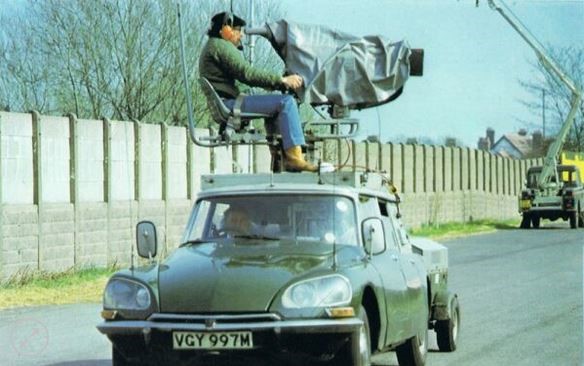 And of course the famous ambulance known as the Break !

The Volvo had this rear extension that was as near a cube as you could get, hence its ability to swallow large loads like grandfather clocks and settees. Never the prettiest of vehicles, it nonetheless clocked up a lot of reliable miles as a load lugger. It also had a reputation for being safe, being built like a tank. I went along with that until one day I saw one on the old Southend Road that had been hit in the back by an Austin A60: the Volvo had been bent in the middle. The A60 is much prized these days for banger racing and I know why. 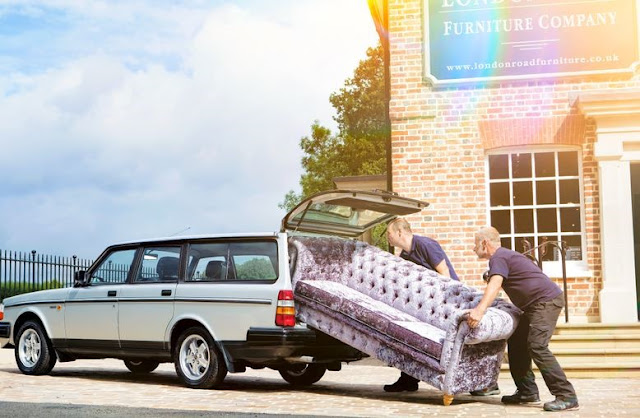 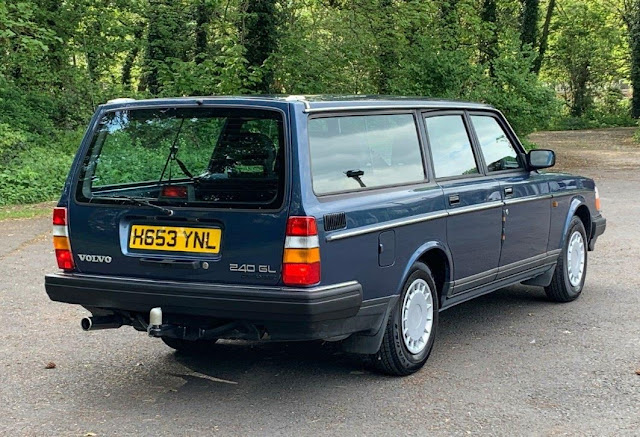 The Peugeot in its new found habitat ! 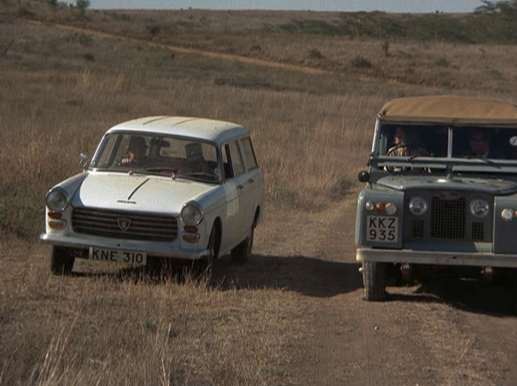 And now the little estate that started this piece off. I had a family link to one of these: my brother owned one and at the time he was friendly with the late Brian Glover, famous for his part in the film 'Kes' among other roles. He was fascinated with the rear facing seat and would sit in the back facing the traffic on his own as though filming the traffic behind him. The car originally came came with a two stroke engine and the saloon version had a stellar rally career with Erik Carlson who was married to another rather good driver and horse woman Pat Moss, sister of Stirling.

My brother's car had the Ford V4 engine that suited the little estate, though not the greatest of engines. 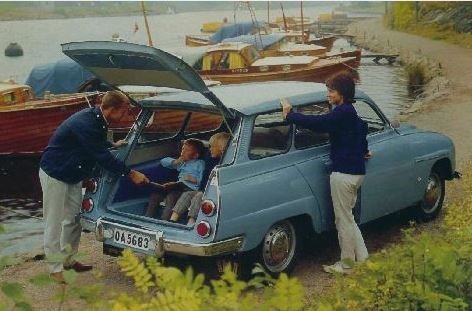 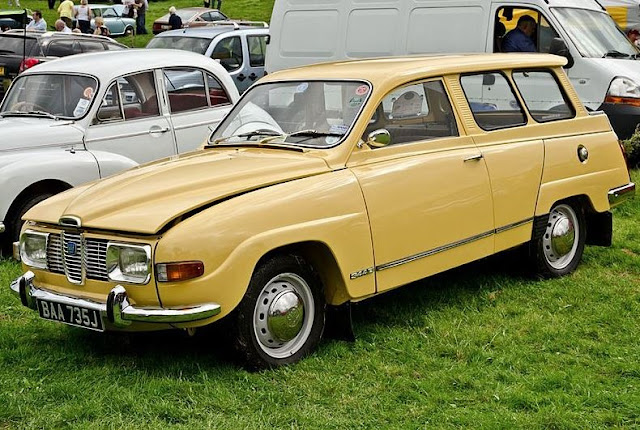 The American station wagon can be traced back to the early thirties but the ‘woodie’ is probably the one most people associate with from that period. The wood structure and side panels were replicated over here in the later Morris Minor Traveller; the woodie was also much sought after as a surfing accessory. 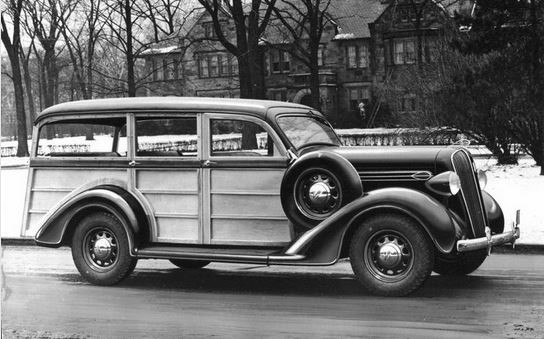 The one above is a Plymouth Westchester Suburban of ‘38 vintage.

Later 50s and sixties station wagons from over the pond were large, some very large, and had all the trappings of the saloons of the times plus cavernous rear space for cargo or extra seats. 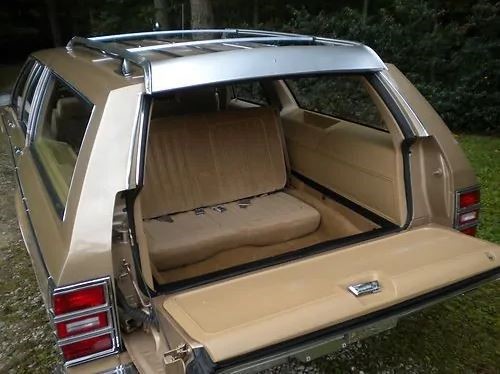 This one shows the space the seats and the multi opening rear door. The one below was rather a rare beast, a Studebaker Wagonaire from ‘65 that managed all the above plus an opening rear roof that turned it into a truck if you so wished. It never sold in big numbers as Studebaker never really solved the leaking roof. 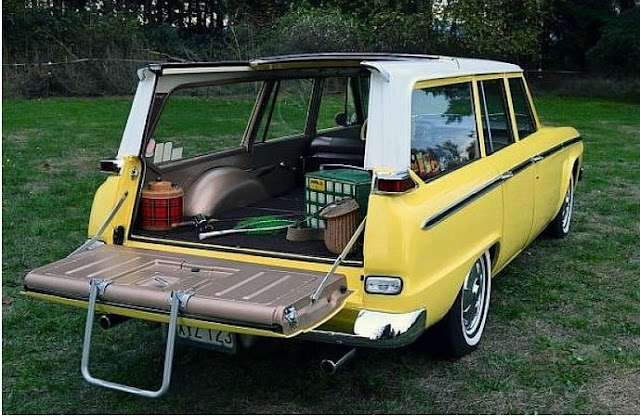 I personally only owned one estate that fitted into this category, a Citroen CX. This was the successor to the DS, another cavernous estate car with the Citroen hydraulic suspension, wonderful for long drives but hard work in town being a manual and having a brute of a clutch. I travelled the length and breadth of the country in mine attending dog shows, not the breed variety but for trained dogs.

It had an added advantage of entertaining children in other cars if you were stuck in traffic jams as you could raise and lower the suspension, always to great amazement from those looking. A downside to the car was that the suspension hydraulics were pumped up by the engine when running, so every morning or when starting the whole car would raise up. If you had a breakdown with engine failure of any sort the car remained on the floor, so the RAC had a special trailer for this as the car could not be winched onto a normal trailer because of lack of ground clearance. 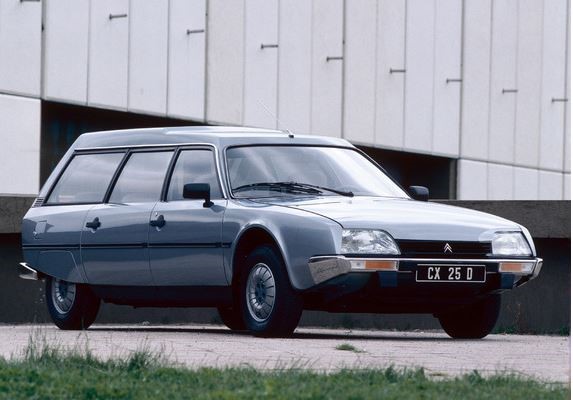 Again, the Citroen had many variants. Here's the  Loadrunner... 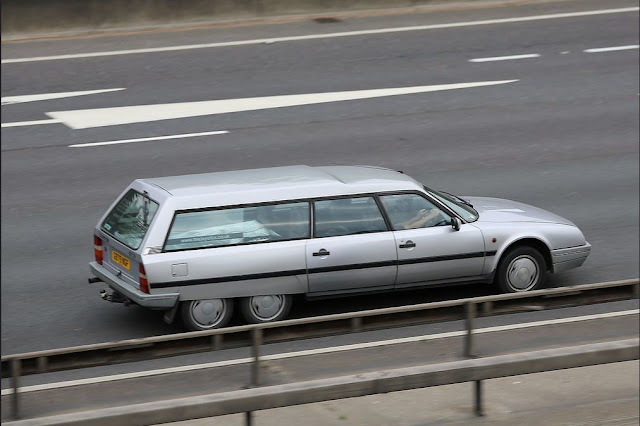 That period was probably the last for what could be termed real estate cars/station wagons. The upmarket versions put out after that by the likes of Mercedes and copied by others were complete with leather-lined rear areas and plush carpeting; to fit in a wet dog, a liner was required, where in a real estate car that would not be necessary. The designs changed as well: a sleek profile was now de rigeur rather than having headroom and space. It was the end of the estate car and the SUV /Range Rover lookalikes killed it off.

Will they return? Most things in life go full circle, perhaps people will get tired of the sameness of the SUV - and having to climb into Range Rovers: you get a good driving view with them but getting in the seat is like climbing into a lorry. Perhaps drivers will return to the more  normal estate car, who knows ?

Ultimate estate car must be a nice old Volvo, from when they were still boxy.

I completely agree with you - estate cars are wonderful and it's a great shame they are almost extinct.

The DS safari was indeed fantastic. I never owned one though I did drive DS 21 and 23 saloons, they were in many ways weird and wonderful and I'm not sure it was just the suspension (excellent) that put people off. The brakes were odd, the hydraulic gearchange was also odd, then there were the indicators that didn't self cancel and the row of identical switches the swivelling headlights and many other wonderful and eccentric features that gave it such a 'French' feel.

I drove a Volvo 240GLT as a company car for a while and found it very practical but I never really liked it for some reason. Perhaps because I had a Saab 95 v4 estate at the time. Eccentric and good fun but not a great load carrier.

I'd like to add the larger Peugeot 504 to your list of truely great estates and my personal favourite was a '85 VW Passat with the 2ltr, 5 cylinder engine. It was quiet, fast, economical and huge.

It is not just estates that have vanished, it is utilitarian cars generally. No one seems to produce a bare bones, easy to work on, get you there car any more, they are jammed fully of un-necessary 'stuff'. Maybe it's because people, particularly new car buyers, don't want to move 'things' from place to place these days. Maybe it's that the powers that be (UNECE, etc?) have standardised and regulated everything so tightly to deal with hypothetical 'safety issues' that matters of everyday practictality don't get a look in. Just look at the bloated new 'Mini' compared with the original, or the Fiat 500s for that matter.

My current car is a '96 VW Golf Estate that still runs and tows perfectly after 165k miles. It's getting a little tatty but a newer version comes with all sorts of junk like ESP, ABS,cruise control, batteries of sensors, warning lights and of course less load space. I don't want that, I just want simple and effective!

The Volvo was the estate of choice in that period for the reasons given, I also spent a lot of miles in a friends GT version that was better but as'buildingstoat' says, it didn't make me want to own one, my BIL has one that he purchased when his first finally went to that scrap heap in the sky, they do go on and his is a later version but still pretty basic re extras.

The eccentricities of the early DS models did put people of, the button brake pad as you say, but the later ones were more 'normal' and the CX I had was pretty normal though it did have the scroll speedometer that caused some raised eyebrows, I owned three Citroens with the hydraulic suspension, never gave any trouble and only one when starting to show a little wheel shudder had to have the spheres pumped up and that was not expensive.

The Citroens, for all their other faults were, and I believe still are, very comfortable. That's why I have a soft spot for them. Volvo's not so much, but the old station wagon concept, although a bugger to park in a tight space was always good value for money.