THE WEEKENDER: Sweet Charity... For Whom? by Wiggia

If there is a reset in the offing, let it be charities ! 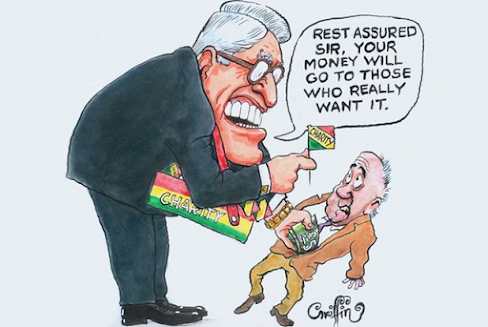 Advancing years mean different things to different people; items like wills need making or need re-writing according to circumstances.
Like many I would guess, I put off the inevitable because it brings home the prospect of the Grim Reaper hovering somewhere ever nearer. For most couples the family figures highest on the list of recipients of any wordly goods that might be left on departure, it makes a will relatively easy to configure; for us with no children it is a very different matter.
Ideally we would depart with nothing left in the kitty, a scenario that would give us much pleasure and deny the taxman and others grabbing what is left, but while simple on paper that is not as easy as it first appears; not knowing when the call will come makes that route nigh on impossible to plan, though one can have a good shot at it.
So apart from more distant relatives, nieces and nephews, all of whom seem well catered for by their own parents and therefore don’t need our help, and whom I don’t feel inclined to include anyway, to whom or what do we leave the remnants of our time on earth?
By coincidence the Times recently (26 April) had a very good article on the subject in which it explained how the richer parents keep their children at a higher level and those naturally further down the food chain get less by degrees from their parents, which keeps inequality as is or worse depending on earnings which for most have plateaued for the last 12 years. The winners are poor children with rich parents.
On the other hand those who make their own destiny stay the same. In our case we had only minimal bequests from both sets of parents for a variety of reasons, i.e. they had bugger-all to leave in real terms and we have made all we have on our own backs; that is not a virtuous boast, just a fact of life, but it does make you appreciate what you have and also more suspicious of where you intend to donate what you have left.
As Machiavelli said, 'A son can bear with equanimity the loss of his father, but the loss of his inheritance may drive him to despair,' which judging from the words I have heard from family members is not far from the truth.
Those items that you have no intention of gracing the spaces of the Sally Army furniture emporium with can be left to people who will appreciate them: art works, designer pieces etc, jewellery of any value can be turned into cash and spent; but after that it becomes more difficult.
The reason this matter has surfaced is because since we have just moved, some items have become surplus to requirements and it has made us review our wills as they too have come to light in going through all the paperwork we have transferred with everything else to the new abode and needs to be sorted and filed away.
The last will was decent enough in where and what we wanted to leave the bulk of possessions and property, but not any more, and this is where things have started to get bogged down. After much searching the last time we found some local charities, in particular a local hospice that did sterling work outside the usual business model of so many others, a genuine charity in a much-needed sector.
But - that word again - upon looking at their site recently and reading the FAQs it appears that within the last few years they have succumbed to the acceptance of government through council monies and now have a CEO  on an enhanced salary, so joining the bulk of charities where a business model and jobs in the revolving door public/private sector have become the norm. So, sadly, they will not be getting anything from me as through taxes I/we are already supporting the place and its enhanced salaries.
Obviously after we have gone any changes that a recipient makes is no longer any concern; all we want to do is to try and make sure any decisions are the right ones at this moment in time.

It is very difficult not to be a cynic when one is bombarded with television requests for £3 a month for everything from clean water to medicines to saving an endangered species. Sponsoring a snow leopard has to be one of the biggest cons in charity advertising, what with so few of them left, though at the moment I feel we are the endangered species; and all these requests come from international charities with huge reserves and CEOs on six figure salaries. I don’t need to go into the minutiae of how they operate and spend money; it has all been revealed many times in recent years and it paints a portrait of greed not charity.
Charities that work on the assumption that every pound given means they keep 90p to run the thing and pay employees are not charities, except for those that work for them.
The same outfits now regularly beseech one to include a legacy in a will and have employees trawling through estates to find legacies they have not been informed about. Have no doubt that they will find anything left to them and will often come knocking long before the estate is settled, as we experienced in a recent family legacy; as with certain family members, they have profiles matching vultures.
None of this helps us. We can’t even take advantage of the tax inheritance laws as we have no heirs; all we can do is try to make sure we spend as much as we can and leave the rest to carefully-vetted charities, local if possible; at least if you spread the residue over several charities, presuming you can find any, you at least have a fair chance of it doing some good.
It is sad it has come to this. Even some of the charities we took for granted as doing worthy things have become woke shadows of their former selves as they all make a beeline for the high salary business model. That old Victorian philanthropy has long gone, as with politics the 'putting back into society something for the general good’ and doing it for free has disappeared, along with most of the goodwill.
Of course current events - our government and the massive debt we have been put in - might well save me the trouble of where to put my money, it must just disappear to save the world.
Something will come up I am sure, but I never thought it would be so difficult to give away money, well in the way we want to, that is.
____________________________________________________________________
Sackerson adds: this article from 2015 underscores the problem...
One in five of the UK's biggest charities are 'spending less than half of their income on good causes' (and some spend as little as ONE PER CENT on charitable work)

The biggest offenders in the US are the various police 'charities', which are basically slush funds.

Or President Trump's charities, plus those of his children, which they have used as piggy banks to buy pictures and such for his country club.

People overlook locally run churches, they are a true charity that has worked for hundreds of years.

My grandmother belonged to a church that also managed a rest home. She spent her last 4 years in it before she died. They covered what my dad couldn't pay.

I spent some years as a voluntary secretary of a voluntary committee which raised about £500,000 p.a. for development work. I came to realize that the aid sector was a major growth injury and that many NGO employees earned considerably more than my clerical stipend.

I started raising money in the parish and sending it directly to a diocese in Africa, but even then there was a great deal of money misspent.

Finally, I settled upon a person to person approach. I give a hundred quid a month to an African agriculturalist working in poor rural communities. It subsidises him to continue working among poor villagers when he might have taken a lucrative post elsewhere