COLOUR SUPPLEMENT: Fencing By The Book Of Arithmetic, by JD 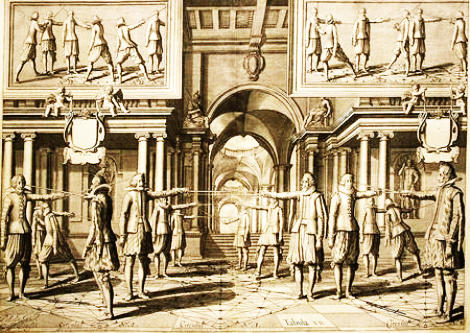 Romeo and Juliet | Act III, Scene I:
Mercutio and Tybalt engage in a sword fight which results in the death of the former. As is the way in drama, he has to make a little speech before he dies and he addresses Romeo thus:
"No, ’tis not so deep as a well, nor so wide as a church door; but ’tis enough, ’twill serve. Ask for me to-morrow, and you shall find me a grave man. I am peppered, I warrant, for this world. A plague o’ both your houses.
"Zounds, a dog, a rat, a mouse, a cat, to scratch a man to death! a braggart, a rogue, a villain, that fights by the book of arithmetic! Why the devil came you between us? I was hurt under your arm."
That is a very curious phrase “fights by the book of arithmetic”
What can it mean? Tybalt is a minor character (a cousin of Juliet) in the play and it looks like one of Shakespeare’s throwaway lines but closer examination reveals a whole story.
According to a book by Adolph L. Soens “Tybalt fights by a Spanish book of fence.”
Tybalt seems to be an anglicised version of the name Thibault and the character could be based on Gérard Thibault who was a Dutch fencing master.
Around 1605 Thibault was living in Sevilla and studied the style of swordsmanship of Jerónimo Sánchez de Carranza and Luis Pacheco de Narváez, two renowned masters of the art. Returning to the Netherlands, Thibault built on what he had learned in Spain and developed a new system, possibly after studying mathematics at Leiden university.
The result was the publication of his only book 'Academie de l’Espée' which was lavishly illustrated to show the style and system. 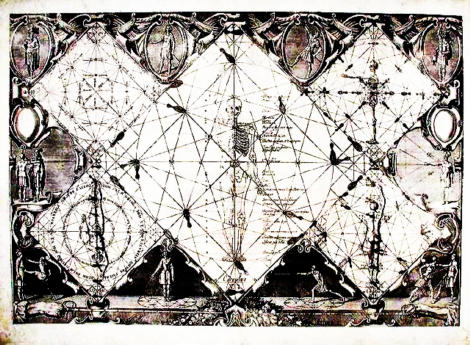 The book was published in 1630 after his death and also after the death of Shakespeare. Somehow the man from Stratford knew about Thibault’s style of fencing. At that time there would have been news pamphlets and manuscripts in circulation possibly with information on new ideas from around Europe. And it appears that Shakespeare understood Thibault’s style, or system.
Soens also suggests that there is enough information in the text to indicate how the fight between Mercutio and Tybalt should be staged. This probably had a great dramatic effect on the Elizabethan audience as they watched two contrasting styles in action with the unfamiliar one being the winner.
One wonders if Romeo also adopted Tybalt’s new style in their subsequent meeting, turning it to his advantage.
Four hundred years on and the Bard and his works continue to be a source of endless fascination.
Further thoughts on Tybalt/Thibault and his invention/adaptation of a new style of fencing can be found here and also here  - the entries at this latter link are in Spanish but it included this video which shows what appears to be a very slow and leisurely style of fencing:
We are used to seeing in 'action' films frantic and fast moving sword fights so one wonders if the real thing four hundred years ago really was as dramatic as the film industry would like us to believe or it was as depicted in the video.
You will notice on the back wall the name Luis Pacheco de Narváez, one of the fencing masters referred to by Thibault in his book.
-------
* An earlier version of this post originally appeared at Nourishing Obscurity on 18/11/2010; that original post has been lost in NO's technical problems.

Should of kicked him in the balls, or a headbut from the Glasgow school

Try holding a fairly heavy sword at arms length for a few minutes. Add adrenaline. Clearly, those fights could not last that long.