The Eyes Of Picasso, by JD

[This piece on Picasso and his vision first appeared on Nourishing Obscurity here.]

The picture shown at left was painted in 1895 when the artist was just fourteen, the same age as the young girl. It is one of the first paintings you see when you visit L’hôtel Salé in Paris.

Standing there and seeing this painting for the first time, I was immediately struck by the eyes. Large, round, black eyes with a compelling gaze out onto the world.

The artist was, of course, Pablo Ruiz Picasso; the man who dominated twentieth century art and those eyes became a recurring theme in his work over the next eighty years.

Whether consciously or unconsciously, Picasso seemed to know what power lay in the eyes.

And the eyes do have an unknown power, as Rupert Sheldrake asserts in his book The Sense Of Being Stared At.

Plato imagined light from a ball of fire emanating from the eye and combining with sunlight to hit the object seen and this is then reflected back to the eye.

Sheldrake and Plato are not the only ones to believe in the extramission theory of the eyes.

The eyes of that young girl are like Picasso’s own eyes with their mirada fuerte,nothing escapes those eyes and that gaze of Picasso’s seems to devour everything it lands upon.

Again and again, the eyes are the main point of interest in his paintings regardless of the style he uses (or invents) We see it here in the two central figures in Les Demoiselles d’Avignon, one of his most celebrated works. 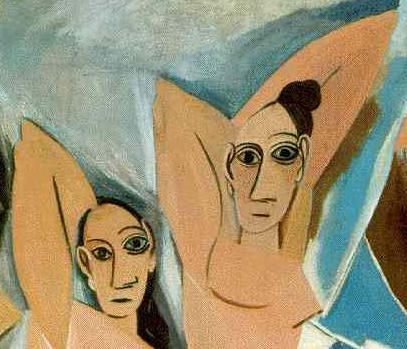 In a completely different style, executed in charcoal (with collage) the eyes are once more the focus in this picture of his then wife Jacqueline Roque. 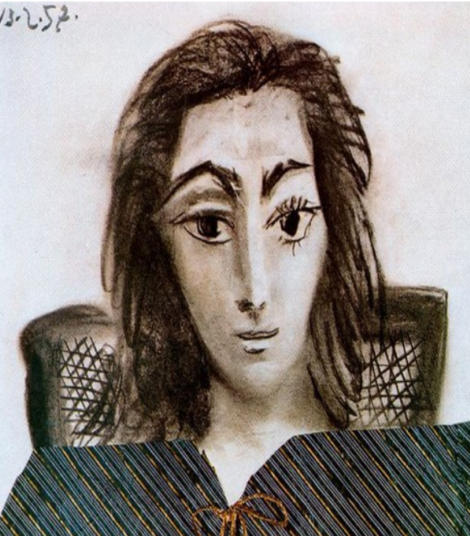 In this, lesser known, work we can see the wide-eyed excitement of a child taking its first steps. This is a wonderful painting in other ways; the overarching protectiveness of the mother and the delicacy of her touch as she guides the child without grasping too tightly. 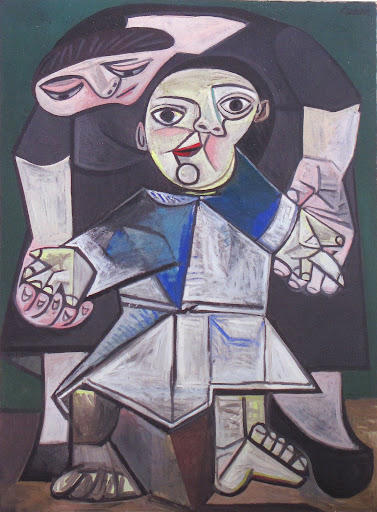 And in his final self-portrait we have an old man, shrunken of skull but still those eyes dominate the picture, staring into the undiscovere’d country, from whose bourn no traveller returns – 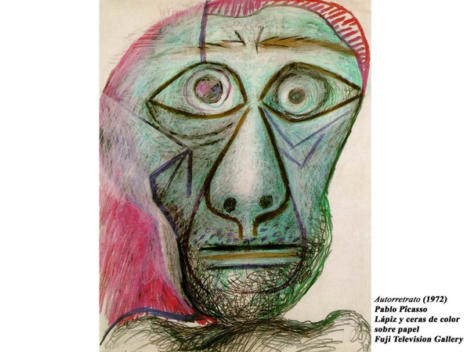 When Picasso died in 1973 it was as if a line had been drawn under the visual arts with the implicit message- follow that!

And we have been unable to do so. Over the subsequent four decades the art world has been floundering, looking for the next big thing and finding nothing of substance.

Painting has more or less disappeared and the visual arts have degenerated into infantilism and ineptitude. Words have now replaced images in that every ‘artist’ must now have an Artist’s Statement (full of meaningless platitudes) or, even worse, a manifesto! and the artworks themselves are often covered in writing. Everything now needs to be explained as if we had lost the ability to see or, more likely, artists can no longer make the invisible visible.

It seems appropriate somehow that history’s greatest painter should be the one to bring an end to the visual arts. And for those who cannot accept such an assertion, I say only – open your eyes/mind and look! Or in the words of J. Winston Lennon –

Living is easy with eyes closed, misunderstanding all you see.

The last word must go to Sir Roland Penrose; from his biography of Picasso:

The virtue common to all great painters is that they teach us to see, but few have had a more compelling way of doing so than Picasso. His power has enchanted those who are susceptible and enraged those who resent being disturbed by his brilliance. Art itself should teach us to free ourselves from the rules of art, and this is precisely what the art of Picasso has done.

There is also reason to be grateful for the violence that he has used, for in our time, when signs of apathy and despair are easy to detect, it is only a resounding and decisive passion that can succeed. As he himself has said: “The essential in this time of moral poverty is to create enthusiasm.” Without the awakening of ardent love, no life and therefore no art has any meaning.

After watching Picasso's last Stand on TV the other night https://www.bbc.co.uk/programmes/b09xptbr  I thought the overall message of the programme was a reinforcement of that last line I quoted from Sir Roland Penrose's biography:

" Without the awakening of ardent love, no life and therefore no art has any meaning."

I have seen a few of the paintings shown in the programme, the ones in the Picasso Museum in Paris and they are indeed 'passionate' paintings, vibrant and 'full of meaning'.

I have seen a lot of his paintings over the years and always there is the sense that they are somehow alive, their 'presence' can be felt in the galleries. (Rembrandt's paintings have that same quality.) Not all of his work has that vitality. I have always thought that Guernica was a flat and lifeless painting; when he does a 'political' painting it is nothing more than a gesture, his heart is not really in it which reflects that quotation above.


As I wrote in the original post "When Picasso died in 1973 it was as if a line had been drawn under the visual arts with the implicit message- follow that!"  ... and we have not and we cannot follow that!

JD: "...that gaze of Picasso’s seems to devour everything it lands upon."
Yes indeed. Those are classic Scorpio penetrating eyes. Picasso had Sun and Mercury in Scorpio. There's a lot more to his chart besides Scorpio of course, but the eyes have it!

That would be an interesting horoscope to do, if one could suspend one's knowledge of the actual outcome...

I was taken in the early 80s to a private Piccaso museum in Switzerland by my brother who is an artist and designer and lives in Switzerland.
He explained much about the paintings the concept behind them , the way they were painted etc, it was an illuminating afternoon.
But what was alsoexplained was the phenominal output fro Picasso, an output that increased as he approached his final years, it was as though he had so much more to say through art and simply ran out of time.
Forgive me for forgetting the name of the painting in that museum, but my brother took me to various points in the room and the eyes never left you wherever you stood.