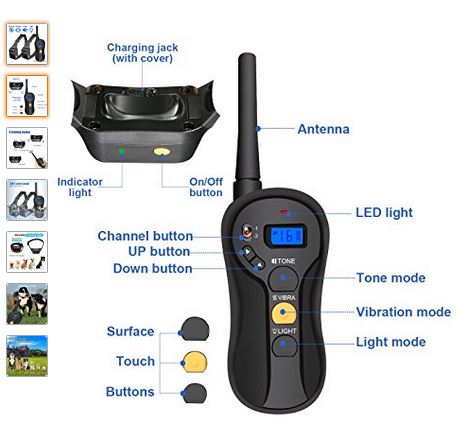 I came across this article from the Countryside Alliance the other day, in itself not exactly prime cause for concern for the average voter, yet as the article says, it has crept in under the radar along with other animal welfare issues pushed by the animal charities with no doubt PETA  leading the way.

The concern over this by the Alliance is justified as explained, for it reaches further than electric dog collars and will mean the end of electric compounds regularly used for small mobile enclosures to ensure horses and cattle do not stray into what could be dangerous areas.

Electric collars have a battery in the collar activated by a remote control, NOT a lead plugged into the mains! The animal rights groups will howl in protest; I must make it clear that I do not advocate the general use of these collars - they should be available for a few specific situations.

I have a little knowledge of this as when I was training dogs for competition during the seventies and eighties I was also chairman of the committee in the Kennel Club that was responsible for competitive obedience competitions and was there when this item first surfaced.

The collar in question was an American import and, along with another totally cruel collar - the inward choke collar that had blunted barbs that opened inwards when the choke was pulled - was rightfully condemned. Well the latter was and very little was heard about them afterwards.

But of course the KC is not a law maker except within its own boundaries so as the government did nothing about the collars and they remained on sale.

The latest chapter in this has been instigated by animal charities as the usage of electric collars has become more widespread and once the charities have made the right noises in the press all “God fearing politicians” jump on the bandwagon without further thought and shout barbaric, cruel, etc etc probably in the hope that some old pensioner who votes Labour and owns a guinea pig will change sides after hearing how caring the incumbents are.

The fact is that in certain cases the electric collar has a place. Anyone who has owned dogs will know that there are circumstances where a dog however well trained can override that training with a base instinct that will ignore commands and if the dog is away from you off lead you have a problem. Naturally if the dog has a propensity to repeat such moves then he should be on lead as much as possible.

In cases where sheep worrying can occur there is a big problem and the electric collar can quite simply save lives and stop the aggression before it happens. I know, because I have seen and spoken to sheep dog handlers, there is a fine line between being a great sheep dog and a sheep worrier: the dog has to have enough ‘bottle’ to face down troublesome sheep but not to harm them. Yet I have seen some of the best dogs at trials actually lose it and attack the sheep; they were ordered off and did so.

The likelihood of the aggressive family pet being ordered off is virtually nil if he has the bit between his teeth, and the electric collar has in those instances a role to play as there is no other way at distance to get the dog to desist, which is why the collar was invented in the first place.

The alternative remedy is twofold: if your dog worries sheep or cattle then the farmer has every right to shoot it' in a domestic environment, if a dog shows aggression towards family members, the collar has limited use because of close proximity and if a dog does not respond to training should if the owner is right minded be put down - the risk is not worth it, and re-homing simply shifts the problem to someone else.

I must admit when this matter came up I had no idea how easy it was to get one of these collars. I have been out of the loop for some time, but there they are on Amazon and elsewhere. The downside of them is that in the general public's hands they are simply another way of training a dog rather than a remedy for a specific problem and there lies the rub: used as a method of general dog training they are a crude and potentially damaging training aid rather than a deterrent in a one-off situation, so legislation will cure one problem but will also prohibit the real reason for these collars' usage.

It appears since starting this piece that the government is having second thought on any ban as the implications re electric fencing cannot be resolved so easily; we shall see.

Of course the government could do something more useful regarding dogs and implement the Dangerous Dogs Act properly. The rash of ridiculous chav breeds that can cause and do cause damage to the person has reached epidemic proportions in some neighborhoods. Why anyone would want to risk the lives of family members never mind anyone else by having one of these breeds in the house simply so they look “right hard” is beyond me, but then so much of the modern world is now.

Amazingly, the prong dog choke collar is still available on Amazon and eBay ! 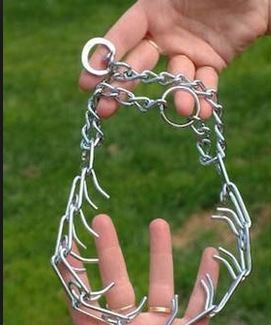 I have an over-reactive Alsatian, one year old, who barks a lunges at other dogs.
I am working with him, but am debating using a shock collar.