WEEKENDER: An age of style, by Wiggia

I was rifling through a pile of old gardening books looking for inspiration when one of my favourite tomes came to the surface, Gertrude Jekyll and the Country House Garden and soon became engrossed in that Edwardian age of style, both from the point of view of house and garden. It was also a reminder that with another 800 house estate being approved nearby we are losing both style and space in increasing amounts; what constitute a home these days is little more than the old terraces provided in Victorian times.

The book is assembled from the archives of Country Life magazine, the choice of dentists waiting rooms or was. It is as much about Gertrude Jekyll’s association with Edwin Lutyens as it is about gardens: his houses compliment her gardens and vice versa. It is hard to envisage such glorious abodes and surrounds these days. Miss Jekyll's own house Munstead Wood was designed by Lutyens and was described by her a small house with plenty of room?
The house was built on 15 acres of land adjoining her parents' home which they purchased for her, though small is not a word one would use to describe it today. It was large and expensive to build: £4000 in 1897, that equates to around £365,000 in today's money, for a large country house in fifteen acres near Godalming, Surrey that would buy today a one-bedroomed flat. Land and labour were cheap then and even Lutyens being the architect was included in the price, see below what that price gained you in 1897 and weep.
This is the courtyard aspect; it is much bigger from the front, but this is the most appealing side to the house: 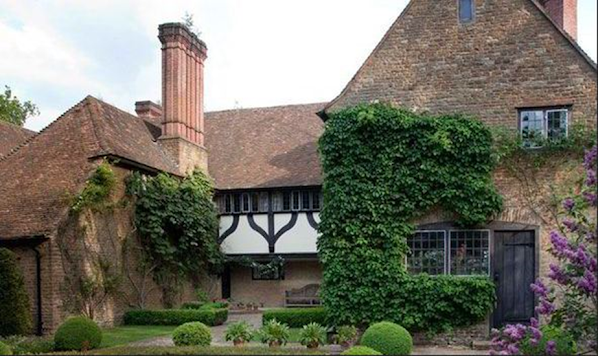 And below is the Wood Hut in which she lived whilst the house was being built. That is also still there, it all gives an insight into the type of living for the few during that elegant age.
It would be easy to fill pages with pictures of Mr Lutyens' glorious country homes, most in the arts and crafts style. All had or used local stone brick and wood as part of the brief and all were harmonious with the surroundings and Miss Jekyll's inspired plantings. Lutyens himself laid out many of the garden designs and Gertrude filled in the planting areas with her plant layouts.
Her palettes of colour are still used in today's designs or adaptations to the modern versions that account for restrictions on size, as very few today can accommodate four-hundred-foot flower borders, as she herself had at Munstead Wood. Her use of grey leafed plants was not something of the age but later designers have used that part of her planning in increasing amounts.
This example is at Hestercombe in Somerset, a garden that was considered to be the pinnacle of Lutyens layouts with wonderful long pergolas and rills; the planting by Jekyll was the perfect complement: 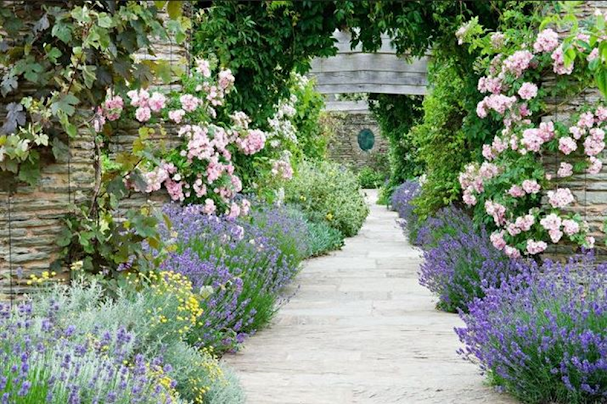 Gertrude Jekyll was very late to garden design design and plants. She had grown up a mainly solitary child with two brothers away at school and an elder sister who married and lived in Venice. Her desire was to be a painter and inspired by Ruskin and Turner she she went to art school in South Kensington, the use of colour was to come to good effect when she started to plan garden layouts.
She was also very interested in the crafts and did more than just paint on her travels to Europe, Algeria and the Levant. She produced embroidery metal objects, carving, gilding and photography all of which stimulated her later colour and design in gardens.
A couple of small designs for friends were followed by designing the garden for her parents at Munstead House; it was here that she learnt her craft, admitting to mistakes that would stand her in good stead when she moved next door and designed her own garden.
Even at this stage she suffered from poor eyesight, something that would blight her later years but it never stopped her working. After Munstead Wood her long association with Lutyens would produce a hundred gardens and four hundred in total over the course of her life. As well as designing she wrote profusely for Country Life and other publications to the total of over a thousand articles, not all gardening but including the arts and crafts she was so fond of, and managed to write fifteen gardening books as well as running a nursery later at Munstead Wood. Even at the age of 86 just two years before her death and nearly blind she wrote 43 articles for Garden Illustrated in the one year.
The Lutyens association was one of those that defy the usual norms. Both just seemed to work together as though it was a single business and it produced some of the most sumptuous buildings and gardens of any era.
Lutyens' work extended beyond the country house and the Arts and Crafts style, and included many memorials including the one everyone knows, the Cenotaph. The list below gives many of his works here and abroad, but there are many others, some now no longer standing.
By coincidence Lutyens studied architecture at the  very same South Kensington School of Art that Jekyll attended and they met only a few years after he started practice. As an aside he designed several buildings for the then Midland Bank for whom my wife worked; she always remembers going to head office in Poultry in the city of London and describing the amazing interior; it survives as a Hotel.
Some photos here of before and after its conversion.
https://www.dailymail.co.uk/travel/travel_news/article-5961625/What-Londons-Midland-Bank-HQ-looked-like-hotel-makeover.html
Plumpton Place in East Sussex is a building that has origins from 1568. The Jekyll-Lutyens association was to restore and rebuild the house and gardens, which had fallen into disrepair, after their purchase by the founder of Country Life, Edward Hudson. This was no mean undertaking as the old moated property needed substantial works. Lutyens rebuilt with taste and added some other buildings and additions; Jekyll had the 60 acres of gardens and lakes to attend to.
Jekyll was eighty-five by the time this project came along and her eyesight was so bad it was a miracle she could work with the information forwarded and come up with planting suggestions in such detail and at such short notice. When all the detailed plans were in Hudson asked for all the plants suggested to be delivered including a few thousand columbines and two thousand of a particular Iris; this was planting on the grand scale, not something seen very often these days in the private sector.
The property went through several ownerships subsequently and was the interest of George Harrison and Patti Boyd but the owner refused to sell to them. A few years later it was sold to one Jimmy Page of Led Zeppelin fame who lived there till 1980 - the double height music room would have appealed: 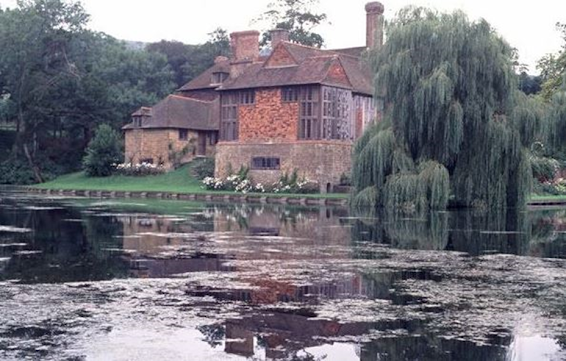 Several of the houses and gardens during this long collaboration became almost a template for the age. Lutyens moved on from the Arts and Crafts architecture of the period, but Jekyll’s designs continued. Later the style became less popular and many of the gardens were lost forever, including her own at Munstead Wood - she never made any arrangements for it to be continued after her death, believing gardens are a transient thing, but in the end her means to look after the house and gardens had dwindled after the Great War and she could not afford the staff to maintain it all and it became overgrown and the house no longer was updated.
Fortunately the garden survives in a smaller form; the rest including the Hut was sold off in parcels so it is all there but not whole.
Her style as I said became an anachronism, yet it remains one of the most important periods of garden design and planting; the colour palettes are still used by a majority of garden designers and her grey themes are very much in vogue again.
Visiting Lutyens properties is not that difficult but few are open to the public: the Lutyens Trust lists those that are, others are occasionally open under local charity status; and Jekyll's gardens are in a similar status including Munstead Wood.
https://www.lutyenstrust.org.uk/about-lutyens/visiting-lutyens/lutyens-houses-gardens-open-to-the-public/
https://www.lutyenstrust.org.uk/about-lutyens/visiting-lutyens/gertrude-jekyll-garden-openings/
There are a few Youtube videos showing gardens by Jekyll and the houses of Lutyens; not all the gardens are as they were, but they give a fair picture of the original schemes.
Munstead Wood:
Le Bois des Moutiers - this French property was redesigned by Lutyens and Jekyll designed the gardens, a rare venture outside the UK:
Vann, in Surrey:
Hestercombe, Somerset:
Lindisfarne:
And a short BBC Teach about Jekyll:

The video of Gertrude and her shortsightedness resonates with me. I have been shortsighted since I was child and without out vision correction I can only see things clearly if they are placed very near to my face. This for me brings a whole new concept for her designs. I know how they would appear to her and that is quite different to non impaired vision. The Turner painting illustrates the difference perfectly.