Equitable Life: climbing back up?

Equitable Life, the British mutual insurance company that burned its fingers very badly by offering high guaranteed annuity rates (in the period 1956 - 1988) as a marketing incentive to prospective pension investors, has announced a deal that will help it off the hook.

Canada Life will be offering annuities for maturing EL pensions in future (though EL will remind customers that they have the open market option also). This follows the 2006 deal in which Canada Life took over £4.6 billion-worth of existing EL annuity business.

It's not clear what Canada Life has paid or will pay EL for this linkup, or how.

EL's "intention is to stop writing Equitable Life annuities where possible" (PDF). Over time this arrangement will further reduce EL's outstanding annuity commitments and some of the freed capital is to be used to increase payouts by 12.5% on maturities and transfers.

DISCLAIMER: Nothing here should be taken as personal advice, financial or otherwise. No liability is accepted for third-party content.
No comments: 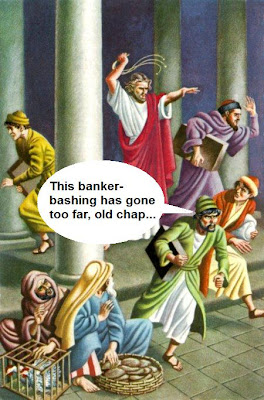 Leave those poor bankers alone; haven't they suffered enough? Harry Mount seems to think so, at any rate: those oiks fair spoiled the view, so they did.

Of course, the modern thing is for the bankers to scourge the protestors. And since they're on the Board controlling St Paul's, they can. And a jolly good thing, too.
2 comments:

The news media: the cock crows on the dunghill 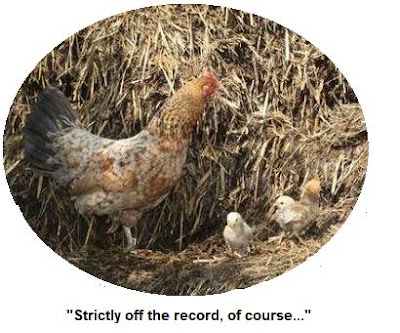 I think it was William Morris who said that the first step in literacy was being able to read a newspaper, and the second was not to read one.

Liz Jones gives cause why in the Mail on Sunday: fashion "journalists" at London Fashion Week are given seats of honour, or pent-up "some several hundred feet above the action", according to their willingness to toady; but a vengeful article by the victim gets results: "I was couriered a fabulous gift of perfume, shower gel, body lotion and chocolates (vegan, hopefully), and a handwritten note from Stella herself. Was this an apology? Or a bribe so I would play nicely next time?" (Both, obviously.) Sir Philip Greed gives her a light touch of the whip, saying he would have sent her a lovely olive coat for her review of TopShop - until he read the last para. Designer houses mark coverage by the glossies on a points system - nil for blacks and fatties - and so on, in a litany of bribery, schmoozing, banning and sacking. I think Jones is one to watch: when she finally tears her gaze away from her navel in the back pages of You magazine (there is a hopeful reticence about her human relationships this week), she might yet prove a Samson and bring the whole unholy edifice crashing down.

Meanwhile, Toby Young has taken the Murdoch shilling - as he boasts in the Spectator - and dutifully produced some wallpaperese in the new Sun on Sunday. His bet's on education sec Gove for PM, the free-schooler opines, entirely without any consideration of how (one of) his interests might in any way be congruent with Gove's (or Rupe's). Like so many of our modern celebs, Young has recognized the power of brazenness, adopting "@toadmeister" as his Twitter ID. And like former transport minister Stephen Byers, he's a "bit like a sort of cab for hire", only it's more acceptable in journalism, or so he seems to think: "(Go on Private Eye, stick me in Order of the Brown Nose. See if I care)", sez 'e in the Speccie, a magazine I now read principally because of Jeremy Clarke's luminous column (shame they let go Christopher Fildes and Mark Steyn, among other talent).

Young's is the authentic voice of the new Fourth Estate establishment: offensively triumphalist. Like the bankers who've ruined us, the yacht-visiting politicians who've sold us out, the rich who've looted us. These have learned how to manage news and opinion: dining with, leaking to, treating, flattering and employing the writers who (like the ancient bards) can foster or wither reputation. By and large, the newshounds have been luxuriously tamed, their necks enclosed in velvet collars with silver chains. There are exceptions, like Peter Hitchens, serving but to prove the rule; as "Anastasia" in his latest piece on Russia says, "The only rational conclusion is despair."
4 comments:

It seems that we have to take into account the difference between bonds issued under Greek law and those issued under don-domestic law. One of the technical points is whether all holders of the debt have to agree to a new deal, and whether or not a minority can hold the majority to ransom by refusing to agree.

If, in desperation, Greece is driven to outright default whatever its creditors might think, this tears up the rule book and anything could happen. Other European nations are also severely distressed by debt and might try to follow suit. The very rule of international law would be challenged.

But there is an angle that Durden has not explored in his essay: the principle of "odious debt". There is precedent for a country repudiating damaging obligations, e.g. Mexico after the fall of the Emperor Maximilian, and the USA itself in relation to Cuban debt incurred under the previous Spanish regime.

Could Greeks be justified in arguing that bailouts imposed by their new, undemocratic government are not binding on the people? Could this argument also apply to debts incurred previously, directly and indirectly and consequently, in the process of acquiring EU membership, which it now transpires was based on fraud, assisted by bent accounting by Goldman Sachs and quite possibly connived at by the other EU states?

DISCLAIMER: Nothing here should be taken as personal advice, financial or otherwise. No liability is accepted for third-party content.
No comments:

The sound of Sunday 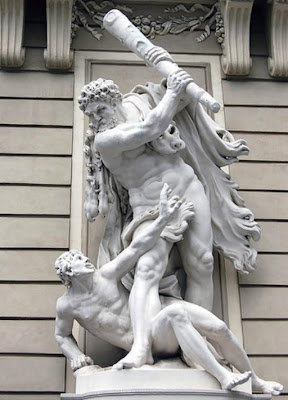 Hercules slaying Augeas for non-payment of debt - the promised fee for cleaning the Augean stables. The statue, by Lorenzo Mattielli, stands outside the Hofburg Palace in Vienna.

At least Hercules had an excuse, having done some honest work, though to my eyes this particular depiction makes him seem simply a violent fat thug. What, by contrast, have the EU, international banking and the lucrative intermediation of Goldman Sachs done for Greece, aside from shoehorn the country into a club it should never have been allowed to join?

Euro MP and UKIP leader Nigel Farage has just told it straight yet again, to a parliament in which notable figures pointedly chat to each other while he berates them: the EU has driven poor Hellas to desperation and worse is to follow.

This chaos was foreseeable; my wife and I were in Corfu in May 2010 - the month in which three innocent Athenian bank employees were burned to death - and the goldsmith at Roda told us there would be a revolution within a year. Now, a whole government has been removed by outsiders and democracy is, apparently, merely an optional extra for peripheral nations.

Anyone who know the Greeks knows they have a historical memory like the Irish. This will go deep and will not be forgiven.
5 comments: 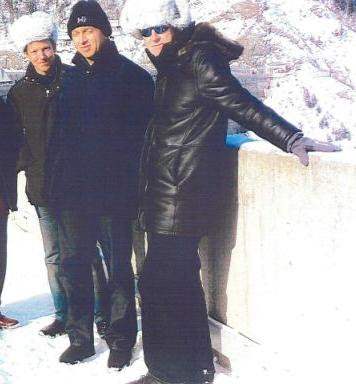 The Daily Mail reports its libel victory over the Lizard People. But looking at them, why are our politicians and financiers so unimpressive?

There is Oleg Deripaska, reminiscent of a toxic marmot, flanked (left) by millionaire Nat Rothschild looking like one of the people who stand behind John McCririck on Channel 4 Racing and seemingly nerving himself up to raise his thumb at the camera, and (right) by Peter Mandelson, rigidly relaxed and posing as a wannabe extra for a Blue Oyster club scene from "Police Academy".

If you must be star-struck, boys, at least don't worship a dark star.

I'm holding out for the Hollywood version, it'll be so much more credible. To quote Sir Philip Sidney, these people's "world is brazen, the poets only [i.e. only artists] deliver a golden".

Data gets turned to the commentator's angle on it. Discussion of debt too often focuses on what government owes and ignores private liabilities, hence the crisis (which most professional economists failed to anticipate) that faces us now.

In its turn, debt is only a part of the picture. Watching the Greek economy implode, it's easy to run around panicking like Chicken Little about our own situation.

So let's look at the net international investment position of the PIIGS, USA and UK to see the problem through a wider-angle lens: 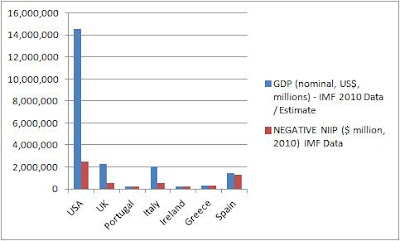 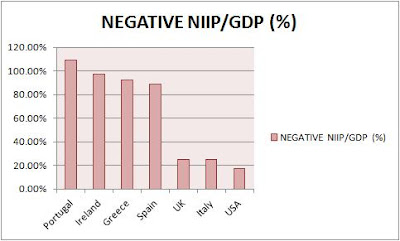 Yes, even in this wider definition of net obligations, we're all debtors; but the ratio of debt to GDP varies greatly, and if there is to be a domino effect, remember that one of the dominoes in the top graph is more like a skyscraper and much less easy to tip over.

Everything that makes up the above data is subject to change: what will bonds and equities be worth next year? How much could GDP change? How is the structure of the largest economies different from that of the small ones? Are we comparing whales and jellyfish?

And how much could the big help out the small? I'm reminded of the story of two men at their place of worship, praying for cash to get them out of a jam. "I need fifty thousand, Lord, or I'm going to lose this deal," begs a blue-suit, but keeps being interrupted by his ill-dressed neighbour calling "A hundred, Lord, a hundred for my family's rent and food". Finally, the businessman reaches into his pocket, pulls out $100 and gives it to the other, saying "Here, now shut up, he's listening to me."

DISCLAIMER: Nothing here should be taken as personal advice, financial or otherwise. No liability is accepted for third-party content.
2 comments:

UK back into slump

Since my previous post, the UK M4 bank lending figures in the quarter to end December have finally come in: negative 6.7% annualised, following on from negative 8.7% ending September. 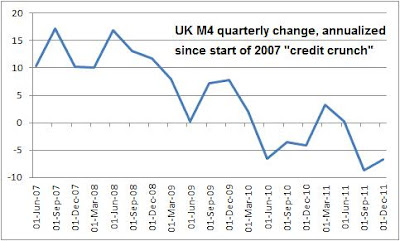 That's 5 negative quarters out of the last 7 - the five lowest (and the only five negatives) since 1963.
This thing isn't over, and the air of normality and control is, I fear, fake.
INVESTMENT DISCLOSURE: None. Still in cash (and index-linked National Savings Certificates), and missing all those day-trading opportunities.

DISCLAIMER: Nothing here should be taken as personal advice, financial or otherwise. No liability is accepted for third-party content.
5 comments: