Last Friday (the 13th!) I was checking emails and then browsing for more music videos and I felt something on my head. Put my hand there and it was blood, lots of it. What the .....

I grabbed a small hand towel which very quickly turned red. I realised that I must have had another epileptic seizure, first for ten years, because there had been a momentary very intense 'aura' surrounding the screen and a blurring of vision. I had fallen off my chair, banged my head on something and then got back onto my chair without any memory recall of what happened. That pattern has happened before where I had a blip in my vision similar to seeing a film projector jump a frame in the reel.

So I dialled 999 and called for an ambulance after explaining the situation and two paramedics arrived within about twenty/thirty minutes. They went to a house further up the street but I was by then sitting at my open front door and I went out and waved them back down the street. They patched me up as best they could and loaded me up into the ambulance. They had a quick word with my neighbour who had just then got back from work and away we went with siren blaring and they delivered me to Cramlington Emergency care hospital. Meanwhile I'm lying there trying to work out what had happened.

They wheeled me into the 'arrivals lounge' which is just a long row of curtained off beds, a bit like a field hospital. Doctor arrived and started to assess the damage and eventually I ended up with ten stitches in my scalp. Must have been a hell of a clout to leave such a deep and extensive wound (but more of that later)

Waited for a while longer and then they moved me onto a ward, told me not to move or try to get up. They checked my BP which was dangerously low and eased me onto a waiting bed then threw a pair of NHS 'luxury' pyjamas which turned out to be 'one size fits all' in style. Almost wearing these ill fitting garments I lay on the bed while a nurse put my bloody (literally) pullover and shirt into a bag. 'Bloody' trousers and not so bloody underwear were on a chair in the bath/WC. 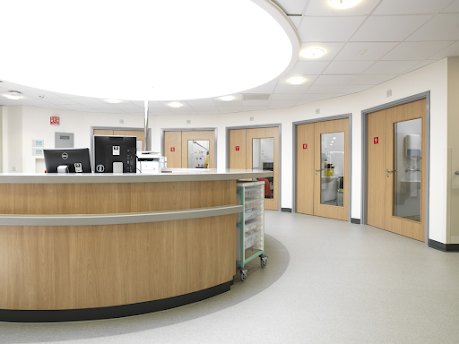 The style at Cramlington is a circle of individual rooms radiating from the central nurses desk area. They brought some food and the essential cuppa char and then checked my BP again which was too high this time and then the usual fussing about and sundry poking and examining etc and I just lay there and waited. Not much else happened, nothing of importance that I remember anyway. Around 3 in the morning nurse wheeled in the BP machine and it was 124/77 which is good. All subsequent BP measures were in a similar range so perhaps my BP problem has been resolved accidentally. Well, you never know!

Saturday morning and weetabix for breakfast. Where's the all-day-breakfast? That comes at lunchtime. Well it's obvious innit. They wheeled me around for a CT scan of my brain and later another room another machine for a chest X-ray. And then more waiting around lying on the bed and talking to the various nurses who wandered in and out to do whatever they were doing. Eventually a proper consultant arrived and he turned out to be better than average simply because he was willing to say "I don't know." which was one of the three options for what had happened to me; the other two being the epileptic seizure and a diabetes related episode. Finger prick for diabetes being one of the tests the nurses were doing.

And then they signed all the bits of paper for my discharge. While I was sitting waiting for one of the nurses to put a fresh dressing on the head wound I was idly peeling away the tapes around the cannula on my hand which had not been necessary but they do it as a matter of routine. I had managed to extract the valve and the needle without doing any damage to the skin or hand just as a nurse came in to do it. She told me off and said something about germs as she put a plaster on. Oh, I've met lots of germs in my life the only germ that worries me now is this one -

And the into an ambulance home wearing my bloody trousers and the jacket of the bile green NHS pyjamas, carrying the bloody pullover and shirt in a bag. And back in time for the end of the Cup Final which was as bad as my sore head.

I think I've worked out what happened. Looking at the mess on the floor which now resembles a Jackson Pollock painting, I must have fallen off the chair and cracked my head on the radiator, ending up lying on the floor. That would explain why the backs of my pullover and shirt were soaked in blood and the front was splattered with blood dripping from the wound. I cannot remember falling or getting back up. My auto-pilot, the subconscious part of the brain which controls the functioning of everything in the body, took over and restored me to the last known conscious position before switching me back on. That is my understanding of it and is the best way I can explain it. If anyone has some other way to describe it I would be glad to hear it.

That was very strange sensation and explains how I didn't realise anything had happened until I felt that trickle of blood from the wound. The more I think about the auto-pilot function and how it works the more I realise that those who advocate the fusion of man and computer, the transhumanists, are insane. They haven't the faintest idea of what they are dealing with. The brain is not a computer, in fact it is nothing like a computer or any other mechanical device. I have learned a little bit from my experience with epilepsy; enough to know that I haven't the faintest idea of what goes on inside my head or anybody else's head! And neither does anyone else.

So it must have been an almighty blow on the head which is why they kept me in hospital and why the nurses were so keen to monitor my movements to the toilet and back.

The nurses were very good and there seemed to be a lot of them. One of the more senior nurse offered to take a photo of my wound as a souvenir; cheeky monkey! I talked to her quite a lot and I directed her to visit Broad Oak Magazine where she would find lots of wonderful posts. And during my brief stay I picked up a 'vibe' of exasperation with the management and stupid systems of the NHS. Just a few comments now and then which I overheard. It is the nurses who keep it running, the management is an impediment.

I rang my GP Monday morning to arrange for a nurse to call and inspect and clean up the wound, there had been a bit of leakage with a trickle of blood onto my scalp. A nurse arrived about twenty minutes after I had phoned. She said she had been doing her rounds and received a text message or something and she added me to her list. She cleaned the wound and changed the dressing and arranged to return the following monday.

When I read some of the tales about the NHS and people's experiences it can be alarming even frightening at times. I have had my own bad experiences to add to the list. But at the moment I seem to be blessed with the prompt arrival of the ambulance on friday and with a very good GP, having ditched the previous GP two or three years ago, plus a day visit to the local hospital recently has shown it to be much improved since I was last there about ten years ago. The previous GP once told me that the NHS has many problems but money is not one of them. A guarded reference to the NHS management, obviously. We deserve better.

Yowza! I've never heard of anything like that before. I bet it really smarts a bit. Glad you're ok :-)