Before implementing solutions to a problem, it is wise to understand what the issues are.
In 1957, our government and business leaders began to recognize that high-level Science and Technology were essential to our economy and national security, requiring a large number of people trained in Mathematics, the language of Science. It also became apparent, and more so over the next 60 years, that the performance of US students in the subject averaged mediocre at best, when compared with other industrialized nations.
The conclusion that the experts came to was that there was too much rote memorization in US education, and not enough understanding. Interestingly, the many groups of Mathematics education reformers rarely include actual mathematicians. When they do, it is most often ones whose work does not require the use of tools such as the Calculus and Trigonometry.
The implemented solution was the 'New Math', and was a disaster, in large part because the teachers didn't understand what they were doing.
Later, when the situation stubbornly refused to improve, the new reformers introduced ideas such as 'lean and lively' Calculus (i.e. teach less) and taught students to use calculators and computer systems to do the rote calculations.
The end result has been that the percentage of students who have learnt the bare required facts and can do the basic computations has shrunk. Of the remainder, many have decayed their skills so far that they cannot correctly input expressions to their computing devices, and cannot understand the resulting outputs. God forbid if you ask them to do anything with fractions or percentages.
The underlying problem was that the 'expert' reformers did not understand that Mathematics is both a language and a mode of thinking. Except for the savants, its learning requires repetition of operations, by hand. After all, we don't expect people to learn instruments by listening to music, do we?
In years past, I had classes prepare a study sheet for first semester Calculus. Most could fit every definition, theorem and rule required on less than one sheet of paper. For how many subjects could one say that?
However, when I awarded 20% of the grade on the final (announced beforehand) to reproduce 3-4 of the definitions and statements of theorems, no more than 1 in 20 of the students could get them correct.
So much for 'rote learning'.
2 comments:

Part Two moves eastwards and further away from the 'traditional' carols and closer to the reason for this celebration.

The fourth video may not be strictly correct (Christmas Eve would normally be compline and not vespers) but the lead singer here has a fabulous voice.

"The "Huron Carol" (or "Twas in the Moon of Wintertime") is a Canadian Christmas hymn (Canada's oldest Christmas song), written probably in 1642 by Jean de Brébeuf, a Jesuit missionary at Sainte-Marie among the Hurons in Canada.
Brébeuf wrote the lyrics in the native language of the Huron/Wendat people; the song's original Huron title is "Jesous Ahatonhia" ("Jesus, he is born")."
https://en.wikipedia.org/wiki/Huron_Carol
This version is by Loreena McKennitt who is a Canadian singer-songwriter, multi-instrumentalist, and composer who writes, records, and performs world music with Celtic and Middle Eastern influences. McKennitt is known for her refined and clear soprano vocals. https://en.wikipedia.org/wiki/Loreena_McKennitt

Marketing is self-serving BS, by Paddington

For many years, I have wondered about the efficacy of advertising.

Then, I listened to a couple of the 'Freakonomics' podcasts, where they discussed experiments and statistical studies on this very subject. Those studies, and the reaction to them, are very interesting.
If advertising is actually effective, it appears to be only one-tenth as effective as is generally believed by those in the trade. However, the people in marketing in large companies, and those who sell them advertising, just 'know' that it works. They just can't explain how it works, nor provide any unequivocal data to support their conclusion. However, they maintain their cushy jobs on the backs of those beliefs.
One of the knock-on effects of this belief is that Marketing faculty at universities earn 1.5 to 2 times what Mathematicians and Engineers do, because 'everyone knows' how effective they are.
As I have said before, we are the nation of con men and used car salesmen.
1 comment:

A bit of calming music as a blessed relief from the madness of the world. The first video was attributed to Frédéric Chopin but was in fact composed by Paul de Senneville under the name "Mariage d'Amour".
https://www.britannica.com/biography/Frederic-Chopin

US college math: If at first you don't succeed... by Paddington

There is current news on the intent of the state legislature to take over the State Board of Education, and the articles on the subject include a discussion of the 2021 Ohio Remediation Report. That report states that the percentage of students going to higher education and requiring remediation in Mathematics and/or English is declining.

Most of that gain appears to have been achieved by changing definitions.

When I started teaching Mathematics at the University of Akron in 1978, approximately 80% of the incoming students had not mastered Algebra I enough to pass a placement test into a college-level Mathematics course.

That 80% figure was national, often quoted as 'only 15% of 12th grade students were ready for a college-level Math course' (The difference in percentages was due to those students who didn't go to higher education).

When I retired in 2017, that 80% figure had not changed, despite the addition of lots of technology, and rounds of 'innovation' from Colleges of Education.

So, universities and colleges around the country were under pressure to 'fix the problem', and responded by generating courses which were not actually college-level, simply eliminating the requirement for a Math course, or re-defining what a Math course was. Others, such as the University of California system, have tried to hide the problem by 'just in time' remediation, which works about as well as one would expect.

After a half century of teaching and thinking about this problem, I wish I could have an answer, as a genuine solution would likely make me rich. I can, however, safely say that wishing it away doesn't help. 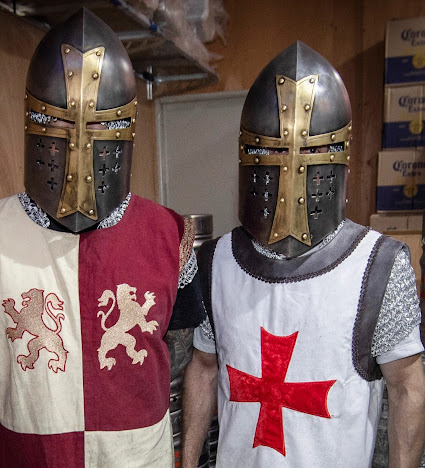 The nation was rocked today by fresh allegations of religious prejudice at the heart of the Monarchy. Speaking on BBC’s flagship morning programme Bleatfast, Sir Rious de Ralement (pictured above, right) sobbed as he related a bruising encounter with an elderly member of the Royal Household:

She asked me if I was a Christian. What on Earth could have given her that idea? I said no, I’m a pagan actually. But she wouldn’t let it lie. What were you before that? RC? CofE? I tell you, I felt violated.

Sir Rious felt under his tabard, moved the large wooden cross beneath it to one side and retrieved a sodden handkerchief. He blew his nose and muttered:

Lucky I had a tape recorder on me - here’s a copy of the transcript.

Sir Rious (formerly Brian Prendergast) spoke movingly of his childhood on the Bungalow Estate in Penge. His peers used to laugh at the monk’s alb he wore over his school uniform and his chemistry teacher scolded him for lighting a votive candle during lab experiments with hydrogen.

It was a lonely hell. My Jew and Muslim class mates never accepted my invitations to our Sunday family pork roast. But I won’t give up, I’m proud of my homicidal Crusader heritage, even if I’m not one myself.

The BBC was deluged with sympathetic tweets during and after the broadcast.

If you have been affected by any of the issues raised please etc etc.

Sir Richard Starkey MBE known professionally as Ringo Starr, is an English musician, singer, songwriter and actor who achieved international fame as the drummer for the Beatles. That was more than fifty years ago and in the years since then Ringo has continued his creative journey with eighteen solo albums, several film roles the most well known being in "The Magic Christian" alongside Peter Sellers. He has published three books including the children's book "Octopus's Garden" as well as many other projects including his 'All Starr' band.
For all his many creative successes, Ringo is and always will be first and foremost a musician, a drummer. Ringo’s candor, wit and soul are the lifeblood of his music. As he sang on the autobiographical Liverpool 8, “I always followed my heart and I never missed a beat.” Peace and love are his life’s rhythm and melody, and he propels this universal message in everything he does: his evocative artwork, his enthused live performances, his legendary songs, all imbued with the joy, reflection, and wisdom of the music icon the world knows and loves simply as ‘Ringo.’
He is now 82 years old but looks twenty years younger so music must be keeping him youthful and he is still making records with a few of his most recent included below.
https://www.ringostarr.com/#/
https://en.wikipedia.org/wiki/Ringo_Starr