SOMETHING FOR THE WEEKEND: Lick my plate (dogs in restaurants), by Wiggia

From what I have seen lately in the few newspapers I buy now, and especially in their supplements, there are endless articles about what various correspondents, celebrities (a pretty meaningless word these days) and anyone else who will give of their time, did in the lock down and what they have done since.

The articles on what they have done / will do / won't do since lock down dominate the colour section at the moment. Hardly a day goes by without some Islington bubble dweller pronouncing how they don’t know how they survived the confinement but learned how their life balance had been enhanced by being surrounded by obnoxious out of control children for four months and how brave they all are stepping out again in the world - the new normal.

There have been several articles on how eating out at the Ivy and elsewhere has created a void that can’t be filled and how wonderful it is to be able to go back sit near a Z list celeb, meet a celebrity chef,  and spend lots of money on linguine again, how did we manage!

But one article on eating out caught my eye on Thursday in the Times supplement. The article was little more than a huge plug for Georgio Locatelli’s restaurant and the restaurant industry in what for them are dire times, but it had a strange slant, something which has been gaining momentum for some time in this country: dogs in restaurants. 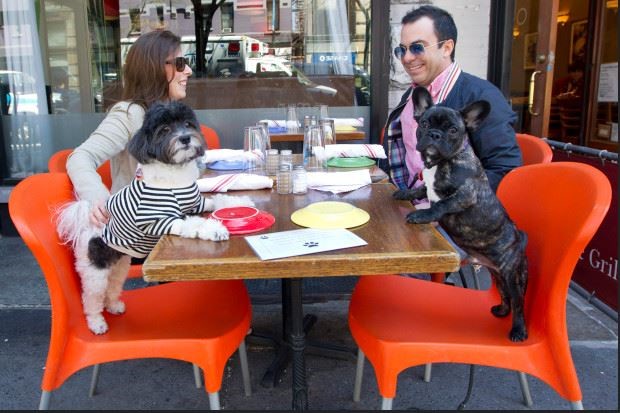 The above comes into the attention-seeking category: aren’t I clever, ain’t they cute? - No, not really.

The writer, one Kate Spicer (food critic! No, me neither) made great play of dog friendly restaurants and Georgio's in particular and the main photo in the two spread piece shows her with her dog at the table in Georgio's. When I say at the table I mean sitting on a chair looking at her plate of food; this may well have been staged for the piece, yet a paragraph early in the piece suggests otherwise…

“Good dogs are allowed there, I’ve been welcomed alone with bad hair in my dog walking clothes and with two leggy lurchers. It’s an intense pleasure to eat there solo with my boys curled up beside me and a plate of chestnut tagliatelle with wild mushrooms and a glass or two of fruili to go with it.”

For a food writer the throwaway ‘fruili’ was a bad error: there is no such thing as a glass of fruili and it should have a capital F. Fruili is a region in northern Italy home to Pinot Grigio; she should know that, or not, but I digress.

There is no law against dogs being in restaurants. Until recently very few food-serving premises allowed dogs inside but that has softened quite a lot in recent years. I can only assume it drums up extra trade.

The French have never had such qualms about dogs being in restaurants. It has been a regular sight, the lap dog on the lap of the eater, something that I could never get my head round as to why anyone would want to have a dog's nose near food, knowing that it had been up its own arse minutes earlier. I really don’t get it; the French, well… 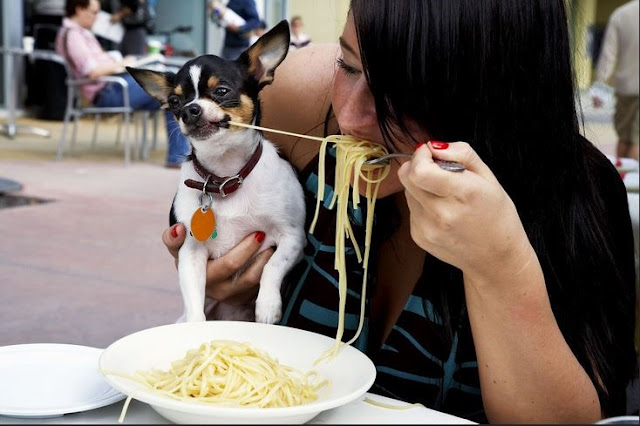 I have lived with dogs at home for the greater part of my life. I trained dogs for competition at the highest level as a hobby for twenty years so I feel I am coming at this with a the slant of a dog lover not hater.

Not once in all that time did I take a dog to a restaurant or ever wanted to. Pubs, yes, where the dog stayed on the floor when you had a drink at the bar; but even that was a rare occasion. Even in the home the dogs were never allowed into the dining area if we were eating and definitely no sleeping in the bedroom or on the bed as many do. 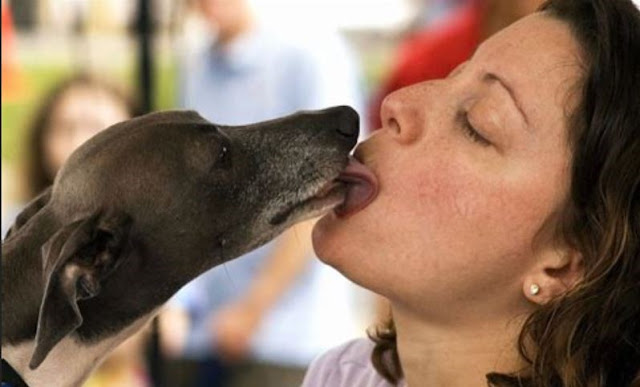 There was an article linked to this photo talking about the deadly disease the owner who allowed this had caught. Unfortunately it is not available in this country but this gives a short low-down on why you should not allow your dog to lick your face.
https://www.quantumbooks.com/other/travel-and-living/is-is-dangerous-to-let-your-puppy-lick-your-face/

In the end you come back to why would anyone, as this writer says she did, take the dogs out in the rain and then ‘pop in’ to their local Michelin-starred restaurant. What proprietor would want those muddy feet on his plush carpet, never mind on his seats? Madness. Is this another case of “because I can” rather than any practical reason? She finishes her piece with another recommendation of a restaurant, trying hard to mitigate the effects of the virus, that has made an outdoor space and installed a beehive (?)  And the place is dog friendly. I am glad she told me that so I can cross another pretentious establishment off my go-to list; not that I go to many restaurants these days, mainly because they are already expensive rip-offs in the main and are still pretentious.

It did however remind me of the days I used to be able to buy the dog meat in bulk from the local abattoir, then sorted it out for freezing when I got home, cooking raw tripe after washing in large containers, all whilst the dogs salivated outside at the kitchen door. You wont get a plate of that at Locatellis - the dogs would have it off your plate before you could say wild mushrooms.

And lastly a photo that has absolutely nothing to do with the above, but I thought you might like it: my last two OES at play (or one is, the other is just being momentarily tolerant.) 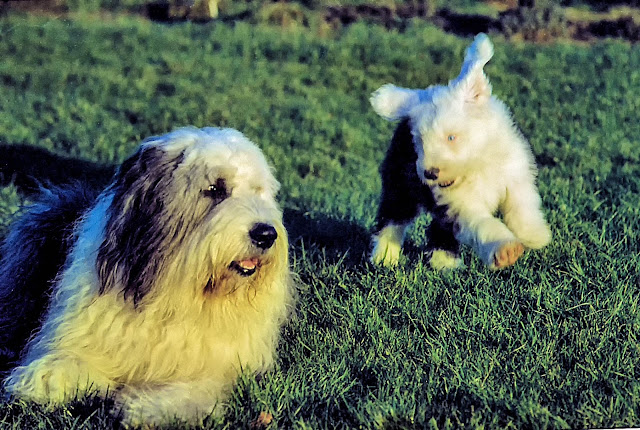 Oh, and as a breed you definitely do not want them anywhere near a carpet!

I don't consider myself a dog person,I do,thanks to the universe, have a dog currently living in my house.
I would never consider taking the shed monster to a restraunt.
I have no problem with well behaved dogs in outside restraunts,it nice to meet new dogs.
I am glad so many people have a dog to keep theme company,but they are not people.
There are a lot of lonely people who depend on their pets for sole company, maybe a restraunt specificly for pet owners.
I know if I go to a restraunt I don't want random hair in my food,ever.

a) I would rather have dogs beneath the table at a restaurant than some of the awful children I have seen.

b) The one Old English Sheepdog that I knew would pee herself with joy whenever she saw you.