The Beast From The East, by Wiggia 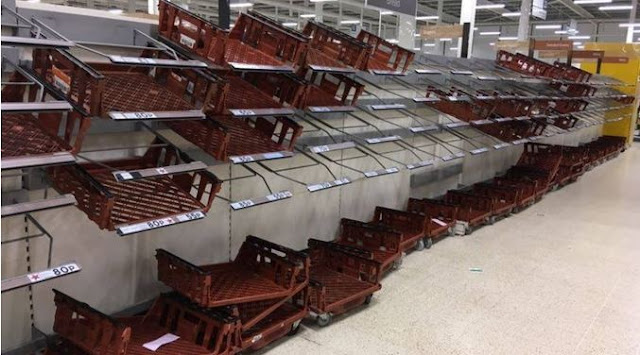 All went well until I was requested to fetch a loaf: what I saw as I turned into the bread sales area was a scene from East Germany, when all the shelves were permanently empty in the food stores. Amazingly with only a couple of days left of the effects of the “beast from the east”, shoppers were still plundering the bread and milk sections.

I had taken No1 shopping on Monday morning as usual and it was fairly quiet but by the time we left the car park was full as the public piled in to purchase anything that would stave off death by starvation. The till operator said the weekend had been unbelievable with the public buying multiples of everything from bottled water to fruit and veg and they had run out of most staples.

I have no idea how the public react to a weather warning on the rest of the continent but we have made an art form of the whole thing, from the weather reports in the MSM threatening Armageddon with threats of ten foot snow drifts, ice flooding and gales everywhere, trains stopped running before any snow had fallen in the south, schools shut everywhere on the principal that NO one would be able to get in and health and safety prevailed - prevailed to such an extent that the same schoolkids told to stay at home for safety reasons were then seen on national news jumping off steep hills on unlikely homemade sledges.

The road outside my house had the good fortune to have a snow clearer come through in the night, but I discovered in the morning that the snow clearer in ridding the road of snow had thrown it all on the pavement, meaning pedestrians had to walk in the road !

I can remember a similar cold spell - it was worse - back in the early eighties, when a local firm in Essex cornered the market in moon boots, bringing in on a barge up the river Blackwater in Essex thousands of these boots from Holland; I thought afterwards there must be cupboards everywhere stuffed with these boots that will never see the light of day again. There is no doubt that an impending weather “event” can be a great sales promotion.

A similar thing happened in the Great Storm when trees were down all over the place: my supplier told me he had been inundated with people wanting to buy chainsaws as tree surgeons could not cope with the work offered, and he had sold out twice and Stihl were trying to get extra supplies in from Germany.

Again I thought that there would be thousands of redundant chainsaws on eBay soon after, as those that had purchased them would have no further use, but no it never happened and again there must be thousands of hardly used chainsaws rusting in sheds all over the country. So no doubt now moldy bread and rancid milk is already being dumped along with limp lettuce and off veg, all will be forgotten until the next beast from the east or wherever it may come from.

It makes you wonder how people coped when we had real snow on the 60's and 70's. And by that I don't just mean obtaining food. People just got on with it in those days.

Part of the problem with food purchasing is supermarket shopping where things are brought in from the far end of the country so adverse conditions may disrupt the supply for a day or two whereas if purchases are made in shops that provide local produce, supplies are more readily available even in adverse conditions.