SOMETHING FOR THE WEEKEND: Scrooge's Children, by Wiggia 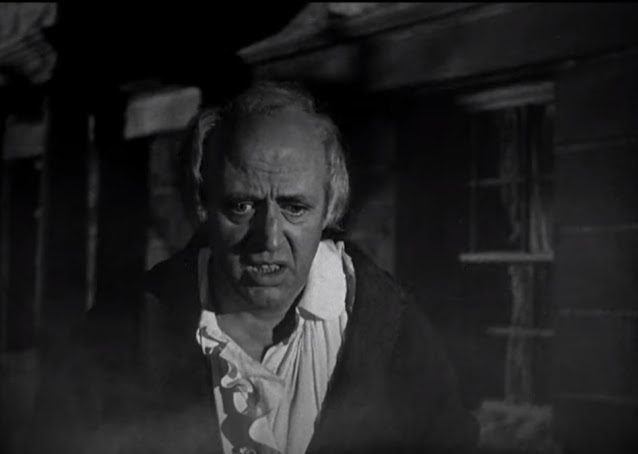 Watching yet again Alistair Sim’s wonderful version of Ebenezer Scrooge and his miserly callousness made me reflect on people I have known with tendencies to be of the 'short arms, deep pockets' variety.

I cannot give reasons for this what is a very apparent affliction in some people as I am not a psychiatrist, it is only that there is no apparent pattern in why people behave like that and we have all met them.

This is in no way a reflection on people who are down on their luck and have to reign in their spending to suit the occasion, we have mostly all had experience of that at some time in our lives; no. this is about those unexplained traits people show when it comes to actually parting with the green stuff or the ‘laughing lettuce’ as an old friend once called it.

Just sometimes you can see why previous experiences influence this reluctance to part with the aforesaid moolah: people brought up in poor households often find it difficult in later life to change when the circumstances they live under change for the good, it is as if it is engrained in them from those years of little to continue life in that vein even when there is no longer a need to do so.

But how does that explain the child, and I have a cousin who was and is exactly like this, who would have a bag of sweets in his pocket, leave the room to put one in his mouth and return, never ever offering anyone else one, something he has retained all his life despite being never anywhere near penury at any time, never a round of drinks, nothing but collecting items for his own presumed pleasure to be locked away somewhere; the vulture when a family member dies, I am sure we can all relate to those.

The there is the one in a group who never buys a round in the pub on a Sunday morning, or any other time come to that, who will as it approaches his turn find a timely excuse to leave or make a prolonged visit to the toilet, always long enough for everyone else to say sod it waiting and get another round; or the friend who would take a drink but not reciprocate, saying he only had one so was not buying a round as he doesn’t drink despite taking that first one purchased by someone else - you have to have some brass neck to do that but again I know someone who did exactly that and on more than one occasion.

Life would be extremely boring if we were all the same, it is the differences that make the world the interesting place it is, yet there is no doubt that some traits or more than a little puzzling and on occasions annoying to put it mildly.

The ones above all that interest me are the ones that have no real reason for this miserly conduct. I had a neighbour who was also a friend. He sold out a car retailing business after an offer he couldn’t refuse was made; until that time he spent money, had a Rolls Royce, liked clubbing in town, even sponsored a boxer and promoted him.

He wasn’t married but had a long time girlfriend who contracted cancer and died; before she died they married. At that time he lived in a big house with six acres of grounds and part was a mini industrial estate bringing in more income, so he was not what you call short of a bob or two, yet that moment apparently changed his whole view on life despite no obvious reason for the change.

He became obsessed with having what he called a 'result' with everything he bought, spent a lot of time polishing an old wedding car he used to hire out in the belief it was worth a lot more than it was (this from a successful car dealer), drove around a Ford Escort that had seen better days and took great delight in telling me where I could buy socks like his at only a pound for three pairs although that is exactly what they looked; he even put in a nonsense offer for my house when a sale fell through, saying he thought he was doing me a favour. He was totally obsessed with not spending money despite being a millionaire.

After remarrying he and his wife went on honeymoon. The house they were in when we were neighbours was up for sale and had been for some time because he insisted it was worth more than anyone who valued it, and had no viewers, but as luck would have it while away a buyer made an offer as it reminded them of the house they currently lived in and he would be near the football team he supported; my neighbour cut short his honeymoon to come back and seal the deal. There was no need but that instinct meant he couldn’t help himself; he has never changed, but why did he become like that in the first place?

The late J Paul Getty was renowned for his miserly stunts; that was not so much because he was a miser but rather a show of power over people, e.g. the pay phone in the hall for his guests at Sutton Place in Surrey. I also know for a fact that a typical stunt would be to arrange a business lunch, invite those guests who would inevitably be wanting some of his money for projects and then get up before the final dish and simply disappear, leaving the ‘guests to pay.’ Would any complain? Of course not! How do I know this? Simple: a friend at the time actually attended one of these lunches.

He is often slammed as being a miserly jerk, but that comes mainly from people who wanted something from him and didn’t get it, though in his latter days distinguishing life from art was not easy as reports of his appearance in crumpled suits and the rumours that he washed his own underwear started to filter through. Perhaps the life part took over from the acting; so many stories that have been embellished over the years make it difficult to sort the truth.

I also had a very rich client who shall remain nameless who started to serve half bottles of wine at dinners with business people in case consuming whole bottles would cloud his actions. Was that sensible or just mean? It’s a rarefied world there at the top; mind you it was Château Lafite - I saw the empties.

I now have another neighbour who openly admits he is tight; again his parents struggled when he was young and he blames this as the reason. In his case though it is like a dual personality disorder: he cannot say no to his family and even friends have been helped financially, yet he buys a £40k car after years of running around in bangers but gets the bus into town because he won't pay the multi-storey parking fees. His excuse is that he has a bus pass, but even when he does take the car in he stops short, parks in a side road and gets the bus the rest of the way.

Again, his lovely old house - it was the village pub - doesn't have a piece of furniture that was not picked up in sale or handed down from deceased family members; and new clothes? - don’t be silly. Amazing how someone can switch from philanthropy to refusing to part with money when buying for themselves; everything has to be a 'result' - where have I heard that before?

The wearing of the same old clothes is a recurring theme among the stingy it appears, as is the use of cheap supermarkets even if it means visiting several to get the whole shop and travelling miles to do it. If they tell me Aldi do a very cheap coq au vin but I have to travel 10 miles to get each way, it is not being thrifty, but that 'less' sign goes a long way to expunge any common sense.

In the same way, being shown a packet of white rolls for 45p that look like 45p rolls does not inspire me to make the trip: they could be like the ones below and probably are. We stayed in an hotel on Lake Como years ago where the rolls were indeed as pictured. We were friendly with a German couple who also had noticed these empty rolls and we waited for the surprised looks as new guests would put a knife through one for the first time to see their reaction. We never complained as the reactions were worth putting up with the air rolls during the stay; it should have been on Candid Camera. 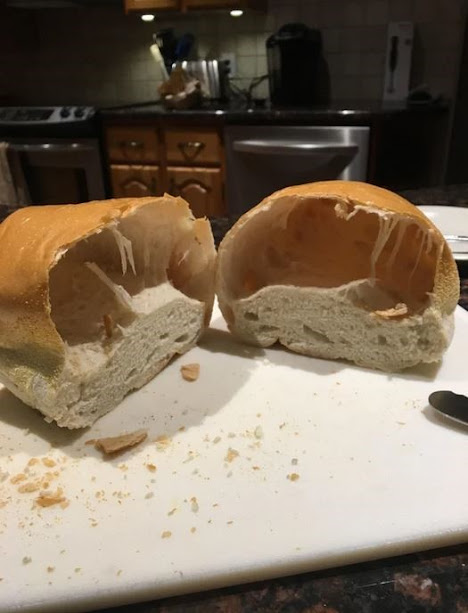 The funniest story regarding miserly conduct was not about someone I knew but a neighbour of my oldest friend in Australia. The Australians use their sprinklers liberally in hot summers  to save the grass from dying; in this particularly hot summer a neighbour told him he was not paying for the extra water, they have a fixed fee and you then pay above a certain usage, and tso he turned off the sprinklers. What then happened was that the ground shrank and the newly added extension to his bungalow started to part company with the house; as my friend said, you don’t turn off the sprinklers if you use them on a regular basis as those sort of problems are not unknown there, and he added ‘He always was a tight bastard’; Karma indeed.

We all have within us a bit of this reticence to spend. It shows in different way. It’s a bit like getting insurance quotes that leave out the extras you always need; one becomes very reluctant to pay for the extras and some people won't on principle. Naturally we look for the cheapest option only to discover it is inferior and then moan; we eschew certain brands and retailers believing the same (they are too expensive) then buy rubbish that has to be replaced far too early in its claimed life span and again moan about it. That is not meanness though, that is greed: 'something for nothing / BOGOF.'

Every now and again though you are surprised by the Scrooge effect. Some time ago, someone I knew well used to get by mistake two copies of a trade mag that interested me so he said he would mail the spare one to me, which he did. After several months it stopped arriving; when I spoke to him again I asked what had happened. He replied, 'I used to write your name over mine [I hadn’t noticed] and reposted it, they must have noticed and stopped sending the mag,' and then he said he wasn’t going to put a stamp on it - this from someone in business I spent thousands with. Sometimes these tight bastards can’t help themselves.

Still Christmas is coming, with the usual suspects who have declared they won't be sending cards any more and give to charity instead: a lie, of course, because they are too mean to send a card once a year. Now they will now be getting the same treatment from me after years of resisting the temptation to copy them: we can all be Scrooges when we want to.

Hope springs eternal. That's what they say. And remember after the visions Ebenezer Scrooge was a totally reformed character. Love the Tom Thumb clip.