Back in the Sixties there was a renaissance of sorts for big-engined gran touring cars, this was the original concept of GT unlike the hot hatchbacks today that tack on the GT label to cars that are in no way touring cars.

The Gran Tourismo goes way back in motoring history with cars from all the top manufacturers fitting the bill, all were top end price models from Bentley to Bugatti and many in between.

WWII saw the class disappear along with many other luxury automobiles as the war effort found many of the same factories diversify into military production, and it was some time after the war before luxury cars of any sort started to reappear in the showrooms.

By the Sixties however the automotive industry was in full swing again and the utilitarian vehicles of the immediate postwar years were being superseded by much more advanced models. Cars such as the Citroen DS from ‘55 showed the way ahead, and the revolution in design of racing cars that was spearheaded in this country from the likes of Colin Chapman, John Cooper, Eric Broadley and others not only transformed racing cars but the ideas filtered down into production vehicles and for a short period we were at the forefront of car design.

What the Sixties saw was the re-emergence of the Gran Tourismo model. Fuel was cheap and big engines proliferated, American V8s became the go-to engine of choice for many of these luxury cars providing a lot of power with little fuss, big 5.7 litre Fords and Chrysler hemi 6 litre engines being the most popular.

The cars varied depending upon the maker. Most British versions of the type were in the gentleman's sports tourer mode with lots of leather big seats and plenty of wood in the cabin, all this signified class and wealth to go with the comfort and speed supplied.

The most enduring of these models was the Jensen Interceptor with its distinctive curved wraparound back window and tailgate, originally with the Chrysler 6.3 ltr engine and later the 7.2 plus torqueflite auto gearbox.
https://en.wikipedia.org/wiki/Jensen_Interceptor 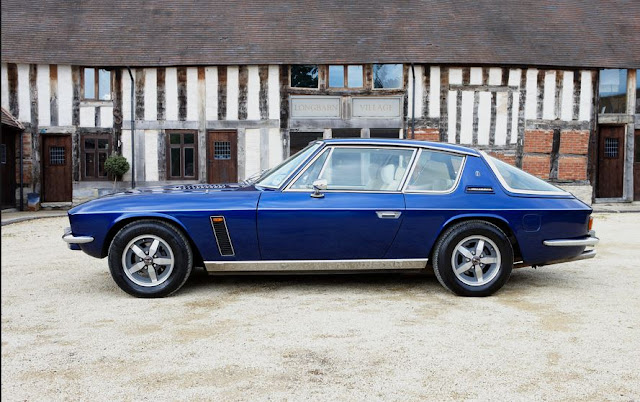 There was an earlier Interceptor using 4 litre Austin running gear but that was a small run car and did have not the success of the V8 model.

Another to some, a lookalike, was the  Gordon Keeble very similar in concept with the same luxury interior exuding a gentleman's club. This car used a Chevrolet V8 and the distiguishing feature was the slanting headlights. This car was never the commercial success the Jensen was and only just a hundred were produced, and for this reason alone they are much sought after.
https://en.wikipedia.org/wiki/Gordon-Keeble 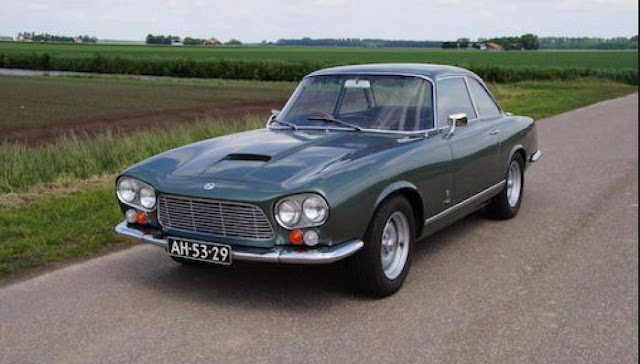 Bristol cars started as an amalgam of Fraser Nash and a new company producing the beautiful 400 series BMW powered cars and they could be rightly included in this listing, but it was the later Sixties Chrysler powered cars the 407 - 410 models being the ones in the Gran Touring category. The company had an interesting history and is worth a read for that alone. Personally the later big V8 engined Bristols never appealed - "barge-like" came to mind - but they were hand built and had a loyal clientele.
https://en.wikipedia.org/wiki/Bristol_Cars 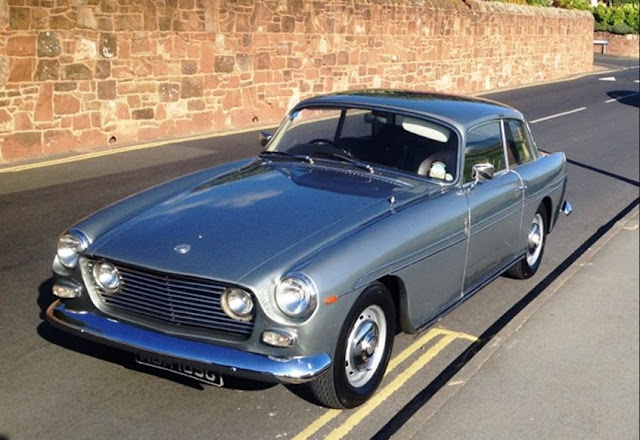 Facel Vega preceded Jensen with the 500k models coming into production in the fifties. The Facel II model is the contemporary of the above but the company went bust in ‘64 leaving this luxurious car as the most sought after of the group. Another Chrysler powered auto but using an upgraded version of the V8 with in manual form 390bhp from its 6,3 litres, it could outperform all but the most out and out sports cars of its time.
https://en.wikipedia.org/wiki/Facel_Vega_Facel_II 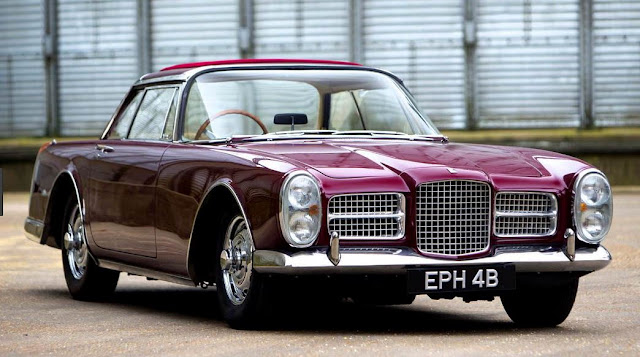 It was very much the car of choice for the stars with Ava Gardner and Dean Martin being just two who owned Facel Vegas.

Needless to say the Italians were in the mix with this class of automobile, though they always found it difficult not to be ‘sportier’ than those shown above. The nearest to the style of the British cars was from ISO: the Revolta, an unfortunate name, was the nearest in looks and purpose to the others, in fact it was easily mistaken for those other cars, it could be that they all had Italian coachbuilders and the style was almost generic. The ISOs used a small block V8 Chevrolet engine and transmission for the Sixties cars. An older firm started in the early Forties, they made motorcycles  at one time and were famous for two extremes of powered travel, the Isetta bubble car and the outrageous ISO Grifo sports car. The last models from ‘68 had the 7ltr Chevy engine and were capable of 186mph.
https://en.wikipedia.org/wiki/Iso_(automobile) 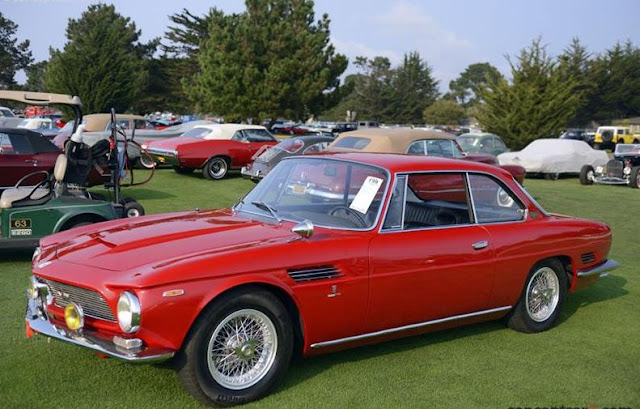 De Tomaso shouldn’t be here as it is really a four door saloon. First produced in ‘70 it shares a chassis with the Maserati Quattroporte of the same period, but it was powered by a Ford V8 and had the same type of gentleman's interior so it just about squeezes in. Again the company was better known for its V8 powered sports cars such as the Pantera.
https://en.wikipedia.org/wiki/De_Tomaso_Deauville
https://www.classicdriver.com/en/article/cars/de-tomaso-deauville-better-maserati-quattroporte 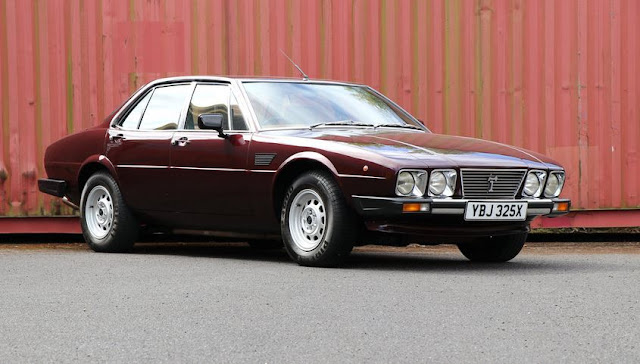 Maserati produced their very own gentleman's sporting carriage with the 5000 GT from ‘59, with Maseratis own 5ltr V8. Only thirty three of these exclusive cars were ever made and many went to high profile names of the period.
https://en.wikipedia.org/wiki/Maserati_5000_GT 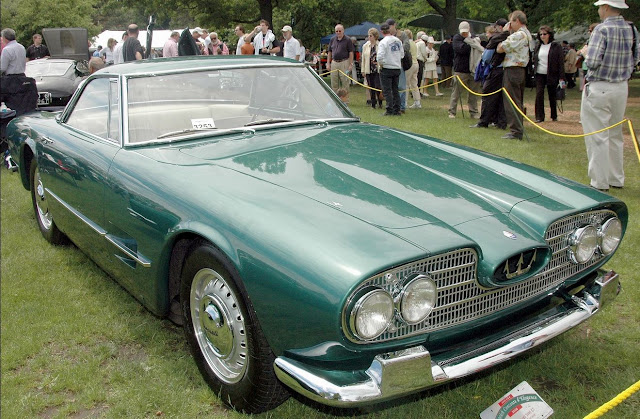 The Maserati Indy, first seen in ‘69 with an in house 4.2 ltr V8 and later with a 4.7 ltr and finally in ‘72 a 4.9 litre engine is one of a long line of Maseratis that fall into the Gran Turismo classification, the earlier 3500GT being the obvious classic, but the Indy had the V8 and therefore qualifies to sit alongside these other fast touring vehicles of the period.
https://en.wikipedia.org/wiki/Maserati_Indy 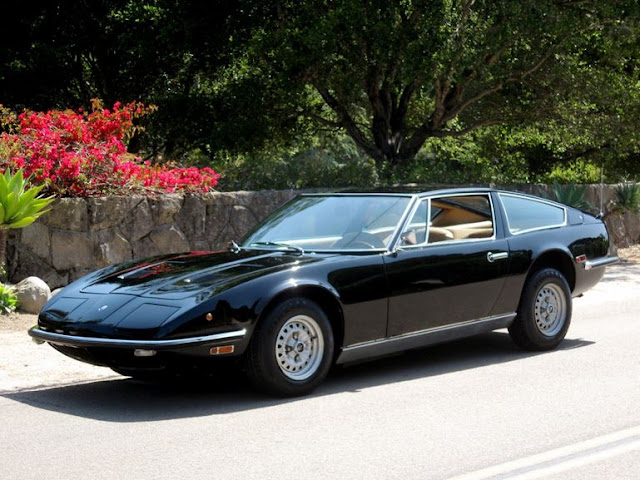 There is no doubt this was a golden age for this type of car. Pre war every major manufacturer made these Gran Turismos and that was the original golden era. Sadly once the Seventies came along bit by bit and not helped by the fuel crisis of the time they became almost extinct. They represent a time of open roads and cheap fuel, jaunts at speed down to the Cote d’Azure and beyond.

I don't know if you can access it in the UK, but Jerry Seinfeld has a web series (now on US Netflix) called 'Comedians in Cars getting coffee'.

Each episode shows off a special car from the past, from the exotic and expensive to one of the first Peugeots.