Mad Dogs and Englishmen, by Wiggia 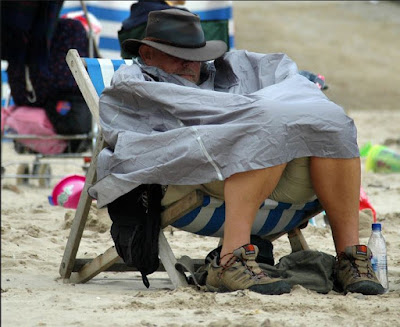 The extremes of temperature, because they are so rare in this country, bring out the weird, the eccentric and the downright baffling.

We have all seen the wonderful world of the clothing innovator who manages to convey a sense of the sea in winter trudging the aisles of the local supermarket in full fisherman's regalia, sou'wester and all, and the inventive shorts, hats, sandals and socks - no British white male would wear sandals without socks such as those louche Europeans of questionable stock do, or effete actors. Some years back in Africa a tourist appeared for dinner wearing shorts, an open neck white shirt and a Tweed jacket; only a Brit could have carried it off in 90 degree heat.

Of course this hot weather is a positive boon for the tattooed, all manner of sleeveless, legless and worse garments appear, allowing the inked areas to show in all their awfulness, and the pink people come out - they have no choice of course having burnt themselves the first time they laid in the sun and now can’t bear to have anything on the skin apart from calamine lotion.

On the road open top cars with blonde sunglassed drivers are everywhere trying to give the impression they always drive around like this; a sort of Promenade des Anglais in Peckham. In a normal year you could be forgiven for thinking no one buys convertibles, but we are wrong, it is simply that in a normal year, nine out of ten, no one drives them: they remain tucked up for this very occasion.

Camper vans and caravans abound, seemingly reproducing en route as there are so many of them making a bee line for the same field somewhere on the coast. Today either of these is not enough, many have bicycles, motorbikes attached as well, canoes on the roof and for real oneupmanship you have all that and a small car on a trailer behind, or a yacht or powerboat, in all taking up about sixty foot of our small roads.

I am biased: I have never seen the attraction past the formative years when it was a cheap way to see the world of spending huge sums to sit in a field with others of the same persuasion. There was a motor home show last weekend on the showground near us; not content with looking at the latest models they all came in their motor homes for the weekend and sat in a field - the conversation must have been riveting - and then all went home !

I have a cousin who owns a motor home: his wife puts photos up on Facebook of him having a cup of tea by a pond or feeding ducks or sitting in a deckchair with an inane grin and a glass of wine - does anyone care ?

How do I know? Well I joined Facebook under pressure for a local community page but after three months being asked to be friends with people I had no interest in and having rows with “community members I deleted my account. Facebook has a strange pull for those who like to post gurning photos of themselves and family members all telling each other how wonderful they are, but I digress.

The Met Office is in full flow with yellow and amber warnings, localised flooding, power cuts and travel disruption all included in these warnings, I have been keeping a record of these over the last four weeks and we have had eight; all have disappeared as the moment of doom approaches, or moved to a later time and then deleted. Result, absolutely nothing: clear blue sky and skorchio all the way. Not a single drop since the heat started in June, yet still they persist with the warnings; like a stopped clock, one will eventually be right.

As a finale to all this last, with the windows and doors open the sound, loud, of a man's voice wafted in from the direction of the park alongside our garden. They have now and again a local band that uses the hall and at first I thought that it was them, an aspiring rapper perhaps, but there was little in the way of music to accompany this voice. Where the hell was it coming from? My curiosity got the better of me and as I approached the boundary hedge I could see a few figures the other side and the voice got louder. It was only when I put my head through a hole in the hedge that  the truth dawned: it was the fitness class. They had debunked from the center because of the heat inside and had come over to this side of the field as my tree boundary provides shade. The voice of course was the instructor using his amplifier for his instructions and the accompanying musical beat.

At that moment I should have retreated but the large contingent of ladies of varying ages and shapes were in their tights, shorts, leotards about to spring into action or were supposed to. It has to be said I was getting a rear view of all this and in different circumstances could have been accused of voyeurism or worse, so I slowly retreated to the safety of my garden with the rear view of multiple ladies' bottoms contorting in the heat. The last words I heard from the instructor were "One, two, three, four, you can do it!" - they probably could.

That was such a good read - brought back faded nostalgic memories of the occasional British summer, long ago. Thank you! We're better equipped to deal with the more frequent bouts of heat here in Oklahoma USA, which is a blessing because we reached 112 degrees (Fahrenheit) one day last week.