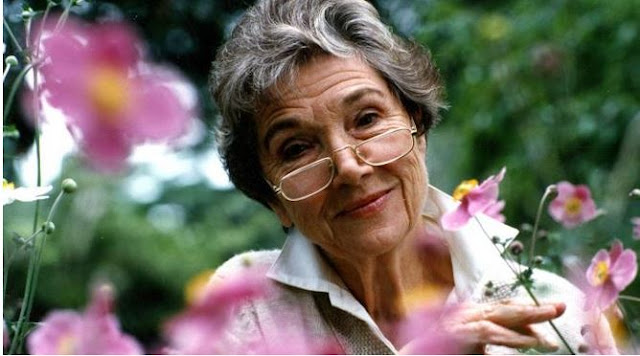 I saw today that Beth Chatto had died, I knew she had not been well for some time though she still managed to get around her wonderful garden on her mobility scooter.

I met Beth in the very early days of her fledgling nursery and garden, a woman full of energy and positive actions, no dithering for her on where to put her plants, they went in where she wanted them with due consideration to site and soil and if they didn’t perform out they came, it was a ruthlessness that served her well.

Her husband was part of the Chatto & Windus publishing house family and his father bought him a 100 acre  fruit farm, it was here that Beth learnt the hard way the rudiments of soil and site and muck and how to use all to best effect.

She was a gifted flower arranger and this was she said part of what gave her an eye for placement of plants in the garden.

They purchased a plot at the present site of about 3-4 acres on what was to most a very difficult site on yellow clay but it had a stream through it that was dammed to form large ponds and provide sites for water and edge plants. The nursery then in ‘69 consisted of little more than table sales , today it and the garden cover 14 acres and employs 40 people.

Those early days were where she put the knowledge of her husband Andrew and her own to good use. The nursery then as now would have huge compost heaps that would in time transform the land around her. 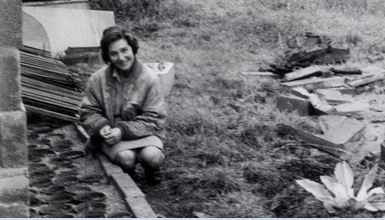 The first time I visited the place was just about getting going, and the reason I visited was because I was looking for some unusual perennials that were on her small nursery list and were unobtainable elsewhere. It was this listing that would give the nursery its name Beth Chatto Unusual Plants.

My subsequent visits were for more than just plants. Beth would freely give advice and I had just moved to a house in Essex that had the dreaded yellow clay for a garden, plastic goo in the winter and impervious in the summer. She showed me how they simply dug trenches, used grit and anything else they could get for mixing in the bottom for drainage and then barrow loads of compost. It was an exhausting exercise on the scale she was gardening, her husband's input was mainly his knowledge of the land as he was suffering from  emphysema, she was running the show on her own as well as looking after Andrew.

She was not a garden show devotee but the impact of Chelsea is not to be dismissed and she entered and won ten gold medals in ‘77 - ‘87 and then the RHS gave her its highest award, the Victoria Medal of Honour. She was made an OBE in 2002. She never exhibited again after ‘87, she had no need to: her point had been made and anyway Chelsea took a huge effort at a difficult and busy time of the year for any nursery.

Her books, and I have them all still are gardening bibles on how to tackle different situations. The early ones The Damp Garden (1982) and the Dry Garden (1978) not only brought her to the attention of a wider audience but promoted her garden, her life's work.

She was never a designer in the traditional sense. Her garden evolved, was changed and evolved further, always looking to improve and place plants in better situations. Much of this went back to her husband's  research into habitat and fauna, "the right plant in the right place" has been used many times as her mantra and justifiably so.

She travelled the world in earlier years sharing her beliefs and became one of the foremost plantswomen of all time. In my opinion there has never been a better one. What she and her husband did with that unforgiving windswept  piece of land in the driest area of the UK was mind-blowing; there have been many great gardens built in this country but none have been built from what most would consider almost impossible barriers in human effort and a “testing” site.

Her words of advice stayed with me through my own career and are never forgotten. I sadly have not been back to the gardens for some time having moved from the area. It has become a go-to on the garden circuit and coaches arrive throughout the season, but that can never take away the accomplishment of Beth in what she created the hard way.

Greatest plants person we have seen?  I know no better. She will be missed by all that had a chance to meet her. I thank her.

A great tribute to Beth, how lovely that you had the privilege of meeting her.

I never met Beth Chatto, nor have I ever visited her garden (wrong side of the country), but I've derived great joy and knowledge from her books since the 1980's. Her legacy will remain.