Looking for something in the untidiness of my cupboards I found something else, as often happens, which diverted me and now I have forgotten what I was looking for in the first place!

But that something else was a few tubes and jars of 'interference' paints, paints which give a tint to a colour depending on the source of the light.

So I decided to play around with them and see what effects could be achieved. These are all acrylic paintings on 2" x 2" canvas. The half dozen here are the result. 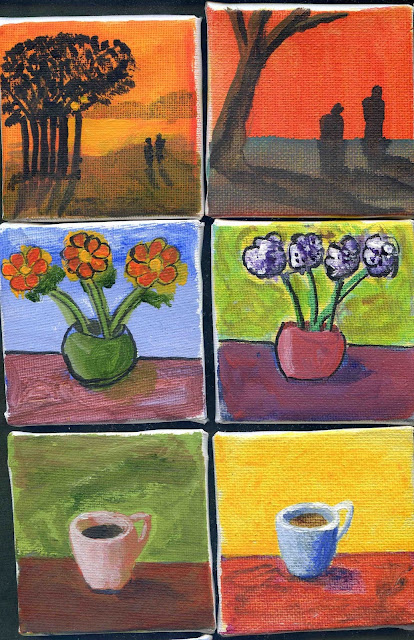 The first canvas, top left, was covered completely with interference gold and then the scene was painted over loosely with bright normal colours and the underpainting shows through in places. Below is an enlarged portion of it; not sure if it can be seen clearly in the image. It shows partially in the tree and on the shore line next to the figures. 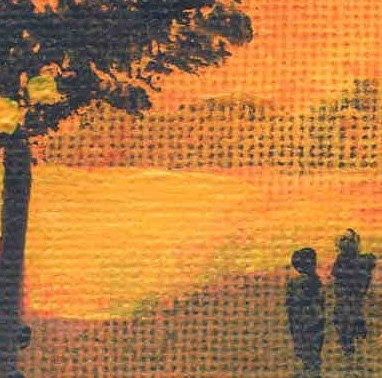 A few more with varying success. The dervish is painted with interference copper effect and I think it shows more clearly than the others (I'm not entirely satisfied with the figure so I'll have another try some time.)

The sky behind the line of trees is painted with a fluorescent blue over a yellow background and is very striking in reality, not sure about in the screen image. The ground around the trees is purple mixed with yellow. I might change the shadows at a later date (or not.)

The third image is one of several similar which I did before Christmas, the others given to friends as Xmas presents! 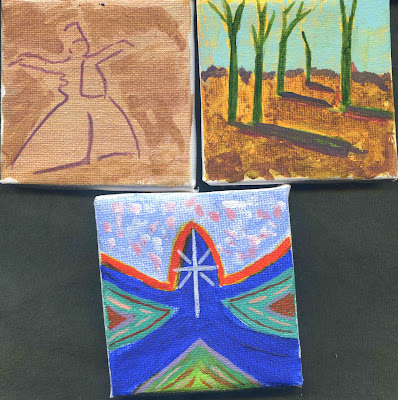 I think I have done about two dozen of these minis over the past two weeks but when I was in Poundland the other day I couldn't see any more. Perhaps they no longer sell them and in fact their art materials are now sparse compared to last year. Perhaps I should 'upgrade' - painting teacher No3 told me ages ago I should be painting 'big' pictures. She is right but I would need a bigger house! I shall continue painting, whatever the size, because...... well, because I can't and do not want to stop. As noted previously, when I am 100 I might be getting the hang of it!

I forgot to mention that I also love the blue star painting :-)