Continuing the examination of the Golden Section plus the significance of Ø in the formation of the universe; following on from part one here -
https://theylaughedatnoah.blogspot.com/2022/06/colour-supplement-golden-section.html

It is not just the human body which grows out of Ø.
The Golden Section is evident in plants as can be seen in this graphic representation of the arrangement of seeds in a sunflower. The spirals are asymmetrical with 21 seeds in the clockwise spiral and 34 in the anti-clockwise spiral. 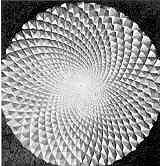 The same asymmetrical arrangement is evident in a pineapple with the diamond shapes being 8 one way and 13 the other. All of these numbers belong to the Fibonacci series as shown earlier and demonstrate that the growth of plants follows the same 'rule' of Ø.

The Golden Section appears as a spiral in plants, as seen above in the sunflower seeds, and in other animal life both large and small including the mollusc known as the nautilus. https://en.wikipedia.org/wiki/Nautilus
And in this cross section through the nautilus shell you can see probably the most beautiful demonstration of the golden section in the whole of the natural world: 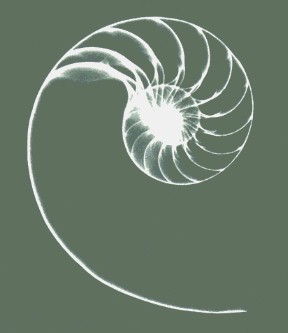 And that is the point: the Golden Section, the Law governing growth of all living things is everywhere from the spiralling galaxies in space to the structure of DNA. It is what unifies the entire cosmos.
The Age of Reason and the Enlightenment which was the birth of the scientific view of the world make it difficult now to speak of the universe as a creation but if the Golden Section is not the creator’s design then what is it?
- - - - - - - - - -
A further illustration of these Golden proportions in and of the human body comes from one of the great heroes of the Modern Movement of the early part of the 20th century, the Swiss architect Le Corbusier.

Le Corbusier wanted to find a way of creating harmonious proportion in his buildings in a way that would allow people to feel “at home” when living or working in them. He returned to the idea of the Golden Section which was first recorded in Classical Greece although its origin is much older.

Originally he took as his starting point a hypothetical man 1.75m tall – a French height he called it. The modules developed from this starting point, as well as being difficult to calculate accurately, proved unwieldy and unsuited to everyday living; disproportionate in fact.

In one of his books he tells the following story:­

He had been working for some time on his Modulor system using these French decimal measurements but without much success. Then one of his collaborators, Py, said: “Isn’t the height we are working with rather a French height? Have you ever noticed that in English detective novels the hero is always six feet tall?” Le Corbusier continues: ”We then applied this standard. To our delight, the graduations of a new Modulor, based on a man six feet tall, translated themselves into round figures in feet and inches”.


The Modulor consists of two scales, the red and the blue scale (the above illustration shows the two scales combined). The dimensions of the blue scale are double those of the red and the divisions of each scale are based on Ø the phi ratio, the basis of the Golden Section. Thus the Modulor is not only an instrument of architectural proportion but also a means of ensuring that the buildings designed using it are of a human scale.

Here again we are coming closer to the answer as to why the Golden Section is important. If it occurs naturally in the human figure, as demonstrated by Leonardo, and in all other plant and animal life then by using Ø as well as the dimensions of the human figure as a starting point for design then such designs as are produced will, in theory, reflect the harmony within ourselves.

As an aid to creating architectural proportion, Ø is evident in many of the buildings of antiquity. The Parthenon in Greece for example, although it should be noted that in past ages, unlike the present, all buildings were designed on a human scale using Ø to create a harmony between man and his surroundings.
This explains why a modern building can induce a sense of unease without the source of that unease being apparent. It could even be said that this is one of the reasons for what is known as “sick building syndrome” where workers take sick leave with unidentifiable illnesses; their offices literally make them ill. Don’t forget that the word disease could also be written dis-ease.

…the essential importance of Ø is that it represents universal harmony; a picture which displays its elements according to the ratio will be pleasing to the eye; a building constructed in the same way will likewise be a thing of beauty… we all know it when we see it but without being able to articulate what it is that pleases us…

Two books of interest related to the same subject.

A Beginner’s Guide to Constructing the Universe https://www.constructingtheuniverse.com/bookinfo.htm
by
Michael S Schneider
ISBN 0-06-092671-6

In relation to this the number 144 is also interesting in connection to earthly cycles.