WEEKENDER: The NHS Has No Response, by Wiggia 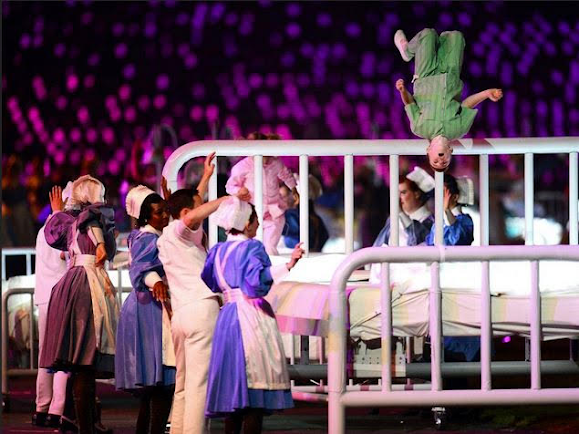 The government has conveniently dropped any questioning of the performance of the NHS during the last two years and moved seamlessly onto Climate Change, something else it has shown it has very little idea about, whether cause or solution.
The news that 12,000 patients died after catching Covid in hospital has not even made page 22 of the papers or a mention on the news channels. This is the first time after a Freedom of Information request that any figures have been officially released.
Despite it being illegal to withhold that information, several trusts  have used weasel words to not release it so the figure is obviously higher.
I am not getting into the with or from argument as the figures themselves use a method that appears to muddy the waters; it is immaterial as the numbers are horrific and certain trusts should have been shut down in normal times as they have over years been at the top of the league tables for in-house infection rates. The saying that during the Covid period the worst place to be if you wanted to catch the virus was in a hospital, no longer brings a smile to ones face.
https://www.telegraph.co.uk/news/2021/11/08/exclusive-11600-people-caught-covid-hospital-died/
As with much else the NHS seems to get a bye in these matters. If you combine this with the decanting of elderly patients into care homes and the resulting massacre, a large percentage of all deaths from the virus can be directly attributes to decisions and actions within our NHS.
The figures for care homes are not easy to decipher. The best indication would be the excess deaths above the norm which comes in at around 42,000 not all of course from that first period which is the one the NHS is responsible for, from the data out there around 20,000 can be confirmed.
So we can conservatively say 32,000 people lost their lives unnecessarily. Even allowing for the fact that as far as the care homes are concerned many would have died anyway the numbers are enough to make one think there should be an inquiry into responsibility as to decisions if nothing else.
https://www.independent.co.uk/news/uk/home-news/covid-care-home-deaths-higher-b1894592.html
Jeremy Hunt called the whole thing a tragedy? A nice use of words conveniently deflecting any blame on individuals or committees, and intimating that it was somehow a ‘natural’ disaster.
At the same time there several reports of increased drug usage in care homes that lead to earlier deaths and maybe deaths by design. It is not a pretty picture but this was corroborated by several whistleblowers in care homes during the first wave of the virus; the story never got traction, but the Sun had a moment of seriousness and published this piece….
https://www.thesun.co.uk/news/12100515/care-homes-accused-sedatives-coronavirus-die-quickly/
If true and it looks as though it has been substantiated, what an appalling indictment on our health and welfare services. It is not the first time, of course: the Liverpool Care Pathway showed the way on this and nobody was ultimately responsible for anything there either.
No person or group can make faultless decisions during a pandemic or any other major incident, but what happened here went outside normal parameters and should not be brushed under the carpet as so much is these days. As I said in an earlier piece, under today's regime a general inquiry would be a waste of time and money as the Jay report turned out to be.
The NHS has not even managed to give the majority of our elderly in care homes the booster they say is necessary - necessary is another argument - but for the most vulnerable it would appear the NHS is once again neglecting them; a deliberate policy? Who knows any more, but lessons certainly have not been learned, and older people never so undervalued and despised.
This appeared on the BBC site on Tuesday…
Why the NHS is struggling like never before
Lives are being put at risk with record long waits in accident-and-emergency units and 999 calls taking hours to be reached. The causes of this go beyond Covid - and with winter coming it looks set to get worse.
https://www.bbc.co.uk/news/health-59249409
They do spell out some salient facts, but at the same time ‘the never enough’ theme keeps cropping up. It matters not because there has to be a limit to NHS spending regardless of the ever-present begging bowl; the endless throwing of money at it has solved nothing.
You can guarantee if the relatively small difference in spending as with in France was made available tomorrow you would not get the French health service; the one thing that article says which is true is the NHS is in a downward spiral and has been for years.
There is no mention when staff shortages are put forward as a reason for poor service that as far as GPs are concerned a large part of the problem is part time working; oh no, that would go against the narrative.
So things are actually a lot worse than this chart suggests: 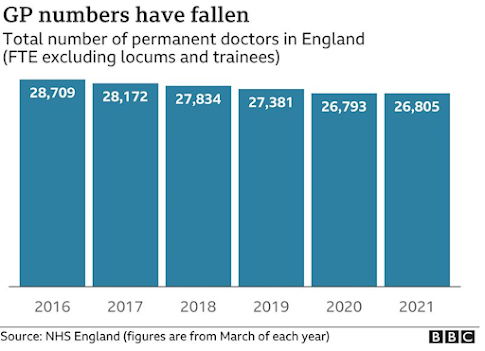 I am not repeating what I have said in the past on this situation it is farcical that it has been allowed to develop.
The political blame game wont cure it, only root and branch reform and that even if allowed will take time, it is currently a juggernaut out of control.
How on earth people believe the NHS is fourth in the world standings of health care is beyond comprehension, this includes my health area... 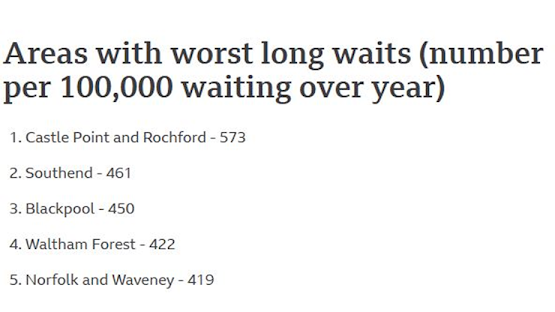 They dare not mention a large number are waiting for over two years and that is after waiting for a consultation. I would suggest quite a few will be dead before the NHS deigns to see them. This list is old news and still growing by the week.
The NHS suffers from the Oliver Twist syndrome: more is never enough, it never can be for any health service with the demands of today outstripping income. The NHS has to get back to core values and stop extending into areas it has little in common with and treatments that are costly but have little general value.
When the begging bowl goes out the impression given is we really are the poor man of Europe in the health department and we need to spend more. Looking at the figures shows that is not strictly true, no we are not top of the league table but we certainly are nowhere near the bottom, others are doing better with similar expenditure or less.
We are above the European average, so one must conclude something is seriously wrong with the way it is funded and run, but we already know that. Having the will to put all this right is what is missing, to call it a health service at all at the moment is a dubious title and it is still consuming vast amounts of tax payers' money for very little return; frankly it is a disgrace.

And the employment figures show we lag behind only Germany per capita and that is because of their social welfare being so much bigger than ours. Again we see large numbers of people employed yet a shortage of all front line medical  staff; it speaks for itself. 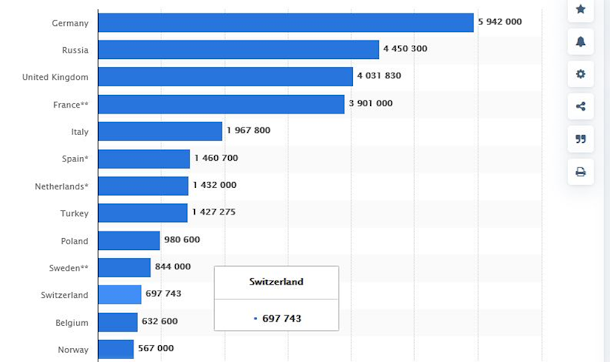 Even though we suffer from individuals whose use of the health service can only be described as a pitiful waste of resources we are not, if you can see one at all, outstripping anyone else in that area either, another myth. 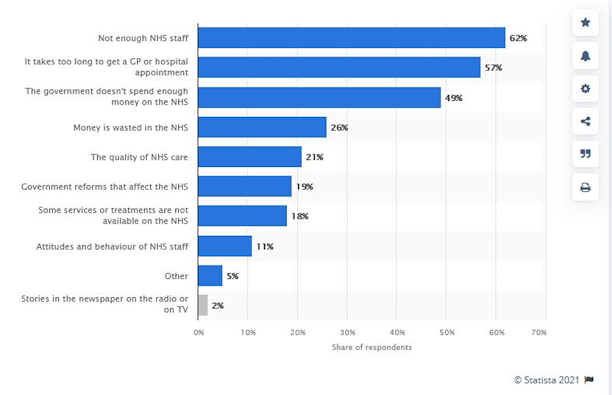 The continual demand for more money is based on claims that we don’t spend enough on healthcare. This is only true if you consider all and everything can be treated by the State and we should facilitate the NHS to that end. No health service can do that it would bankrupt the country and some are getting to that level.
Ours has it own peculiar problems well trailed here and elsewhere, but the facts show that yes we could spend more, we are not top of the spending league tables, but we are nowhere near the bottom and that is before the latest shovelling of money at it.
I would suggest the NHS has too many of the wrong sort of staff; how else are they short of front line medical staff despite being the biggest employer in Europe? The interesting statistic is the one on ‘some services are not available on the NHS’ but doesn’t state what: dentistry has almost vanished, eye care is going the same way and again has been like that for years. Or are they talking about cosmetic surgery and the like which apart from genuine cases should not be on the NHS anyway? How they can consider trans surgery at this time  when people are dying from cancer etc. because of a failure to treat, is beyond comprehension.
And government reforms: have there been any of any value?
I leave you with a Youtube video by comedian Andrew Laurence. If you don’t know him, be warned that the language in the opener is profane yo put it mildly, so don’t watch if easily offended, but no one gets to the point better than he does.
As he says at the end, be lucky… you’ll need to be.

According to this the number of UK GPs per capita fell from 67 in 2009 to 60 in 2018; it doesn't show the additional effect of the trend toward part-time working: