WINE: It’s That Time of the Year Again, by Wiggia 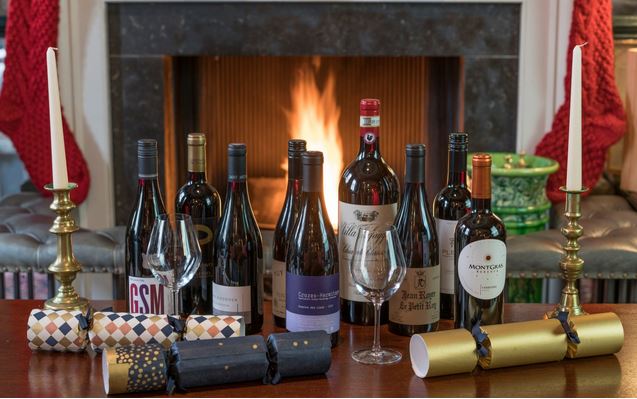 Bit late with my annual wine appraisal, but not too late for those who still need to stock up for the holiday period.

So what has been happening in the world of wine this year? Champagne and sparkling wine is still on the up, Sauvignon Blanc is still the number one white wine - though Chardonnay is having a revival (not that it went away) - and in reds all the major grapes are toe-to-toe in the popularity stakes.

I will start with the fortified wines as for many people Christmas is the only time these are purchased. The supermarkets have some very good bottles on their shelves in this category. Port: the single quinta bottles from Grahams and Warres that many retail outlets stock and often on offer are an amazing bargain, Tesco recently had the Grahams for £20 ! Grahams again have both the 10  and 20 year Tawny ports available this year and both are great examples of their style and affordable, and Morrisons ruby port at £7 is ridiculously cheap for such quality, don’t confuse this one with what grandma used to drink.

There is a whole new display in some supermarkets - especially Waitrose - of sweet wines with very good Sauternes, Marsalas, Vin Santo, Australian stickies (Muscats Semillons etc) on the shelves. Well worth a dip into if you would like a change.

Sherry has been going through a difficult time with the bulk sherry market collapsing but this has meant many better sherries being offered and some great cheaper ones. At the lower end of the price range two finos stand out: the own label versions from Waitrose and in many people's opinion an even better one from Morrisons. All the other Waitrose sherries are good and they carry some very good rarer ones like Palo Cortados plus fino en ramas, and some superb Olorosos and Amontillados from the likes of Lustau and  Gonzalez Byass. Waitrose are on their own in the supermarket stakes for sherry choice .

With the huge increase in sales of Champagne and sparkling wines almost everyone has jumped on the band wagon. Champagne is still the go-to choice for those who like the bubbly stuff yet it is no longer clear cut as to who supplies the best value in this category. If it is price that dictates, Cava and Prosecco rule the roost; some examples of both that will not break the bank but will give value for money include:


Just some of the better ones, but beware: there are some dire versions in those two regions!

A good alternative to both and Champagne are the Cremants from the Loire and the Jura:


Champagne itself has got some serious competition now from English sparkling wines. All of the English producers are making compelling wines to match and even surpass their Champagne equivalents - sparklers from Nyetimber, Hush Heath, Gusborne, Camel Valley, Henners, Ridgeview, Digby Fine English. All are top wines and under £30. For me I would forsake Champagne unless you have the funds for their top cuvees and go for the English sparklers; again the best choice is at Waitrose.

White grapes that we rarely see and new countries starting to appear here mean a wider choice to choose from. Gruner Veltliner is appearing more and more, this Austrian speciality has a lot of appeal to some people others not so much but worth a try for something a bit different.
For lighter fresher whites outside of sauvignon blanc there are a lot of the Italian bottles on the shelves with grapes like Falanghina , Pecorino, Grechetto with some improved Soaves at last appearing. Verdicchio which should be on the list still only has poor samples in the major retailers so don’t bother unless you go to a specialist wine merchant. Pinot Grigio is still top of the pops but the majority is still industrial quality rubbish - shame, as the better brands are very good: the Alsace version called Pinot Gris is a much better bet and many now stock some versions of this wine that goes so well with food.

Riesling is still the bridesmaid in popular sales, nearly all the best ones are with specialists, but there are Chilean and NZ and Australian versions and many others appearing all the time, Australian ones from the Clare Valley are very dependable, such as any of the Grosset range and Jim Barrys Lodge Hill plus from WA any of the Frankland Estates versions, also from Chile Cono Sur is dependable and one or two South African Rieslings are very good, the ones above are readily for sale.
Chardonnay has returned, it never went away but style wise it has changed,  not so much wood in evidence, lighter fresher styles are now the go to styles though some heavier ones are good regardless of the oak, it is a matter of balance, in your supermarkets look for these as good examples, there are many more:


A couple of other grapes worth trying:


And so to the current darling of the white wine world Sauvignon Blanc, there are hundreds so here is just a small sample of the many good cheaper ones,.NZ dominates this grape now but France and the Loire still provide a different and traditional take on the grape that many prefer.


Rosés have become very popular, not my cup of tea but that aside many get very good reviews these days. However I am not going to suggest any here as Christmas is not the place for these wines though there is no reason why not, and my sampling of them is very limited. so I pass.

With reds as Arthur Daley said “the world is your lobster” and it is, with seemingly all corners of the globe making great wines from different grapes. I am not going to go through all the varieties separately you will have dozed off before the end if I did that but what I will do is give an extended list below of the many great value reds I have drunk this year and are good to go for the festive season. Really at Christmas I expect most people would want to push the boat out a bit more, there's no Chateau Lafite, here just decent wines that are relatively affordable and not only taste good but will not disgrace any table.

Argentina has come along way in a short time as has all of South America so I will start with some Malbecs and Malbec blends from there.


Chile is more diverse than Argentina at the moment. Its signature grape Carménère is still a bit thin on the ground and variable in quality and style.

Santa Ritas Meddala Real Carménère is a very good buy and if you can find the Gran Reserva even better:

Down Under still supplies some great wines at fair prices despite the big brands taking the lion's share of the shelf space:


From New Zealand, mainly Pinot Noir which has become almost its second home. One thing I have to tell about NZ  Pinot is that the majority of the cheaper have better alternatives elsewhere. They lack ripe fruit, so be prepared to pay around £20 for anything decent.


South Africa is on a bit of a renaissance. A lot of very decent wines are coming from there now instead of those made in cooperatives:


The USA gets a pass simply because there is so little for sale. Most is purchased and drunk in the USA and what does make it here tends to be pricey. A shame as there are some magnificent wines being made there.

Back in Europe the choice is getting wider with eastern European countries coming on-stream at last and the likes of Greece making some cracking wines and Portugal going from strength to strength. The Greek wines are worth a punt as I haven’t had a dud yet.

Portugal has quite a few reds of note at the moment and most are very good value. Two from Waitrose:


The best selection is at the Wine Society but the society is a co-op and you have to pay to join before you can order. If you really drink wine they are well worth joining, it’s £40 but you get back £20 with your first order.

Spain, and one thinks of Rioja: plenty of poor ones around but plenty of good ones as well at all prices, other regions also supply top class bottles:


For Rioja look out for the wines of Muga, Roda, Telmo Rodriguez, and Vina Tondonia who have a large traditional style range and are very well thought of.

The wines from other regions include Ribera del Douro’s big red wines if you like that style and some very good Grenache/Garnacha from old vines. Lighter wines include those from Monastrell -these have proven very reliable and are extremely good value.

Italy has more grape varieties than anywhere else though many are rarely seen, but the great regions of Tuscany and Barolo produce wines up with the best of them and with prices to match.

Barolo is particularly difficult to find anything at a reasonable price but there are a few, though in general you have to know your way around in this area. Some of the satellite areas using the same Nebbiolo grape are more reasonable.

Waitrose have one at around the £20 mark: Terra da Vino Barolo Reserva  DOCG. It is a gold medal winner.

Otherwise look out for wines from the Lange region or lesser Barbarescos. This is a difficult area for value with all the better ones starting at around £40 and going north.

Tuscany is easier but again not cheap for the Super Tuscans or the top Brunellos or even the better Chiantis.

Cecchi Sagrato Chianti Reserva is fairly inexpensive and a good reliable winery, do not buy the difficult 2014 vintage - Waitrose

Also at Waitrose, they did win supermarket of the year for wine and it shows:


For cheaper Italian reds go south, there are some very good Negroamaros and Nero d’Avolas that are rich and plummy from Puglia and Sicily that will not make a hole in your pocket.

France considers itself to be the leading light in the world of wine with some justification despite unloading millions of bottles of plonk on us in the past, but times have changed and many of the regions that made that awful stuff now make first class wines, so the choice is huge.
Again unless you have deep pockets the best of Bordeaux, Burgundy and the Rhone will be out of reach but there are affordable wines in all three that are also value for money, a few below.


- they did have more in this category but have sold out.

I will not even attempt to suggest Burgundy. Nearly all is overpriced  and the better ones stratospheric in price. You can find decent versions but you would have to go to independent wine outlets.
The Rhone is a different matter, north and south of the region provides good robust and silky reds at all price points.

Sainsburys have a decent Sancerre Red. You don't see many of these, this one is worth a try if a lighter style is required.

This is but a fraction of wines available but I have been restricted to supermarkets and there is a lot more online and in the independent outlets, if you know a bit about wine it is worth searching out that way.

Never be frightened to try something different, you may well have a pleasant surprise.