WEEKENDER: Kamila Valieva - a Pawn in the Game? by Wiggia 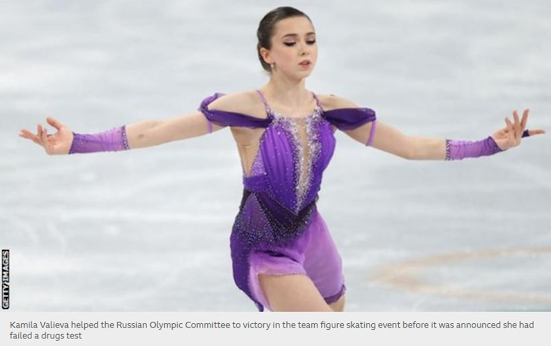 The young Russian figure skater caught out in the Olympics for drug use is currently getting a soft ride from both the IOC and the press. It cannot be a coincidence that her age is a factor in all this and the fact she is currently the world's Number One in her sport.

Should we care? Sport in general has not covered itself with glory when it comes to tackling difficult issues, such as footballers who insist taking the knee is a worthwhile practice, when the BLM is being exposed as an organisation that not only has ulterior motives away from race but is also a launching pad for the founders to fleece the public funds coming their way... millionaire row beckons.

Yet the players in our PL carry on as if this totally misguided gesture is actually having an effect on perceived racism, when in fact telling everyone every week they are racist just creates resentment for something that has been in decline for years; now, thanks to their agitation, it is headline news again.

It is and has been said that sport and politics do not mix, though the truth is politicians have used sport to their advantage for decades, and the fundamental principles of the Olympics as laid out by Pierre de Coubertin in 1898 have been jettisoned in favour of a flag-waving exercise. The Olympic movement is all about money and more of it, the amount poured into the IOC coffers to seal an Olympic bid are proof of that.

Nations and politicians all want to bask in the glory of having spent more than the last Games or World Cup to seal their place in history. The coming World Cup in Qatar  has to be one of the most ridiculous decisions by a sporting body in history: a country that has no interest in any sport other than importing a few Africans to boost their non-existent medal tally has only political reasons to bid for a major sporting event.

The truth about how the stadiums have been built with the equivalent of slave labour with a death rate that has been deliberately hidden away was revealed very early on but ignored by FIFA and all the countries competing including our own kneeling team; the manager who believes kneeling sends the ‘right message’ is very quiet about competing in Qatar - why could that possibly be?

When one looks back to the fuss about touring cricket teams during the apartheid years in South Africa and the banning of players who competed there, today's attitude reveals a gap in moral fortitude the width of the Grand Canyon. The difference is money: no money for a breakaway cricket tour in real terms, but huge amounts gained in Qatar.

It was ever thus.

Back to Valieva. The sympathy being shown to the young Russian who is competing with a faux Russian team with the name ROC - a pseudonym for loophole - is being seen in a very different light to those young east Germans years ago, part of the regime's systematic doping program. Russia along with China has been doing the same thing in recent times, not that the USA or others have clean hands in all this during the same period.

Having failed a drug test she should have been automatically excluded from competing. It matters not if she was coerced, though the route to fame and fortune often does not need much coercion; she failed a test and that should have been that. If she wins now, we will now have the sight of other athletes being denied their rightful place on the podium and another sport being forever tainted.

This is the IOCs wording on anyone caught doping in competition at Beijing:

'An anti-doping rule violation in Individual Sports in connection with an In-Competition test automatically leads to Disqualification of the result obtained in that Competition with all resulting Consequences, including forfeiture of any medals, diplomas, points and prizes.'

You would think from that it is pretty cut and dried, but apparently not. They do themselves no favours in using weasel words to allow Valieva to continue.

Coming from a cycling background, I am more than aware of how doping ruins sport, and have written on the subject in a different context before. There is little doubt all sports have indulged in forms of doping. Lax testing and a reluctance to match other sports' doping regimes has allowed hitherto ‘clean’ sports to prosper whereas under the surface it has been going on for years.

Allowing this young girl to compete, along with some decisions deserving of derision in the USA regarding endless numbers of sprinters being found to fail drugs tests yet re-appearing months later in competition, has resulted in empty stadiums. When all sports become tainted with the belief that ‘everyone is at it’ sport loses its value in society. Fraudulent behaviour in sport should never be seen as different from fraud in the wider world, and whether the fifteen-year-old girl was used or was aware of being doped is of no consequence, she should not be there; it perpetuates the whole ‘winning at all costs' mentality that pervades sport these days when money is king.

Also, we must never forget the long term effects that doping has on competitors in many cases, including deaths. During the EPO (Armstrong) era many cyclists died after blood clotting events caused by the drug; again, the real numbers were not issued officially as far as I know, but it was not merely one or two, and again athletes as young as fifteen / fourteen were testing positive. Somehow though, I cannot see it ever being eradicated. Gene therapy is already being touted as the next challenge and we cannot be sure it is not already being trialled; this is very complicated to test for and prove though no doubt in the future it will be possible, but yet again it continues the drug era into the foreseeable future. Money and drugs will always triumph over morals in sport, it seems; a sad indictment of our times.

An article in the Times shows the hypocrisy among national sporting bodies. This runner has just retired: 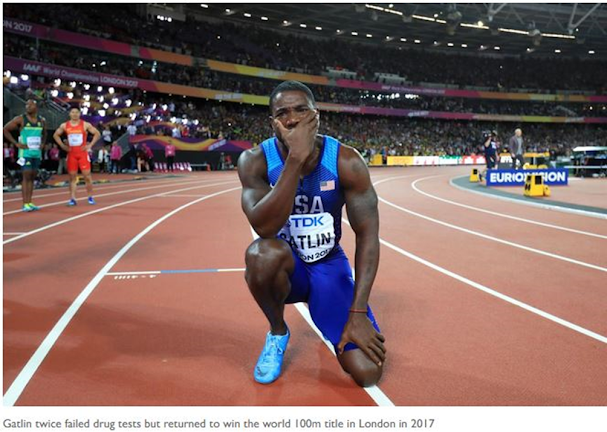 As this article is normally behind a paywall and I read it as part of my ‘free’ sampler I offer you this passage, which sets the tone:

'The US Olympic Committee was understandably disgruntled with the outcome of Kamila Valieva’s case at the Winter Olympics in Beijing. She is only 15, a “protected person” according to the World Anti-Doping Agency, and the latest chapter in Russia’s flagrant abuse of sporting ethics. However, that US Track & Field saw fit to post an image of Justin Gatlin alongside a starry-eyed emoji and the words: “Happy retirement to one of the greatest!” highlighted Olympic levels of hypocrisy as we sank further in the murk.'