WEEKENDER: They are really are taking the p*** now, by Wiggia

Yes, they're having fun at our expense: 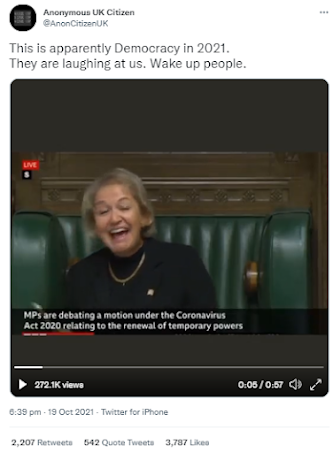 https://twitter.com/AnonCitizenUK/status/1450516987604578305
Not only disregarding a vote but hardly anyone in the Chamber for something this important, not important to them obviously, very different scenes when it comes to discussing their own pay rises or expenses. 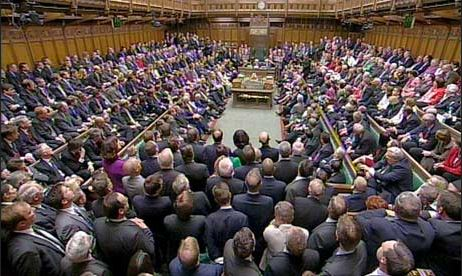 If nothing else, this government can be charged with not representing the people who voted for it. Hardly a thing they touch or mandate is what the people want. We have been by-passed by a group with an eighty seat majority and absolutely no effective opposition; in fact all the parties are interchangeable even if the lead characters are just a facsimile of what we once called leaders.
I can’t remember a time when so many friends, family, acquaintances, people I speak to in everyday life and elsewhere all believe we are led by self-serving cretins.
Never before have we seen so many globalists at the top table brazenly speaking of changes that must be made and our political appointees behaving like lapdogs. Johnson and Bill Gates should get a room together, how dare he give Gates over half a billion of our money towards world wide vaccines? With the track record Gates has in that area (India, anyone?) he should be shunned not feted, yet they all fall in line. It might be said Johnson is just returning the favour Gates made by financing big pharma-associated individuals and organisations here. 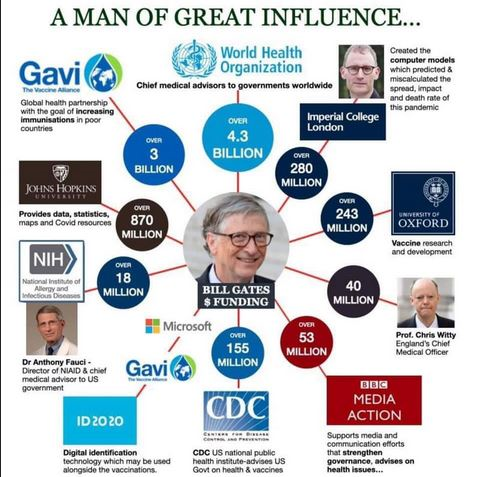 Soros continues to fund items in the UK after interfering in Brexit which he had no right as a foreign national to do, backing an anti Brexit organisation headed up by Gina Miller (who only wanted to make sure Brexit was legal?)  Why are these people allowed free rein in our matters, when the protocol is to remain out of other nations elections and referendums? Even Obama got in on the act; was there any response from our politicians? Not a peep.
https://en.wikipedia.org/wiki/Best_for_Britain
Meanwhile the climate change brigade are frothing at the mouth in case the COP26 meeting is a failure. Boris is already worried about this, but the news that his scientific advisor Sir Patrick Vallance has reiterated we must fly less, if at all, and stop eating meat to save the planet has perked him up no end.
Though doubts are emerging on the whole project in many quarters as the scales fall away.

Elsewhere more evidence no one knows what they are talking about has emerged as an old ‘scientific’ prediction has resurfaced. 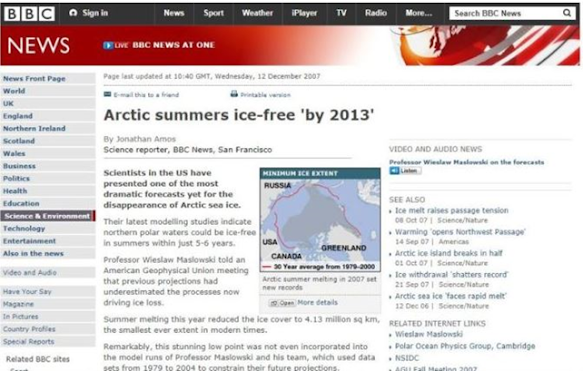 The professor responsible for this prediction made a journey to the Arctic to see how much had come to pass six years after his doomsday scenario and he had to use an ice breaker to get there….
'Just to put ice on the cake (sorry) it has been reported that the icebreaker supply ship is having trouble resupplying the Polarstern because the Arctic ice is too thick, at about 5 feet. It appears that the supply ship was using too much fuel breaking the non-existent ice and after getting to the Polarstern it would need refuelling in order to get back.'
No doubt the good professor planted more trees to counter his carbon footprint!
h/t to jimmysp at Going Postal: https://going-postal.com/2020/07/ice-station-zero/
We also have yet another branch of Extinction Rebellion spouting more nonsense: Animal Rebellion in an interview stated that using animals for foodstuff was not only harming the planet but immoral; a branch of PETA no doubt. The fact we have been eating meat since man evolved on this planet escapes them. Various claims are not justified including the amount of water needed to produce beef: the water is 'green' - it is recycled, it has no effect on drinking water.
And naturally all the by products of cattle are neatly side-stepped. When asked about milk, after a pause... ah, plant-based milk will replace it! It can’t of course and that would also mean no cheese, yoghurt and all the other food items that need milk. They are all mad, but you can guarantee that if the banning of red meat comes to pass not only will the main income of many countries, such as Argentina, be curtailed but you will see all other animal-based food products next in line for the same treatment.
It may well be as a nation we press on with this lunacy and ‘lead’ the world as our Premier thinks we will, but somehow I think we will be on our own in this; certain nations will never follow us down this virtual signalling dead end.
And yet again Boris goes along with this nonsense, no one calls him out.
It is striking that both the Climate Change Committee and the Treasury have refused to perform a cost-benefit analysis of the Net Zero project. Not really surprising: every real world article on the subject has shown huge costs against extremely vague promises; if the true cost to every man woman and child in the UK got out there would be or should be a rebellion - a real one.
Hydrogen is being pushed as an eco alternative to fossil fuels. These two charts show just how much electricity has to be used to make the hydrogen and also the amount of emissions produced from those two processes. As a commentator said it would be better to use the electricity in the first place. Battery-powered lorries, unless there is a revolution in battery design, add too much weight; that alone makes HGV using them uneconomical. 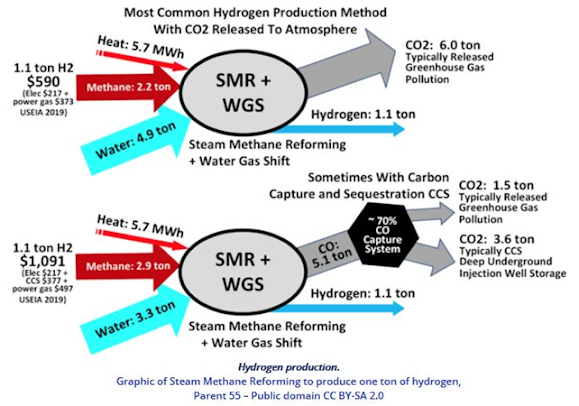 The max insulation required to make heat pumps work is not in any way doable for the bulk of the housing stock. The cost is way out of reach for the average family and offering £5000 as a grant to convert your gas boiler to a heat pump (£5000 of the same tax payers' money) is a joke. An Italian study has come up with a figure all in to make houses zero carbon: 100,000 euros.
A good explanation of why heat pumps are an expensive folly for the vast majority of properties:
Even the BBC could not ignore the obvious…

https://www.bbc.co.uk/news/business-58959045
Meanwhile MPs get us to pay for their driving in London emission zone:
And celebrities continue to outbid each other on how virtuous they all are. The likes of Emma Thompson's well trailed hypocrisy has been joined by Joanna Lumley of Eastern travelogue fame now telling us we should not fly as she jets off to Rome for a film. She claims accusations of hypocrisy are jealousy as she and other celebs offset their carbon emission with tree planting and carbon credits (whatever they are); I would love to see proof of all this tree-planting that celebs assure us they do, many if it is true would have estates like Sherwood Forest by now.
That’s different of course, and putting in his two pennyworth is Arnie, telling us much the same and how he has ‘recently’! converted his Hummer to battery power; a vehicle that weight with an equivalent battery is likely to drain the grid, and it probably cost him the equivalent of  a small house to do it. He also is slowly cutting out meat from his diet and is healthier for it he says, or his heart doctor says. Is he off-setting all that stuff bodybuilders used when competing, allegedly! They are all clowns.

https://www.bbc.co.uk/news/science-environment-59036814
There is nothing wrong with a balanced approach to cleaning up our act, but it has to be balanced against available technology so we don’t enforce poverty on the population. That technology is still in the future; you cannot bring it forward with unwarranted panic measures over something that is really not happening in a way that is any different from weather patterns over the millennia, and taking the Canute approach will not make the slightest bit of difference.
They really are 'extracting the Michael.'
And finally a snippet from the world of the 100+ genders, very funny but how many trans staff does Oxfam actually employ, or is one enough these days to remove items from sale or dismiss people for wrongthink?
We have taken the decision to withdraw the product Wonder Women Bingo as it has been brought to our attention that it is not in line with Oxfam’s values.’
Oxfam, which campaigns to end poverty and improve women’s rights, told The Mail on Sunday last night it had cleared the game from its shelves after transgender staff complained about it.
It added: ‘We took the decision to remove the game from sale following concerns raised by trans and non-binary colleagues who told us it didn’t live up to our commitment to respect people of all genders.’
https://www.dailymail.co.uk/news/article-10123867/Oxfam-drops-Wonder-Women-bingo-game-celebrating-inspiration-woman-including-JK-Rowling.html
Totally bonkers.

Your para between the idiotic rubbish from a forgotten 'actor', and the link to 'taking the Mickey just about sums it all up!

The ridiculous Cod26 bash will resolve nothing of course, it's pure grandstanding.