'I gotta horse !'
The death of racehorse trainer and legendary gambler Barney Curley last week reminded me that racing has always been peopled by larger than life characters like him (as well as others of a more dubious provenance.)
https://www.attheraces.com/news/2021/May/23/famed-gambler-and-former-trainer-barney-curley-dies-at-the-age-of-81
Curley's death marks one more sad step towards the uniformity of blandness that is one of the curses of modern life.

British racecourses are one of the few areas where the upper class and the working class meet on more or less equal terms. The middle class could never come to terms with racing and in fact The Guardian would not cover it until quite recently. 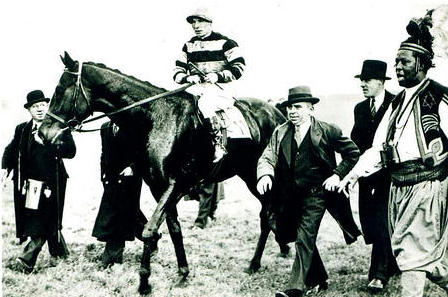 It wasn't always like that and one of the most famous and colourful characters was the man shown on the extreme right of this photograph who styled himself Ras Prince Monolulu. His real name was Peter Carl Mackay (1881-1965) and rather than being a chief of the Falasha tribe of Abyssinia as he claimed to be, he came from the Caribbean island of St Croix.

His father and brothers were horse breeders and trainers on St Croix and that is undoubtedly how he knew how to spot a winner in the racing world.

He made a living as a racing tipster and on racecourses up and down the country he would stand with a clutch of small brown envelopes in his hand and talk endlessly to attract punters.

I gotta horse
I gotta horse
God made the bees
The bees make honey
The soldiers do the dirty work
The bookies take all the money.

He became famous after tipping the horse Spion Kop to win the 1920 Derby, which came in at the long odds of 100-6, and from which he personally made some £8,500 (a huge amount of money at the time) and also gifts from grateful punters who had followed his advice.

And always the non stop yarns:

I know an outsider with four legs, one leg at each corner, this one will cross the winning post and the others will be arrested for loitering!

He wrote his memoirs in a book entitled "I Gotta Horse" but whether those memoirs are reliable or not is open to question since he did talk a lot and did contradict himself a lot; all part of his showmanship of course.

His death in 1965 added another myth to the story of his life. Jeffrey Bernard, another colourful character who wrote the Low Life column in the Spectator and also worked as a racing journalist, visited Monolulu in the Middlesex Hospital to interview him. Bernard had brought with him a box of 'Black Magic' chocolates and offered Monolulu a 'strawberry cream'. Monolulu subsequently choked to death on it and Bernard bade him farewell. He later declared that the story was untrue but it does add to the legend. 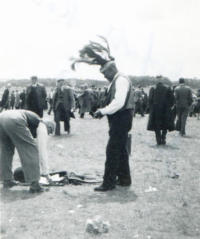 To add a personal note: this photo was taken by my father on his old Box Brownie and has the date June 1950 on the back. When I was old enough (i.e. still in my pram) I would go with my family to the races. And when I was a bit older I met Prince Monolulu and to a small boy he was a fascinating sight and sound. A very large black man with coloured ostrich feathers in his hair.

I don't know if my father ever bought one of those mysterious small brown envelopes but I remember on occasions he would say "right, I'm playing with the bookie's money now" as he folded some notes and put them into his pocket. I blame my father and Prince Monolulu for my everlasting devotion to the semi-anarchical world of the turf.

To get some idea of his 'style' here he is with Groucho Marx on the US show 'You Bet Your Life' and for once Groucho is lost for words! (from 15:56 onwards )

He made a second appearance with Groucho Marx the following week and talked more about his life (from 3:55 onwards)

And more, this time from Wiggia -

This has several pages about Prince Monolulu and his life, a lot of his tales are the ones he told Groucho in the second clip above. They may or may not be true but if just half of them are loosely based on the truth then he certainly had a colourful life!