Some memorable events (via Wikipedia):
6 November: 'Heinz Felfe, West Germany's chief of counterintelligence for the Bundesnachrichtendienst (BND), was arrested by his own agents. Felfe, a former Nazi, was discovered to have been passing secrets of the American CIA to the Soviet Union and to East Germany since 1959, revealing the identify of more than 100 CIA agents in Moscow.'
A 2013 (German-language) film about Soviet penetration of the German secret service is shown below.
See also:
7 November: 'The most damaging blaze in Southern California history, up to that time, destroyed 48 homes one of the wealthiest areas of the United States in the Hollywood Hills, including the houses of actors Burt Lancaster, Zsa Zsa Gabor, and Joe E. Brown.'

Also on 7 November: 'France secretly set off its first underground nuclear explosion, and its fifth overall since joining the nuclear club on February 13, 1960. Confirmation was not given until nearly three weeks later.'
9 November: 'Brian Epstein saw the Beatles perform at the Cavern Club for the first time, and signed them to a contract by December 10.'
The above was recorded by Granada TV at the Cavern Club in Liverpool on August 22, 1962. (The next day John married Cynthia Powell.)
https://www.beatlesbible.com/1962/08/22/live-cavern-club-liverpool-218-beatles-first-television-appearance/
10 November: 'What would become the landmark U.S. Supreme Court case of Griswold v. Connecticut began nine days after Estelle Griswold of the Planned Parenthood League and Dr. C. Lee Buxton opened a clinic in New Haven, providing the means for birth control to patrons, in defiance of a Connecticut state law prohibiting the use of "any drug, medicinal article or instrument for the purpose of preventing conception". Ms. Griswold and Dr. Buxton were arrested and would take their challenge to the law all the way to the United States Supreme Court, which would rule in 1965 that laws that infringed upon marital privacy were unconstitutional.'
UK chart hits, week ending 11 November 1961 (tracks in italics have been played in earlier posts)
Htp: Clint's labour-of love compilation https://www.sixtiescity.net/charts/61chart.htm 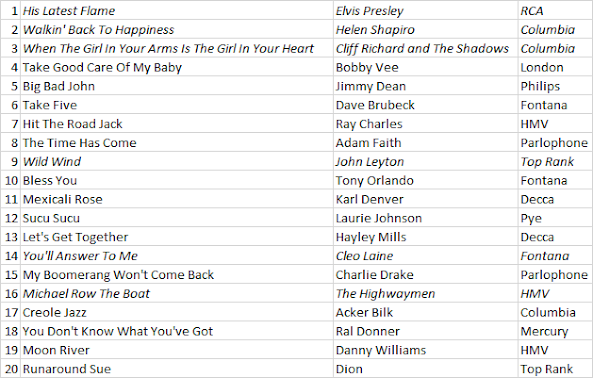