“Insanity is repeating the same mistakes and expecting different results.” - often attributed to Einstein but the quote first appeared in a pamphlet by Narcotics Anonymous in 1981

On 23rd March 2020, the Prime Minister announced the first 'lockdown' of the UK in order to prevent the spread of Covid19. This was to be for three weeks and the slogan he used to validate this unprecedented measure was "Stay at home, protect the NHS, and save lives."

There was a second 'lockdown' announced in October but trying to establish exact dates for these first two 'lockdowns' has become increasingly difficult, the announcements together with the applicable rules have been extremely vague and they have usually been couched in emotional language.

And now we have another 'lockdown' which may or may not last for three months. Because this is the third such restriction on the population and seemingly more strict than the others, it is safe to assume that the first two did not produce the required result; protect the NHS and save lives.

In accordance with the definition at the head of this page, is it safe to assume that our politicians and their advisers are insane?

If they are not insane then it is obvious that they have no idea what to do next to 'get the virus under control' (their words not mine) but that in itself is a clear denial of the reality of the nature of viruses. Repeating the lockdown and the other restrictive measure is not going to achieve anything and so it is time for the advisers to stand down and to allow other medical specialists to bring some fresh thinking and fresh ideas in order to end the perpetual failures we have endured so far.

Here is a headline from the Daily Mail dated 27th February 2018: "Killer flu outbreak is to blame for a 42% spike in deaths" https://www.dailymail.co.uk/health/article-5440785/Killer-flu-outbreak-blame-42-spike-deaths.html

"It is the highest number since records began in 2006 - and only the second time it has breached 60,000.
'Circulating influenza' was blamed in the report, released today and compiled using data of deaths from each region."

The article goes on to say that 2015 and 2010 also produced an excess of deaths from influenza compared to the average. What we have with the current covid crisis should not be seen as something unprecedented especially as the figures being announced are not exactly reliable. [see below] Apparently all deaths are covid related these days and flu deaths have disappeared!

So in the winter of 2017/18 there were 109,298 deaths as recorded above plus those which would have occurred in February and possibly in the months on either side of the 'winter' months.

If Covid19 is a 'deadly killer virus' as is declared repeatedly by the politicians and their main 'expert' advisers then how would they describe the influenza of 2017/18?

The hyperbole reached peak insanity in June last year when the Inter Parliamentary Union (no I had never heard of them previously either) boldly declared "The COVID-19 pandemic represents the greatest threat to humanity since World War II" and that phrase has been repeated by politicians and 'experts' on many occasions.
https://thenews-chronicle.com/covid-19-pandemic-represents-greatest-threat-to-humanity-ipu/

One of the reasons being given for the recent 'lockdown' is to prevent the NHS from being overwhelmed. That is not a very convincing reason because the NHS is overwhelmed every winter! 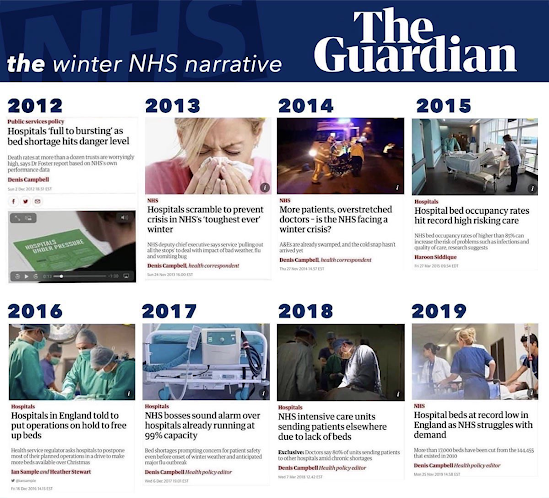 I have checked the map for my area and it tells me there have been 5 deaths, four in March and one in November. Difficult to find exact population because the ONS map as shown is not the same as the actual boundaries but I believe the population is around 7000 so the fatality rate is 0.07%.

I checked also the adjacent boroughs and the percentages were similar with the majority of fatalities occurring in March and April.
https://www.ons.gov.uk/peoplepopulationandcommunity/healthandsocialcare/causesofdeath/articles/deathsinvolvingcovid19interactivemap/2020-06-12

On the evidence of the map from the Office Of National Statistics the covid virus had more or less died out by May or June of 2020.

Why have the media headlines and Government announcements not reflected that? Why are the media continuing to press the panic button in what looks like a histrionic attempt to prolong this 'pandemic'?

Why is the Government and its advisers continuing to play 'mind games' with the public?

They are questions without answers until you remember the famous (or should that be infamous?) Milgram Experiment.

"In the 1960s, Yale University psychologist Stanley Milgram famously carried out a series of experiments that forever changed our perceptions of morality and free will. The subjects-or "teachers"-were instructed to administer electroshocks to a human "learner," with the shocks becoming progressively more powerful and painful.

"Controversial but now strongly vindicated by the scientific community, these experiments attempted to determine to what extent people will obey orders from authority figures regardless of consequences."

Milgram's conclusions were summarised in his book 'Obedience to Authority'
https://blackwells.co.uk/bookshop/product/9780062930828?gC=5a105e8b&gclid=EAIaIQobChMI89q9s4mU7gIVxITVCh2NmA7hEAQYAyABEgJ-fvD_BwE

We know from newspaper headlines and the results of opinion polls that a majority of people are now demanding more and harsher lockdowns. The behavioural psychologists among the members of the SAGE committee would or should have known about Milgram and must have known what the result would be from the scare stories of daily death tolls and overwhelmed hospitals. The population or a large part of the population is now in a constant state of fear, or so it seems from all the letters to the press etc. Was that an unforeseen consequence of the Government's handling of the 'crisis' or was it a deliberat attempt to subjugate the people?

“The welfare of the people in particular has always been the alibi of tyrants, and it provides the further advantage of giving the servants of tyranny a good conscience.” - Albert Camus

I was reading yesterday Michael Bentine's opinions on how TV and cinema are powerful propaganda tools and can be and have been used to manipulate people.

The continuing propaganda about covid is undoubtedly having a debilitating effect on people's immune systems, the 'worried well' are inducing psychosomatic illness in what were previously healthy bodies.

I said to my chiropractor last year "why doesn't the NHS encourage 'psychosomatic wellness'? and he replied almost instantly "There's no money in it!"

The Government inspired propaganda is a very dangerous thing to do and, in the context of Bentine's book, are these people evil or just insane?
https://www.amazon.co.uk/Door-Marked-Summer-Michael-Bentine/dp/0246114053

Wiggia adds this from Godfrey Bloom:

'Let me start with the main statistic, the most important of all yet barely ever mentioned in MSM which like government is obsessed with case numbers, a monstrous irrelevance. The Office of National  Statistics confirms the numbers of deaths from covid19 of people with no previous health issues is circa 2000.'
https://opendialogus.co.uk/godfrey-bloom-a-covid-debrief/

I've watched with interest the effect of the ramping up of the covid propaganda over the last 2 months. I have an elderly mother who is pretty savvy, but her only source of information on what is going on in the world (other than me) is the MSM. And I have watched her become more and more anxious about covid, as the drip drip of negativity oozes out of the press and the TV news. I have tried to point out all the facts you outline above, but its hard to counter emotional threats with hard facts. We really are being manipulated by psychological techniques, whether for honestly mistaken reasons or actively malign ones I could not say.

My wife works in primary health care in the US.

In the past few months, she has gone from 10% of her patients with COVID to about 60%. About 1/3 of those have ended up hospitalized as a result, several have died. Those who became very sick are suffering for months afterwards, with difficulty breathing, walking and thinking.

This is not a typical influenza.

Without being an expert, whatever that is these days, the informed layman is up against it when giving an opinion however well researched it is if the reader believes the propaganda pumped out on a daily basis.

But certain facts do emerge, some like the deaths from non Covid related illness have seemingly disappeared since around August, but the warnings of eventually more deaths from neglect of those ill has been voiced by more than a few who are in a position to know, and the numbers are relentlessly going up as the lock down shuts everything else healthwise down, there is no balance.
We are now in tier four, our ONS map shows roughly 8000 inhabitants and not a single death since the virus started, my wife's doctor at the local surgery with 14,000 patients on its books, told her in August they had not had one single case of a patient with the virus to that date.

Flu, that is the normal winter flu has mysteriously disappeared this winter is it the lock down, who knows nobody says anything about it.

Meanwhile over 800,000 people have lost their jobs officially, the Times has stated in the business section that 250,000 small businesses, employing under fifty people will either fail or drastically reduce their staff when the support ends.

Meanwhile with the average age of death being 81.4 years I as a male if I catch the virus is being given an extra year to live or something like that, who believes anything any more.

I found this after my comment above, I had seen the figures elsewhere before but never kept them, what is worrying is they have not been updated, one could say for obvious reasons, this long term will dwarf the impact of the virus.

Again, in the US, many US cities, including the whole of Southern California, the Dakotas, Henderson (the upper-end living area near Las Vegas) have run out of ICU beds. Many of those same hospitals are using large numbers of refrigerated trucks to store bodies, because their morgues are full.

These are not just people over 80 going into large trenches used for mass graves.

It is the same in the UK (although not all areas). Personal accounts from people who work in health care, especially nurses tell the truth of the matter. I have heard many such personal testimonies in an online forum that I belong to (walking related). These experiences are not reflected in the media which normally focuses and graphs and data without context and sources.

One lady that I know (a former nurse) said she had never experienced anything like this before in her lifetime.

Our local hospital is stretched at the best of times. On one occasion when I had taken my mum to A&E I had to wait ages for her to be assessed to see if she needed to be admitted to hospital. She was given some food but I had to venture out into the hospital to get some for myself. I was alarmed to see a queue in the corridor with paramedics with their patients waiting to be admitted to hospital.

Yesterday (in a local community forum) someone posted a picture that they had taken that day of a long queue of ambulances waiting to get their patients into the aforementioned queue. I have not seen anything like that before.