Old Age and Beyond, by JD

Bruce Charlton asked the question recently "What is the purpose of old age?"
http://charltonteaching.blogspot.com/2019/04/what-is-purpose-of-old-age-romantic.html
He asks the question in the context of his observations that so many people are trying to maintain their youthfulness by various means, by having facelifts or engaging in vigorous (and inappropriate) exercise, by behaving as they behaved in their youth with drinking and partying or trying to climb Mount Everest. That last one is not a good idea as we have seen recently.

He partially answers his own question when he observes that these efforts to stay forever young are a fear of old age and ultimately a fear of death, which is a recent phenomenon. The Victorians had no such fears or doubts, they accepted it as a fact of life and that acceptance lasted well into the 20th century for most people. All four of my grandparents died in their own homes with family members at the bedside, the last one in 1973.

But there are far worse fates than death - 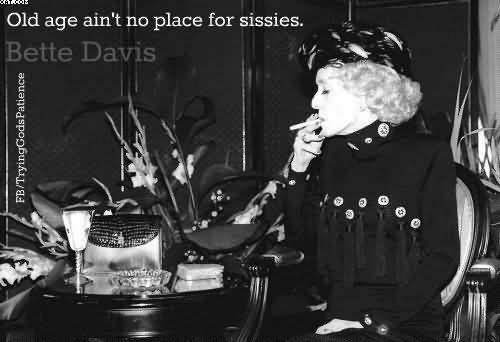 Bette Davis was correct because old age brings with it new and unwelcome problems. We all begin to creak and crumble and fall apart with aching limbs, arthritis, rheumatism etc. In my case it is sciatica and a mysterious ache in my right foot which turns into pain if I walk too far. Also I find that I can no longer do the things I used to do; climbing a ladder is now inadvisable, running up or down stairs is no longer an option, and as for moving furniture - is it a lot heavier than it used to be? And then the unspoken difficulties like trying to cut your toenails or struggling to remove the tops from jars. Rescuing food from its packaging has undoubtedly prompted an endless stream of profanities on a daily or weekly basis up and down the land!

But we have to adapt to the infirmities and the difficulties of old age because the body lets you down, eventually.

Old age brings other worries of course. Not least who is going to look after us all when we need it. The latest statistic I can find (for 2017) shows almost three million over 65s living alone. But that is another story for another time. The question here is 'what is the purpose of old age' and the cold hard truth is that old age is a time for facing up to the inevitable end of this life and to prepare ourselves for death and transition to the next life. The poet John Donne (1572 - 1631) expresses it here very clearly-

"Since I am coming to that holy room,
Where, with thy choir of saints for evermore,
I shall be made thy music; as I come
I tune the instrument here at the door,
And what I must do then, think here before."

If you will allow, I shall burden you with my own understanding and how I have approached old age and death. My father was 58 when he died after a short illness and that was too soon but we, the family, had to accept it. Thus began my own search to try to make sense of it all and I rapidly became aware of my own mortality and very quickly came to terms with the fact. So life went on but with a slightly different perspective on anything and everything. Like Bruce Charlton, I would read a great deal and travelling and working in other countries and cultures added fresh insights into how other peoples dealt with these things.

Many years later a very close friend of mine had a severe stroke and was left unable to talk and was in a wheelchair having been paralysed in her right arm and leg. I say close friend but in fact she was by my side when my father died and was very much the shoulder to lean on. After almost five years in that condition she died, coincidentally on my father's birthday. Her sister said to me "she didn't want to be here any more" She had decided to go and she did.

It is difficult to explain how I felt at the news of her death because the feeling was and is beyond words. She was here and then she was not here. Science holds that energy can be neither created nor destroyed so what happened to her life energy, that which animates the body? Where did/does that go?

The effect on me was profound and lasted a long time and may well have been a contributory factor in my subsequent epilepsy. And then one day, a few years later, she came back! I know that sounds absurd and you can dismiss it as wishful thinking if you like but I know what I felt and it was not brought on by thinking about her. But it happened and it happened during what I now understand to be a lucid dream. She was here with me and it was real, in fact it was much more real than everyday reality in a way which cannot be explained. It was real but there was no 'great revelatory message': the content was fairly mundane, as in real life. In a way it was shocking because it was beyond any normal experience, bewilderment is the best word to describe my feelings. I had some very long conversations with the neurologist at the hospital but she could not offer any explanation. She knew of the concept but had little experience of it with patients or among colleagues. Science is, after all, just another belief system, a secular faith.

"An experience of the sort which may, without justifiably stretching the meaning of the word, be called mystical may happen to anyone, sometimes quite unexpectedly; but when it occurs it is clearly recognizable. It may happen only once in a lifetime; but, when it does happen, it brings an illumination and a certainty which can rarely, if ever, be reached by the rational consciousness and may change the whole tenure of a life."

And change me it most certainly did. I still cannot articulate how and why it has changed my outlook on life, I just know that it has. For a time I genuinely lost the will to live but it was replaced by a feeling of being more alive than before. Over recent years I have relaxed into a sort of low level reverie and now have a form of hyperaesthesia making colours more vivid and visual awareness is heightened such that I am aware of things actually vibrating, usually described by poets or art critics as shimmering. I have even tried to depict the vibrating nature of reality in a few paintings. Perhaps I am just going mad, I don't know but it is a delightful, divine madness.

It may be that we need some kind of shock or a 'revelation' to remind us why we are here. If it happens in old age it helps to focus the mind on what is important and to realise that there are more years behind us than ahead and this is not necessarily a bad thing.

“To die will be an awfully big adventure.”
― J.M. Barrie, Peter Pan

And finally from Bob Dylan a beautiful meditation on our final years. As always with Dylan the meaning is ambiguous and we can read into it what is most meaningful for us. There is an interpretation of the song on Dylan's website and the writer speaks of a Taoist concept of “Darkness within Darkness, the way to all understanding” but I prefer the words of the metaphysical poet Henry Vaughan (1622 - 1695) -

N.B. My reference to science being a belief system, a secular faith is not some throwaway insult. In F C Happold's book there are quotes from St Augustine of Hippo, Nicolas of Cusa and Max Planck all saying exactly the same thing.

Good reading and great insights, JD - thanks! Wandering into old age proper is scarily interesting....kind of. Gotta keep putting one foot in front of t'other. :-)

An excellent piece. I am now at the stage of being comfortable with the idea of death. As motor functions start to become something of a challenge, manageable so far, and the old noggin not what it was it seems a natural progression of things.
My father always said he didn’t want to end up in a rest home or whatever they call them, but that is where he did. He wasn’t there mentally, so there was that.

As I understand, you had a direct conviction of survival of the soul after biological death, and this led to a major and positive change in attitude to ageing.

Your story seems to confirm my impression that the mainstream modern view that death is an annihilation prevents any coherent way of dealing with death (and ageing) culturally.

I think most people have lost sight of how bizarre our 'normal' beliefs have become - and the way that so many people simply assume asif a fact that death is annihilation, is almost unique in world history, and still rare in the world as a whole. So the modern belief is very unnatural, and may verge on insane - or may tend to make people behave in an insane fashion.

This would be understandable, since if death is annihilation it does render mortal life meaningless - and leads towards an ethic of extreme selfish short-termist hedonism. The fact that (surprisingly!) more people aren't *completely* like that, suggests that there is a deep and denied assumption in many hearts that 'death is not the end'.

But when old people cannot or will not even think about death as a transition transition, then they cannot really be old - and will experience ageing purely negatively, as a terminal illness.