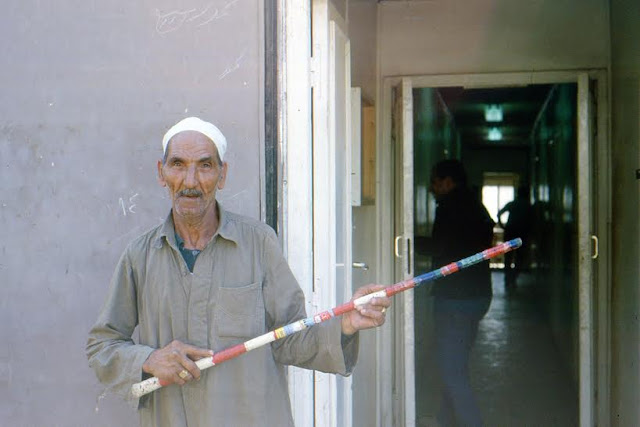 The gentleman you see in the photo came each evening onto our power station construction site in Cairo. He was, I think, our night watchman but his main job seemed to be to deter the stray dogs who would probably try to take up residence. I worked for a Spanish company, the lead engineers were American and the boilers were being installed by an Italian company. When this chap realised I wasn't any of those nationalities but a product of good old Blighty he said "Ahhhh!! General Montgomery, very fine man!" That was followed by a display of rifle drill using that cut-off ranging rod he carried and a snappy salute! He had very little English so I couldn't have any conversation with him but he did that every time he saw me. The stray dogs by the way became a bit of a problem and we received an official 'site instruction' to have them all shot. When the girls in the office in Madrid saw the instruction it was all 'oh no, poor little dogs' but you could never be sure if they carried rabies or not. The dogs that is, not the girls.

Working in Dubai in 1976 there was a local in the office whose job was to make the tea and coffee. Again, no English so I learned the words 'chai' - tea, and 'halib' - milk, 'sukkar' - sugar and, of course, 'shukran' for thank you. One morning he was marching up and down the corridor shouting 'very good, very good' and giving the thumbs up to all and sundry. He had one hand over one eye and motioning with the other hand a sort of semi salute. What?

Eventually somebody managed to translate this strange message. It was the day after the hijacked Air France plane was rescued from Entebbe airport. So the hand over one eye was to indicate Moshe Dayan and the strange motion of the other hand was meant to indicate a plane taking off. He was celebrating the rescue of the passengers by the Israeli special forces. That may be hard to believe given the alleged animosity between Jews and Moslems. But it illustrates what I said in a previous post, that the people in the Middle East are tribal above all else and they admire a strong leader who will be the protector and 'father' to the particular tribe or clan whatever you wish to call it. And they will admire and respect a strong leader in a different tribe, clan, nation etc. It is how they have managed to live in relative harmony over thousands of years. Same for the man in Cairo: he admired and respected Montgomery in the same way that Monty and Rommel had a mutual respect.

The tribal idea was evident in other ways. When I had to wander out to workshops or the markets to source materials I would ask about other suppliers or artisans. Very often the answer would be 'Ah, yes he is my cousin'. The tribe is a family in that way.

Another aspect of the same thing is the hospitality and respect for strangers/visitors which is necessary in a desert climate where travellers will camp at an oasis and differing tribes must get on with each other or perish. And that climate can be very harsh and unforgiving. One venturing away from the coastal area of Doha, Qatar it didn't take long to see how harsh the desert can be. The air is so dry it is impossible to breathe. We were all wrapping our heads in towels with mouths covered over just to prevent sweat evaporating and to have the moisture we breathe out retained to assist with breathing in. If you have ever wondered why Arabs are always fully covered from head to toe in such unbearably hot temperatures, that is why.

It was worth it, by the way. The interior of Qatar is spectacular with the wind-carved limestone rock formations: