At #7 this week, the now classic 'Take Five' by Dave Brubeck:

... and to a rapturous theatre audience here:
Some memorable events (via Wikipedia):
4 December: 'President Kennedy authorized the U.S. Department of Defense to commence of Operation Ranch Hand, the defoliation of the jungles of South Vietnam. The first run was on January 12, 1962, and the last in February 1971.'
On the same day: 'An agreement on maintaining the neutrality of Laos was reached at the 14-nation Laos Peace Conference being held in Geneva.'
5 December - Berlin Crisis and the Berlin Wall: 'The largest ever escape from East Berlin, to the West, was carried out by Harry Deterling, a 28-year-old train engineer, after he and co-worker Hartmut Lichy learned that there was still an open rail connection at Albrechtshof, one-quarter mile from the border, and that East German authorities were preparing to block it. Deterling's wife and four children, his mother, and 13 friends boarded at Oranienburg, and four others got on at Falkensee. Deterling and Lichy never stopped at the Albrechtshof station, and rushed the train past startled border guards. The train's conductor, and six passengers who hadn't been in on the plot, elected to return to East Germany. The government tore up the tracks the next day and put up barriers, and there were no further escapes by train.'
6 December - the Space Race: 'NASA announced that the United States would not put an astronaut into orbit before the end of 1961, thus ending the possibility of matching the Soviets in the same calendar year. Lt. Col. John Glenn, the space agency said, would not be launched into space until at least January.'
8 December: 'Brothers Brian, Dennis and Carl Wilson, their cousin Mike Love, and friend Al Jardine, known as "The Pendletones", saw the release of their first recorded song, called "Surfin'" (with "Luau" on the "B"- side). For the single, record distributor Russ Regen renamed the group, The Beach Boys, and their first song peaked at #75 on the Billboard Hot 100 chart.'
They had 'adopted their name in honor of the surf uniform of the day: Pendleton shirts worn over tee shirts with khakis.' - https://blog.pendleton-usa.com/2019/03/29/before-they-were-the-beach-boys-they-were-the-pendletones-3/
On the same day: 'Portugal's ambassador to the United Nations appealed for help from the UN Security Council, reporting that 30,000 troops from India were massing along the border of the Portuguese colony at Goa, and that seven ships from the Indian Navy were approaching Goa's coast.'
9 December: 'At the National Stadium in Dar es Salaam, the former British colony of Tanganyika gained independence, with Julius Nyerere as its first Prime Minister. Sir Richard Turnbull, who had been the British governor, served as the first and last Governor-general of Tanganyika until the nation became a Republic on the next Uhuru Day, one year later, with Nyerere as President.
Prince Philip, the husband of Queen Elizabeth II, appeared on behalf of the United Kingdom. At midnight, the British territorial flag was slowly lowered as a record played God Save the Queen. The lights were then turned off, the new national anthem, Mungu Ibariki Tanganyika (God Bless Tanganyika) was played as the new flag was raised, and the lights were switched on again.
In 1963, Tanganyika would merge with Zanzibar to become Tanzania.[
UK chart hits, week ending 9 December 1961 (tracks in italics have been played in earlier posts)
Htp: Clint's labour-of love compilation https://www.sixtiescity.net/charts/61chart.htm 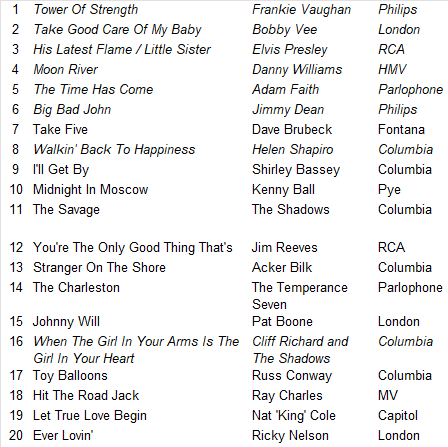 Haven't got a record player though...

Worth getting one now, vinyl is in again!