The original of this piece was first posted on 24th April 2011 at Nourishing Obscurity. What follows is a substantially revised and updated version based on new information and personal experiences during the intervening nine years. 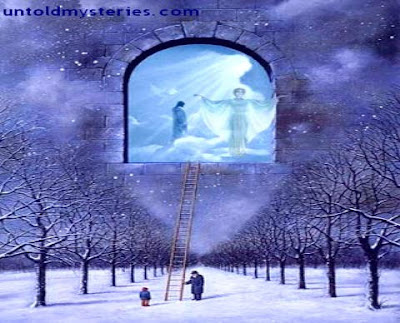 "The undiscovered country, from whose bourn
No traveller returns"

The title is taken from Hamlet's famous soliloquy in which he contemplates life and death and whether he is up to the task of avenging his father.

Shakespeare uses this passage to illustrate Hamlet's confused state of mind as he ponders how, or even if, he can carry out this task. He is clearly not thinking straight because the play opens with him being visited by the ghost of his father and that is a return of sorts.

If Hamlet had read Plato he would have known of the story, recounted in the tenth book of The Republic, in which the warrior Er, killed in battle, returns to tell of the nature of the afterlife, and the consequent importance of wisdom and justice to the long-term health of the soul.

Why is that? Are we so enthralled by scientific materialism, the only valid belief system acceptable to the modern mind, that nobody dares to think the unthinkable - what if it were true?

In 1975 Dr. Raymond Moody, a psychiatrist, published a book called "Life After Life" He interviewed 150 people who had experienced what he called Near Death Experiences. (The book went on to sell more than 13 million copies) The conclusions drawn from the book suggest that the myth of Er was no myth.This below is a brief excerpt from a 90 minute interview of Moody by Jeffrey Mishlove.

Since that time many other medical professionals, particularly those who deal with cardiac arrest and other trauma, have made similar studies and reached similar conclusions. Cardiologist Dr Michael Sabom has written three books on the subject. In his books he gives many examples of people who have had a near death experience or NDE.
http://www.ukapologetics.net/07/sabom.htm

Dr Bruce Greyson of the Department of Perceptual Studies at the University of Virginia has also done a great deal of research on the subject.
https://www.theepochtimes.com/interview-bruce-greyson-on-researching-near-death-experiences-at-the-university-of-virginia_1368200.html

Dr Kenneth Ring has also written a book after many years of research - https://www.goodreads.com/book/show/2201476.Heading_Toward_Omega

“NDEs are quite varied, but the consistency of the NDE elements (OBE experience, tunnel, light, meeting other beings, etc.) is striking. There is no plausible biological explanation of NDEs. There is no other human experience so dramatic, shared by so many people, and so relatively consistent in its elements. The preceding suggests faith in the validity of NDE accounts is the most reasonable conclusion from the evidence.”

The OBE or out of body experience is not new.
Here is St.Paul's account of his visit to heaven (in 2 Cor.12):

1 It is not expedient for me doubtless to glory. I will come to visions and revelations of the Lord.

3 And I knew such a man, (whether in the body, or out of the body, I cannot tell: God knoweth;)

4 How that he was caught up into paradise, and heard unspeakable words, which it is not lawful for a man to utter.

Another account of a journey to the post-mortem world is found in Bede's Ecclesiastical History
https://www.gutenberg.org/files/38326/38326-h/38326-h.html
in which he tells of Drythelm's 'death' and awakening the following day-
http://escholarship.org/uc/item/8pz3g97j

A recent account of the out of body or near death experience comes from Dr Eben Alexander whose own NDE occurred in 2008. What makes this account different is that Dr Alexander is a consultant neurosurgeon and thus has a great deal of knowledge and practical experience of how the brain and mind functions or how it is presumed to function in theory. His own experience led him to question his own previous understanding of neurology. He set down his 'journey' and subsequent thoughts in the book 'Proof of Heaven.'
https://www.amazon.co.uk/Proof-Heaven-Neurosurgeons-Journey-Afterlife/dp/0749958790/

There is a great deal more to say about this, especially how research into the more bizarre aspects of quantum theory appear to validate the idea of reality being nothing more than an illusion, the implications of which are that life and death are illusions also

In the book 'Irreducible Mind' https://www.goodreads.com/book/show/7879392-irreducible-mind the authors draw the conclusion that quantum theory has overturned the traditional understanding of Newtonian physics and according to Henry Stapp "...the fundamental ideas of classical physics were not just limited but wrong!" (page 611 of the book if you wish to confirm it.)
https://www.informationphilosopher.com/solutions/scientists/stapp/

We are living in a hologram and the post mortem world is a holographic continuum of the present world according to Michael Talbot, author of 'The Holographic Universe': https://www.goodreads.com/book/show/319014.The_Holographic_Universe

Last word must go, as usual, to Shakespeare when he has Hamlet say -


'There are more things in heaven and earth...
Than are dreamt of in your philosophy.'