Travel writers sometimes tell us to step back from the Costas and seek out something different but usually they direct us to the big cities where we can spend even more money.

There is an alternative, a hidden Spain, well off the beaten track but you need a guide and if you are with somebody who knows then there are some beautiful places hidden away “far from the madding crowd’s ignoble strife.”

One such place is the Cañón del Río Lobos in the province of Soria (Castilla y León) and this really is in the heart of Spain a long way from the usual tourist trails. 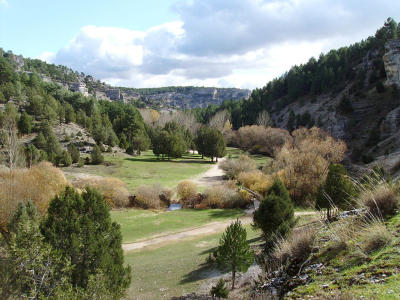 After parking the car, we set off following the course of the river along the pathway among the trees. We exchange greetings with a shepherd and step to one side for him as he moves his flock of about 200 or so raggedy looking sheep (not bred for their wool by the look of them.)

And on we walked for about a mile or maybe more, still following the river, watching eagles and vultures flying above the walls of the canyon. Then we came into a large clearing…. 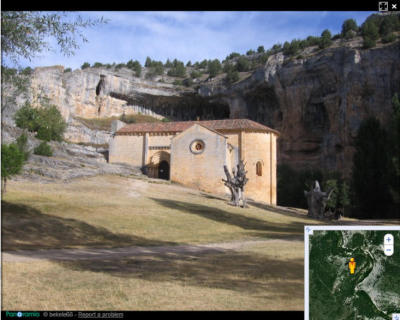 ….and in the distance the San Bartolomé Hermitage. A small chapel, literally miles from anywhere, which is all that remains of the monastery said to have been built by the Templars in the 13th century.

To the right of the picture is la Cueva Grande, the largest of many caves in the valley and this one has a few rock carvings and cave paintings showing evidence of occupation of this area dating back to the bronze age. 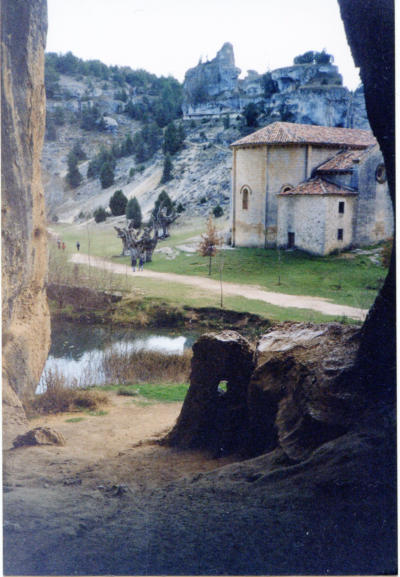 This next picture is also from Google Maps. It is not a painting. It really does look like that, blue and gold striation. Very psychedelic, especially in the sunshine. 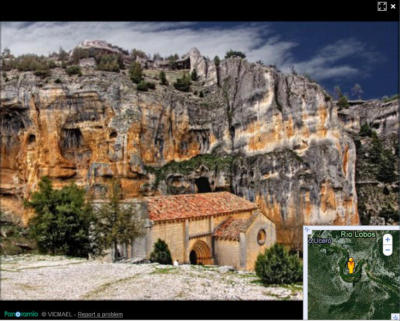 More information in Wiki (in Spanish) -
https://es.wikipedia.org/wiki/Parque_natural_del_Ca%C3%B1%C3%B3n_del_R%C3%ADo_Lobos
And YouTube has a number of videos worth seeing although their commentary is in Spanish, obviously, but the videos do convey some of the atmosphere of the place.
And here is a brief summary of the Hermitage -
https://www.bbc.com/travel/article/20201105-the-templar-hermitage-at-the-heart-of-the-iberian-peninsula