The Dream Of Reason (Revisited), by JD

Nearly seven years on, and after an unexpected result in the 2016 EU Referendum, JD offers this reposting, which first appeared on Nourishing Obscurity here: 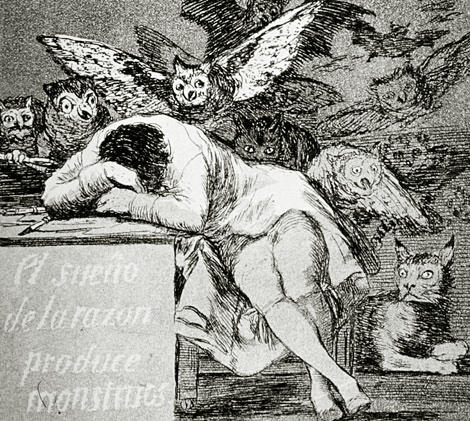 Sueño can mean either sleep or dream depending on the context.

“The dream of reason calls forth monsters” is the correct interpretation.

When you are asleep you are unconscious and brain activity is flat. When you are dreaming, the subconscious is actively creating pleasantries or nightmares according to your inner true nature, as in the scene above.

Goya lived through a turbulent period in European history and, even though he was a proponent of the political enlightenment and freedoms promised by the French Revolution of 1789, he became aware of the Terror that followed, where Reason prevailed and the old ways were swept away.


No one is innocent once he has seen what I have seen. I witnessed how the noblest ideals of freedom and progress were transformed into lances, sabres, and bayonets. Arson, looting and rape, all supposed to bring a New Order, in reality only exchanged the garrotte for the gallows.

After the defeat of Napoleon in 1814, Goya sought to commemorate Spanish resistance to Napoleon’s armies during the occupation of 1808 with this painting. Along with its companion piece of the same size, El dos de mayo de 1808 en Madrid (La carga de los mamelucos en la Puerta del Sol) it was commissioned by the provisional government of Spain at Goya’s suggestion. 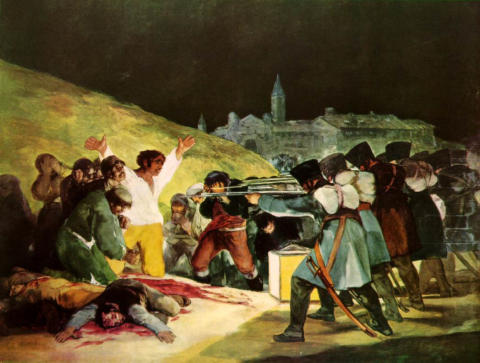 "the ideal of reason does not produce reasonable behaviour"